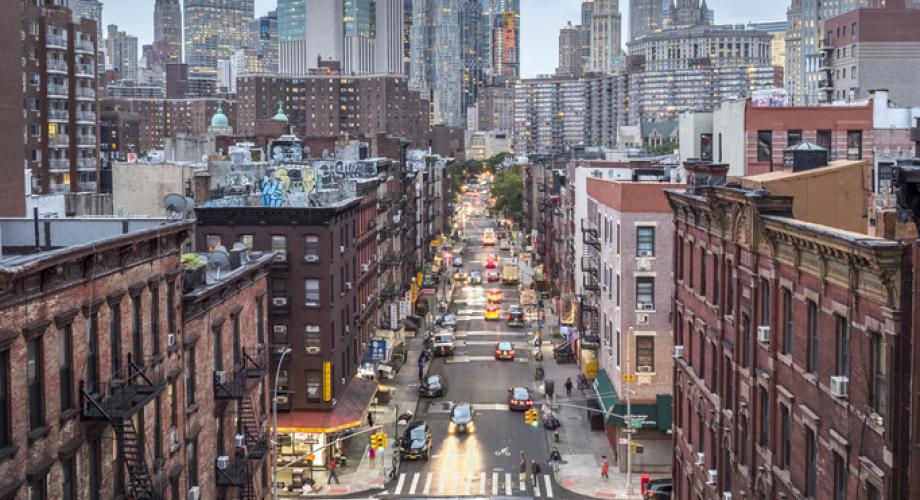 One-third of the apartments that make up New York City’s residential real estate market—valued at more than $2.6 trillion as a whole and worth as much as the gross domestic product of the United Kingdom—just lost 20 percent of their value.

That’s the consensus of apartment market watchers who are trying to quantify the fallout from New York’s recently passed rent control measures, which dramatically limit the dollars owners can spend on renovations at rent-regulated buildings, and thus how much they can increase rents to enhance the value of their assets.

“The law disincentivizes owners from making improvements at their properties because they can no longer recoup those costs through increased rents,” says Robert Dremluk, a real estate attorney and Partner at law firm Culhane Meadows.

That, in turn, is pummeling the valuations of properties caught in the crosshairs of the new rules.

While it will take time for transactions to emerge and actual price discovery to occur in the market, “you’re looking at devaluation of at least 20 percent, or more,” says Paul Mullaney, Senior Loan Originator at New York-based Pembrook Capital, which provides bridge financing to multifamily rehab projects. “Cap rates are going to rise from the 3’s to the 5’s. That’s an enormous value erosion.” (In rental housing arithmetic, when capitalization rates go up, prices go down.)

That stark downward revaluation is happening now because rent control puts one of this industry’s most successful and fundamental investment strategies – value-add rehabilitation – in its crosshairs.

Scenarios such as this could play out nationally in any markets that pass rent control legislation.

“Owners who bought rent-regulated buildings that had low rents and the potential to raise them by making improvements don’t have the incentive to add value anymore,” says Jamie Heiberger Harrison, a real estate attorney and President of real estate law firm Heiberger & Associates. “There’s just no more room to grow.”

No More Improvements in Stuy Town

One major institutional apartment owner already announced it won’t be making any but the most-needed fixes at Stuyvesant Town and Peter Cooper Village apartment community. An iconic landmark of affordable housing in Manhattan originally championed by New York power broker Robert Moses and built after World War II to house returning GIs, the 11,000-unit community was purchased by the Blackstone Group in 2015 for $5.3 billion dollars.

But according to Crain’s New York, Blackstone is now halting any improvements it had planned to make at the community. “In light of the recent legislation, we are in the process of evaluating capital investments at Stuy Town,” a Blackstone spokesperson told Crain’s.

It’s also not the only example of plans to improve the city’s housing stock that has been cut at the knees by Albany’s rent control package.

“We have clients who were already under contract when rent control passed and who are now going back to try to renegotiate those deals, because the original numbers just don’t make sense anymore,” says Mullaney.

Squeezing Investors Out of New York

Together, the new limits put a squeeze on two interrelated measures of rental housing worth – net operating income and net asset value – at rent-regulated buildings. The result is a real estate environment that just two months ago would have been unimaginable in New York: Real estate investors reportedly leaving the Big Apple for locales like Cleveland to put cash to work.

“Investors who would typically be buying and developing properties in the New York metropolitan area are looking to Texas, Florida, Cleveland and other markets to put their money into residential properties there,” Dremluk says. “They’re abandoning the New York market because they don’t think they can make money here anymore.”

What Rent Control Does

The changes, passed in June, limit how much owners of rent-regulated apartments – or approximately 1 million of the 3 million total units in New York – can invest and recoup for improvements at their buildings.

Previously, upon vacancy of a unit, owners could make improvements and then increase the rent by as much as 20 percent. If that pushed the rent over a certain threshold, the apartment could then be de-regulated, and return to being classified as a market-rate unit.

But the new rules eliminate that provision, as well as the 20 percent vacancy bonus, while limiting how much owners can spend on improving individual units to just $15,000 over 15 years.

Previously, there wasn’t a cash limit on upgrades, and owners could raise rents by 1/40th of the cost of improvements in buildings with less than 35 units, and 1/60th in building over 35 apartments. Those ratios now change to 1/168 and 1/180, respectively, under the new rules.

For major capital improvements that affect an entire building – such as common area renovations, a new roof or central air conditioning system – owners previously were allowed to increase rents by as much as 6 percent per year for all residents to recoup added costs. But that type of increase is now capped at just 2 percent per year.

For owners who want to forgo running rental housing altogether and convert their building to a co-op or condo, the new rules made that significantly harder, too: Owners will now need 51 percent of residents to sign off on a proposed conversion, versus 15 percent under old rules.

“Having worked on many of those transactions during the last 20 years, that is an extremely high threshold,” Mullaney says. “If you need 51 percent of tenants, you’re basically not going to see any more co-op or condo conversions in New York.”

Bronx and Harlem: The Ghost of the 1970s

The result, say apartment financiers and dealmakers, is likely to be a calcified deal market – Bloomberg is already reporting sales at a standstill -- where owners of rent-regulated buildings stop investing in anything but the most basic and immediate maintenance needs required by law, such as health and safety issues, leaking pipes or clogged drains.

“The unintended consequences of this means the quality of the apartments is going to decline due to deferred maintenance or a lack of incentive to improve them,” Dremluk says. “These buildings are going to get worse.”

The final outcome, many say, could be a return to 1970s-era images of hollowed-out buildings in disrepair, especially in the Outer Burroughs – the very circumstances that led to prior reforms to allow owners to make improvements to buildings and raise rents in the first place. “The Bronx was finally getting better, and now it’s going to fall apart,” says Heiberger Harrison.

Adds Dremluk, “We may go back to what Harlem looked like 20 years ago.”

Aside from owners pulling back on improvements at their properties, the changes could also have some drastic effects on deals that have already been done.

For instance, in a typical rehab deal, a borrower might be able to secure as much as 65 percent to 70 percent of an asset’s value to buy it and make improvements.

Those loans are typically made by short-term bridge lenders, who hold the note at a higher rate until the improvements are done, usually two to three years. Then, when owners raise rents and increase the value of the asset, they can seek permanent re-financing on the building at a lower interest rate and lower loan-to-value (LTV) ratio based on the new, higher valuation of the property.

But with that mechanism now effectively dismantled by rent control, many owners who recently went into rehab deals are now sitting on short-term debt that will eventually need to be paid off. Whether they’ll be able to secure longer-term financing without getting a boost in asset value from improvements is anyone’s guess.

“For portfolios that were acquired using short-term, floating rate debt, my feeling is they may have a very hard time refinancing or getting out whole, without forcing the owner to sell,” says David Eyzenberg, President of New York-based investment bank Eyzenberg & Company, and a finance professor at New York University’s Stern School of Business.

Indeed, market jitters over existing loans already played out when rent control was first announced in June. Immediately after the new rules were adopted in Albany, several community banks that lend to apartment companies saw their stocks take a hit. The reason why, observers explain, is because the basic premise behind the existing loans on banks’ books had effectively been erased overnight when values on underlying assets tanked.

“The senior lender who was at 65 percent leverage may find themselves at 85 percent to 90 percent leverage when these deals trade,” Eyzenberg says. “They’ll make it out, but at a similar or worse LTV than they signed up for. That’s why the banks take a hit. There’s now a heavy preponderance of these loans where there’s no clear view of how you’re going to exit in a better position than you are in today.”

That means, just like the owners who took out the loans, the banks who made them may have a hard time finding another, long-term lender to replace them in the deal stack. Much like single-family homeowners who were unable to re-finance subprime teaser mortgages when housing collapsed in 2008, rental housing owners of these assets could now be in the same spot.

Going forward, that means banks are likely to lend less, based on an asset’s existing cash flow, or only at rates that won’t be sustainable for apartment owners.

“Instead of being able to get a 70 percent loan to value, you’ll only be able to get a 50 percent cost to loan,” says Mullaney. “There just won’t be any cash flow there to underwrite.”

That means owners – if they enter into new deals – will need to make up the difference with so-called “hard” money at higher rates.

The outcome of those deals would likely be cash buyers taking out assets at depressed values, and then simply managing the existing cash flow, without making any improvements to the property.

“Cash-rich companies will come in and scoop it up at 60 percent of the value of the building, and say take it or leave it,” says Dremluk. “It turns the process of valuation into a situation where you have a focus on just the cash yield of the property. The business will turn into just managing occupancy.”

Beyond New York City, the real concern now is that other cities in New York State will adopt similar rules, which is an option under the new law from Albany. Owners groups are currently fighting the new regulation in court.

“They left the window open that this can creep into other markets where it’s not currently enacted,” Eyzenberg says. “This could spread.”