Looking back at 2019, the apartment market wrapped up a historically strong year on numerous fronts, including rent growth, absorption and occupancy rates.

Apartment fundamentals seasonally subsided during Q4 2019, yet levels remained healthy. Occupancy inched up 0.8 percent annually to 95.8 percent, according to RealPage. St. Louis had the greatest year-over-year change in occupancy, up by 140 basis points. The unemployment rate for St. Louis was 3.0 percent as of November, as reported by the Bureau of Labor Statistics. Employment in mining, logging, and construction had the largest annual increase by nearly 8.0 percent. 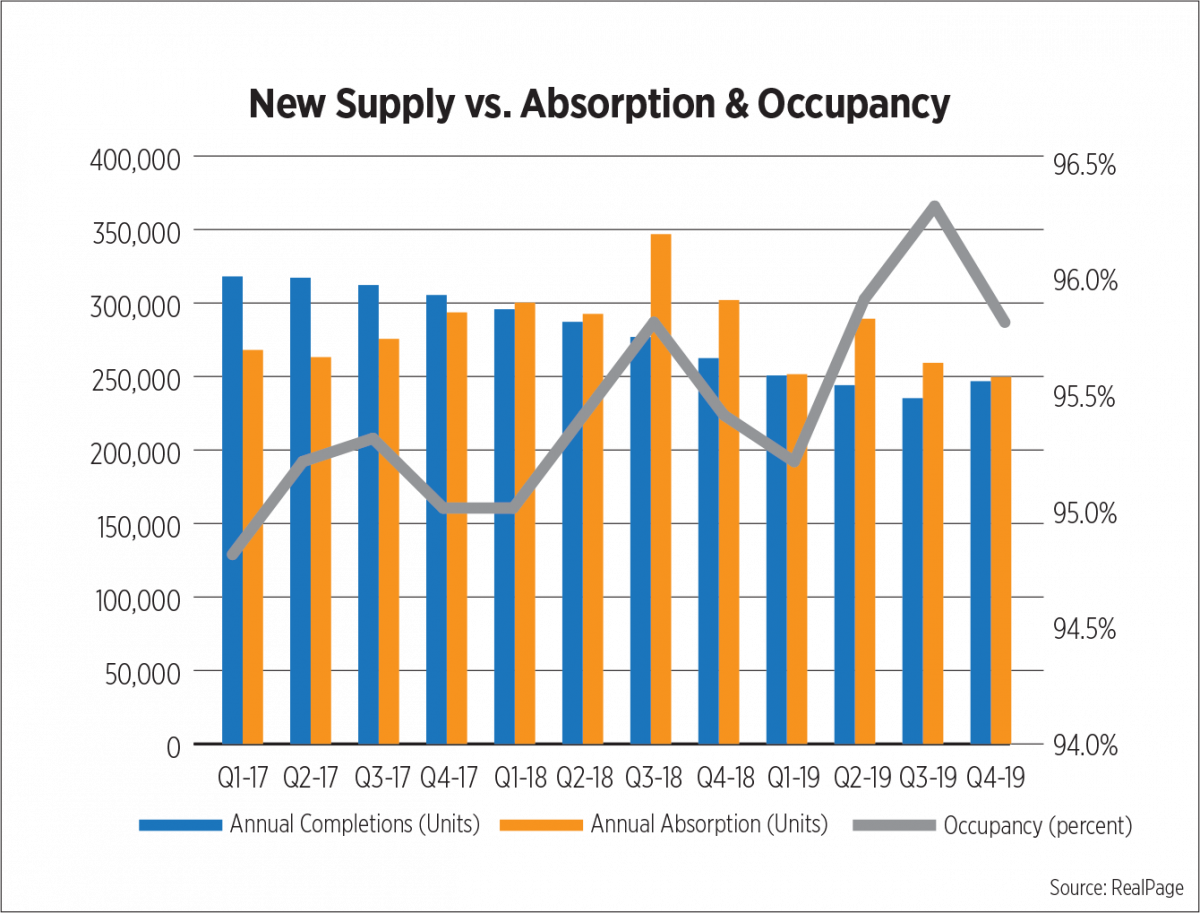 With tight occupancy and absorption consistently high asking and effective rent averaged $1,498 and $1,426, respectively, as reported by Reis. Annual rent growth averaged 3.7 and 3.8 percent but was the lowest growth rate in more than two years. Secondary markets including Knoxville, Phoenix, and Raleigh led the U.S. in annual effective rent growth, all surpassing 6 percent increases. Charleston, Chattanooga, Tucson, Pittsburgh and Phoenix ranked as leaders in rent growth since the previous quarter. On the opposite side of the spectrum, San Jose, Northern New Jersey, Richmond, New Haven, and Fairfield County saw a decline in rent growth. 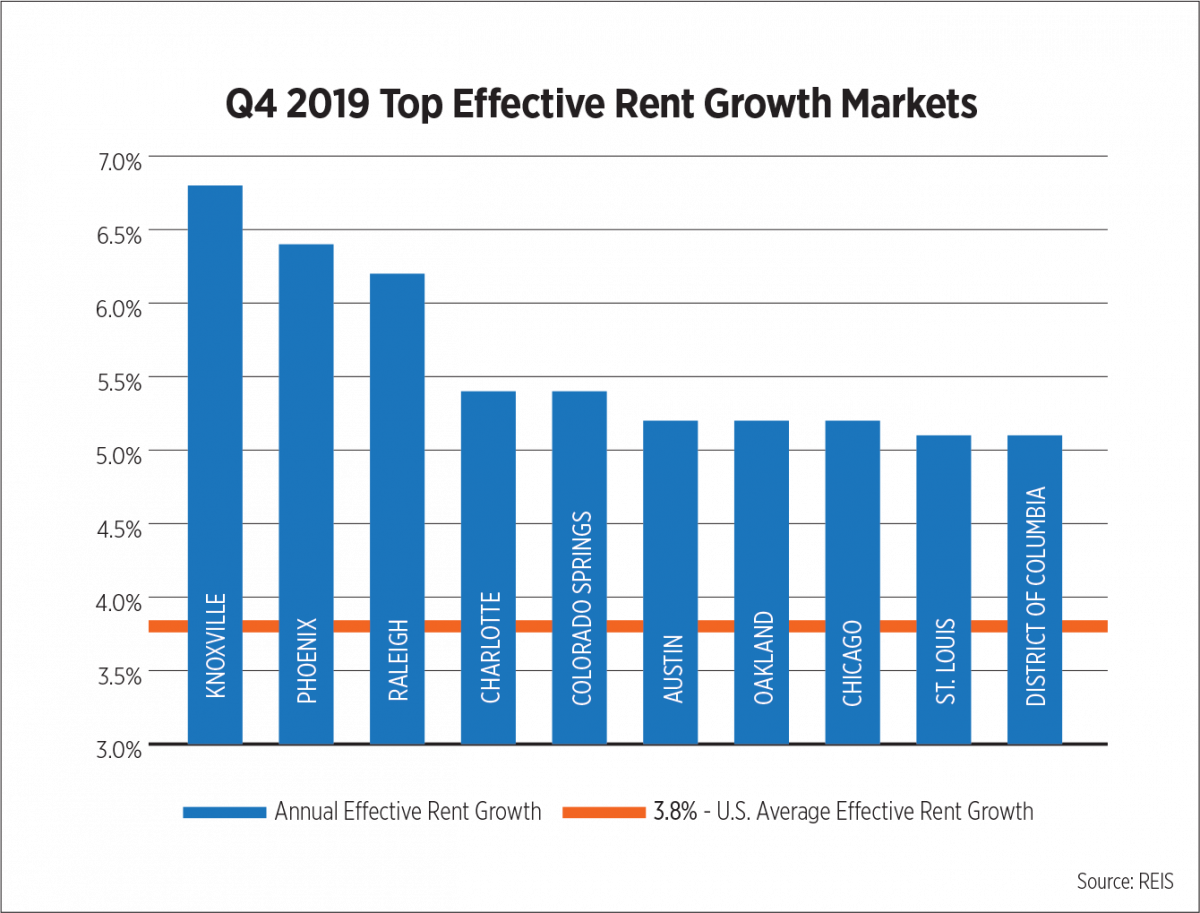 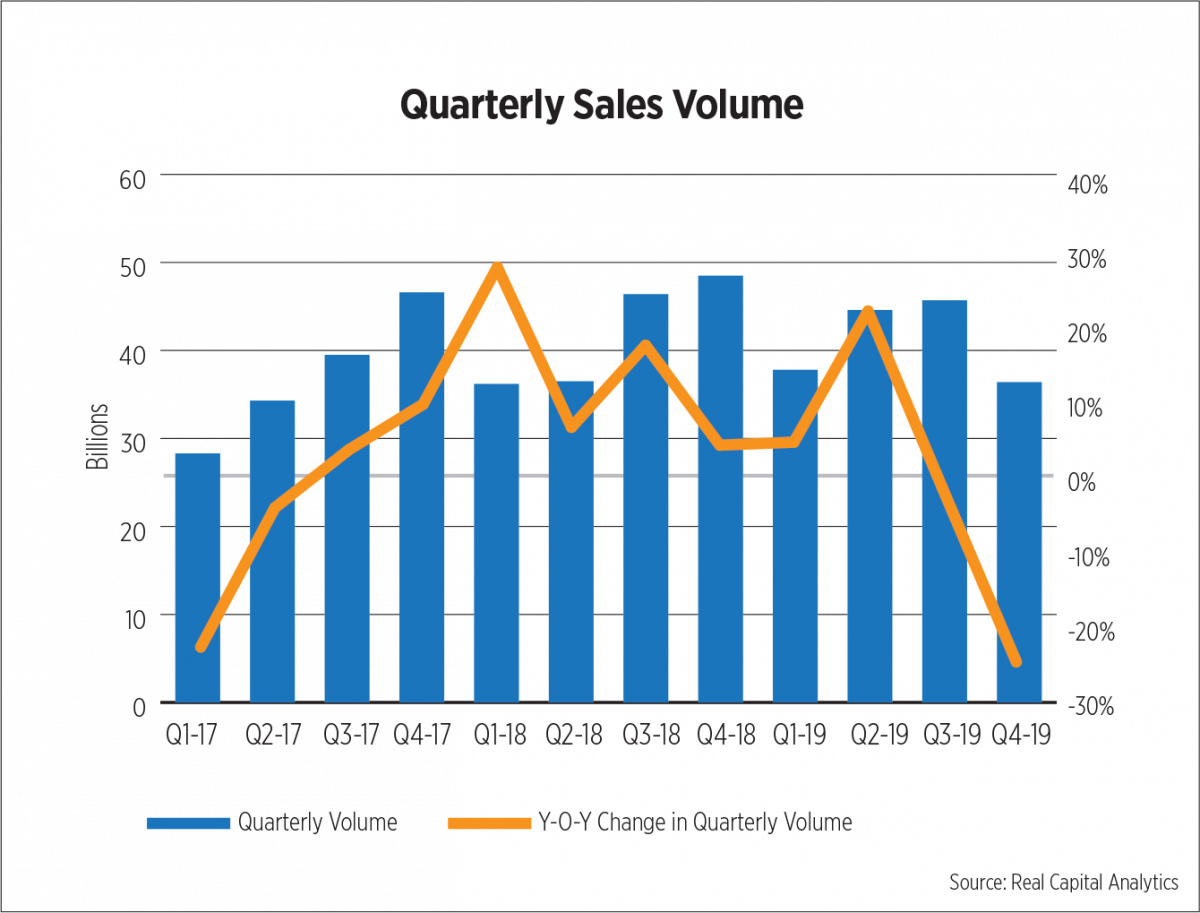 Sales volume in Seattle secured the largest year-over-year increase among major markets, up 55.2 percent totaling $7.5 billion in closed apartment sales. According to CoStar, record sales volume occurred during the middle of Q4 2019 for Seattle as investors were motivated to close on deals due to a recent change to the statewide real estate excise tax. Starting January 2020, taxes on properties trading for more than $1.5 million will increase. Washington DC, Atlanta, Phoenix, and San Francisco were among the other major markets which experienced sales volume growth since Q4 2018. New York City, Los Angeles, Dallas, Houston, and Denver all posted a decline in sales volume. 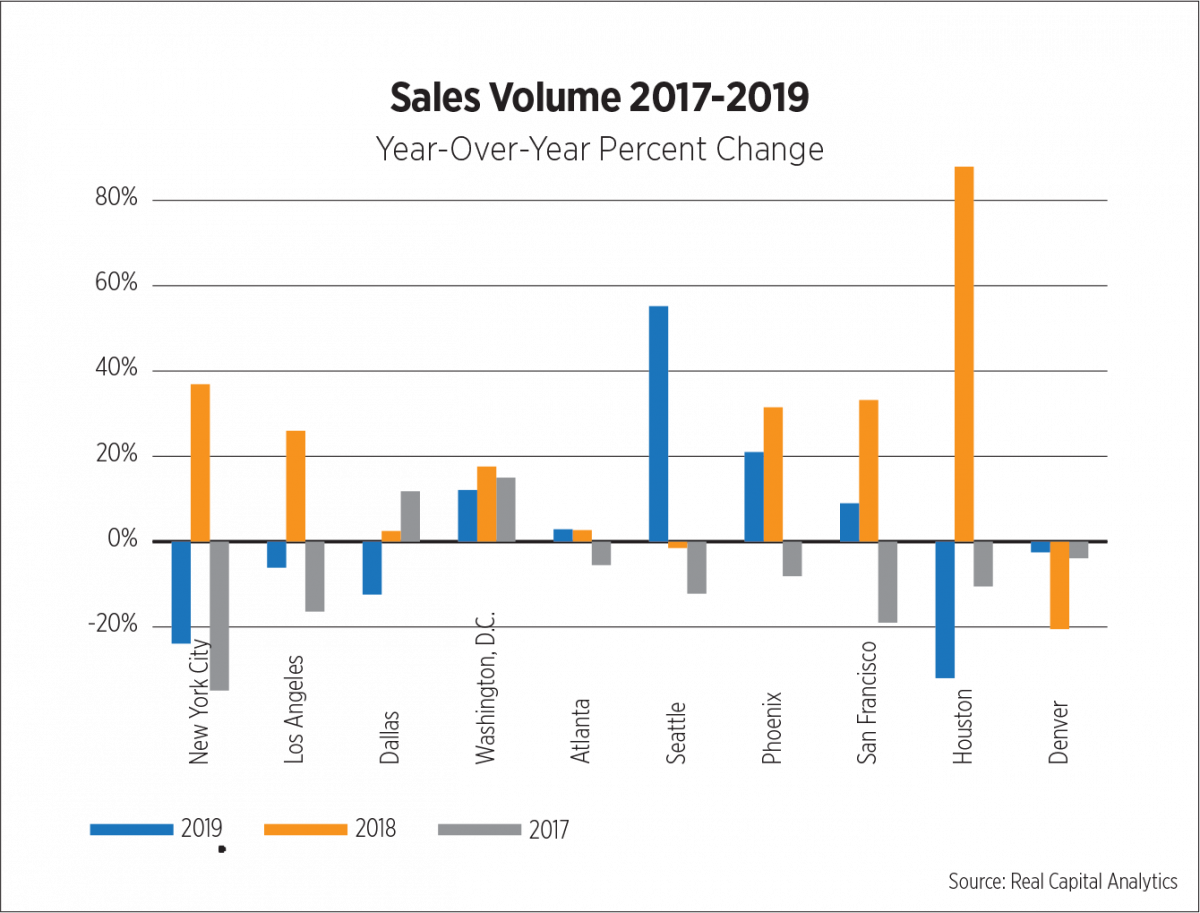 The U.S. Economy ended the year with solid, if not exceptional, fundamentals. Monthly job gains averaged 176,000 jobs, down from the 2018 level but in line with a 50-year low unemployment rate. The fourth quarter advance estimate for real Gross Domestic Product (GDP) increased 2.1 percent, bringing the 2019 total to 2.3 percent.  While this level of growth was anticipated, it was disappointing compared to the 2.9 percent growth rate of 2018 and growth that topped three percent during the first three months of 2019.

Consumers continued to lift the economy with optimism and consequent spending. In 2019, consumers were responsible for over 76 percent of GDP growth. Business investment, on the other hand, contributed just 14 percent to economic growth and actually decreased for the past three quarters. Uncertainties surrounding the trade wars were largely responsible for businesses putting the brakes on spending. The mid-January trade agreement between the United States and China should go a long way in helping to alleviate some of those concerns, but with a 2020 Presidential election on the horizon, the coronavirus all but shutting down China and the global economy on shaky ground, any revived optimism may well be short-lived. 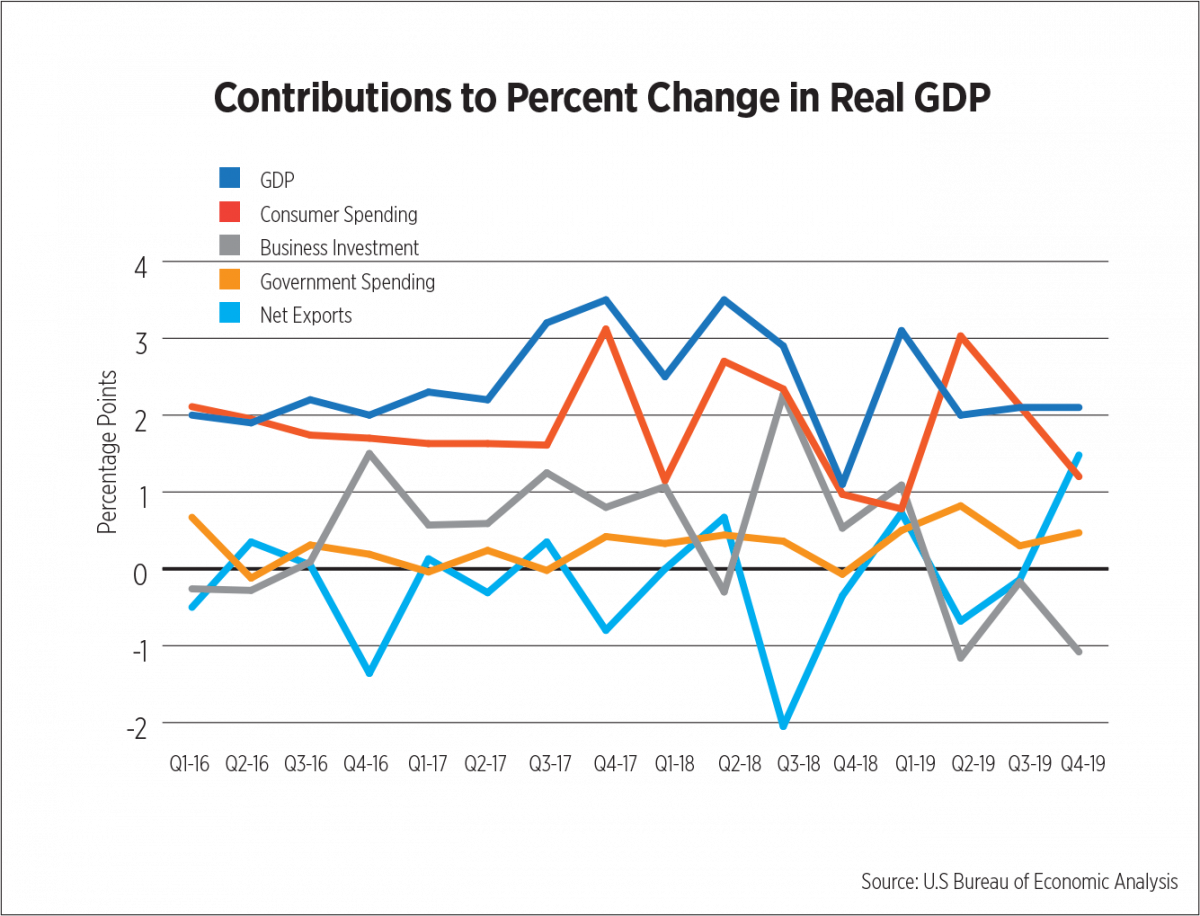 Although overall average wage growth has been relatively stable, breaking down wages by quartiles reveals stronger growth for the lowest-income earners.  According to the Federal Reserve Bank of Atlanta’s Wage Growth Tracker, which uses micro-data from the Current Population Survey, the bottom quartile of wage earners experienced growth in excess of 4 percent for the past 17 months. 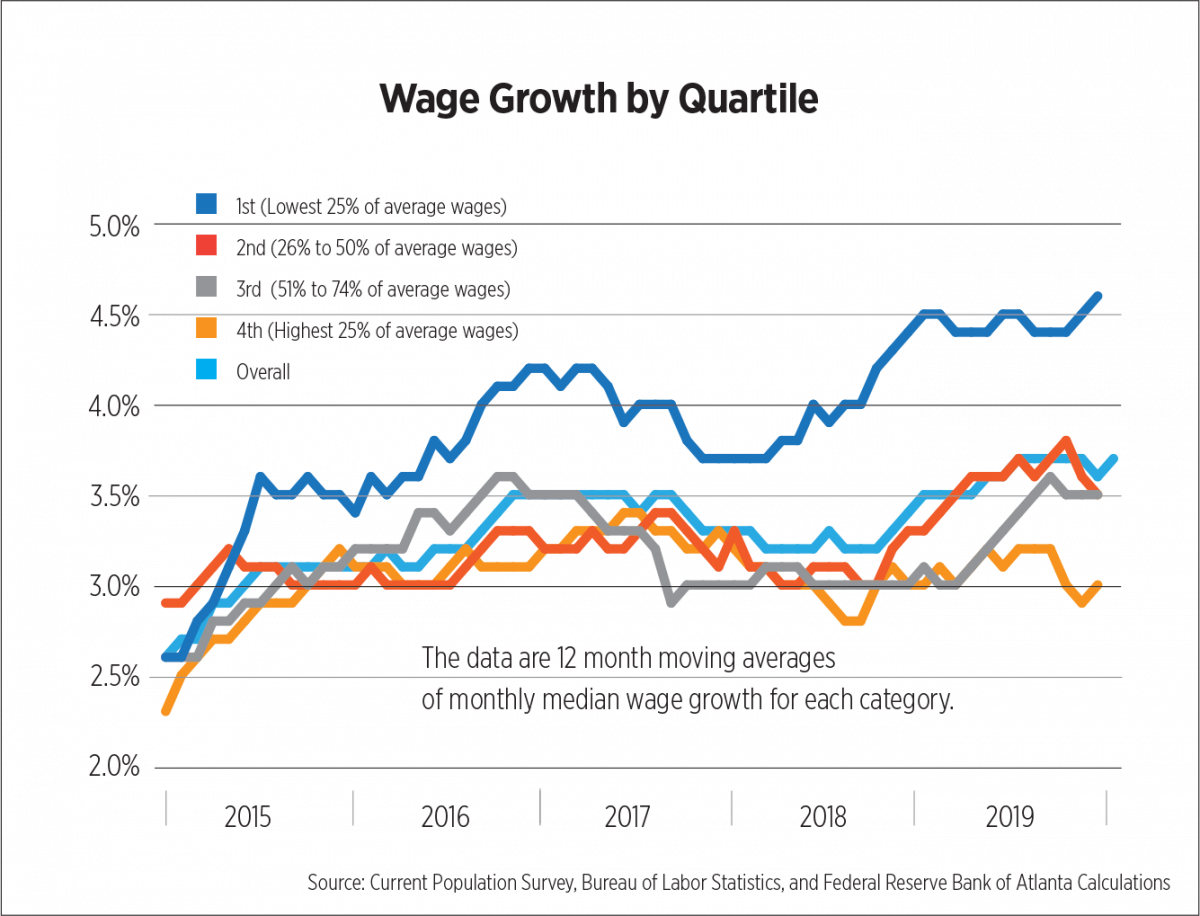 Retail sales were another strong indicator at the end of the year, growing 5.8 percent year-over-year in December, as reported by the Census Bureau. The results suggested a stronger holiday season than was anticipated and was a stark contrast to the paltry 1.5 percent growth at the close of 2018.

Recession fears have quelled somewhat between an economy that continues to grow and the truce in the trade war. With the run up in financial markets also contributing to optimism, most economists have pushed predictions for the onset of a recession to late 2020 or fully into 2021.

After floundering in the 64 to 65 percent range for eight quarters, the homeownership rate increased to over 65 percent during the fourth quarter, the highest level in six years. Despite this uptick, the apartment market is expected to sustain strong demand in 2020.  Single-family construction is projected to rise, but the supply of existing single-family homes, typically more affordable to first-time home-buyers, remains tight. Demand from young adults living with their parents, spurred by a healthy job market and rising wages, should help fuel new rental household formations.

On the supply side, permits for properties with 5 or more units ended the year at a seasonally adjusted annual rate of 474,400, the highest level since 1986.  Although downward pressure on occupancy rates can be expected with an influx of new apartments, persistent construction delays, due to increased costs and labor constraints, will help demand keep a relatively steady pace with new supply.