BH gets creative with benefits to recruit and retain talent.

Embracing its employees—along with their babies—is a hallmark of BH Management. Visit the offices of this Des Moines, Iowa-based operator of 90,000 apartment homes across 305 apartment communities, and you’re as likely to see a baby nestled in the arms of Mom or Dad as you are spreadsheets, bar charts and operational dashboards projected onto a conference room screen.

In its race to recruit and retain more employees, BH, which has a 63 percent female workforce, has opened its offices to staff members’ newborn babies to provide a work-life balance benefit.

“We have three babies who are graduating from our babies-at-work program this December, and we have six more coming to our Des Moines and Dallas offices in 2020,” says President and CEO Joanna Zabriskie, who championed the program, with all the enthusiasm of a proud parent. “We really need to think about this differently to make a social impact.”

Zabriskie, when introduced to the idea by a colleague at a luncheon, initially dismissed it. “When I first heard about the babies-at-work program, I thought it was a terrible idea, frankly, because babies are loud, they're messy and they're distractions,” she says. But just like a newborn cooing for a parent’s attention, the idea wouldn’t leave her alone.

“I couldn’t stop thinking about it,” says Zabriskie. “I kept wondering if it’s possible to do work-life balance differently than previous generations have done it. I wondered, 'could we make that transition easier for new parents to come back to work, especially in this low-unemployment economy, and spend more time with their babies?'” 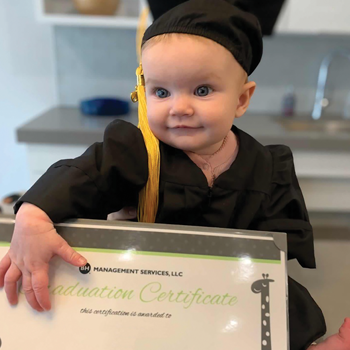 The result for BH is now a formal, 12-page HR policy, complete with guidelines for what to do with fussy infants (a quiet room has been set aside for outbursts of more than five minutes), as well as designated alternate-care providers [BH employees], who can take over for parents when they need uninterrupted time to focus or even just enjoy a hot lunch. The program is designed for parents to bring babies to work after their three months of maternity or paternity leave, and for the babies to stay until they’re six months old or become mobile, whichever comes first.

“We know how valuable this program is—it’s not something that's offered to a lot of our friends in other industries,” says Jessica Grandstaff, a Midwest Regional Trainer at BH, and a designated alternate-care provider, who describes herself as BH’s happiest employee. “I get to snuggle with a cute little baby four days a week.”

The firm’s first employee to participate in the program—Allison Nielsen, BH’s Director of Training and mom of newborn Cole Nielsen—was anxious on day one and afterward.

“I was a little nervous,” Nielsen says. “Not only would I be in an office with a baby, I would be responsible for him and all of the disruptions he may cause. I had a hard time wrapping my mind around how I could work and be productive and still be present with him as a parent.”

But Zabriskie made sure to welcome Nielsen personally on her first day back from maternity leave with Cole, and the workforce at BH’s headquarters made mom and baby quickly feel right at home.

“There was just the warmest reception from everyone, stopping in or, when I’d go down to the employee café to get coffee, asking how he was doing,” Nielsen says.

Her nerves calmed down about two weeks into the program, when she and Grandstaff, Cole’s alternate-care provider, were on a conference call and Cole rolled over in his Pak-n-Play for the first time. 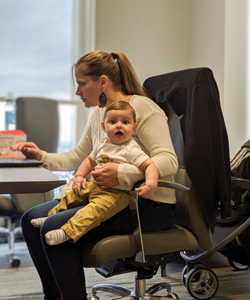 “That’s when the enormity of this opportunity really hit me, that I would have missed that milestone moment if he was at daycare and not with me,” Nielsen says. “Then, when we announced it on the call, the team was also just so excited that they asked us to put him on the video chat because they wanted to see him, too.”

Zabriskie says taking time for those kinds of moments during the day has benefited her company far beyond the minutes it may have initially diverted from work-related tasks.

“We really wanted to make sure that babies would fit into work and that we would all still be productive,” Zabriskie says. “What we’ve found is that it’s just added a little bit of joy to that productivity.”

It’s also resulted in some pretty surprised reactions from others in the workplace. “I can't tell you how many times I've ridden up in the elevator with Cole in the stroller, and someone asks, ‘Oh, is it bring-your-baby-to-work day?’ And I say actually, it’s bring your baby to work for three months. They can’t imagine it.”

Cole has even been present in meetings with BH clients.

“We’ve had investors come through and their eyes open really wide,” Zabriskie says. “But nobody’s pushed back about it; they think it’s great. It’s just that nobody can actually imagine doing it.”

As 2019 came to a close, so did Cole’s time at BH headquarters as he approached his six-month birthday. The company gave him a graduation ceremony, complete with a baby-sized cap and gown.

“But the ceremony’s not really for the baby, because he won’t remember it,” Zabriskie says. “It's for the rest of the office to say goodbye and to acknowledge the relationships that we've built with the child. We’re going to be sad to see Cole go.”

At BH Management, it’s just another life stage, a milestone moment that an increasing number of parents will get to experience by having their babies at work.

Bring-Your-Baby-to-Work Day—Every Day!
BH gets creative with benefits to recruit and retain talent.Embracing its employees—along with their babies—is a hallmark of BH Management. V...
Read More
Marketing to Gen Z
During the past decade, companies have spent a lot time and energy figuring out Millennials. As this has happened, a new generation – Generati...
Read More
Tips on How to Manage Parents' Expectations
It's hard enough to manage the expectations of the young people living in your student housing communities. Owners and operators in our business,...
Read More
How to Figure Out When Your Air Conditioner Will Break
Operators use analytics to boost portfolio performance.Joanna Zabriskie found a way to beat the heat this summer. By leveraging operations...
Read More
Millennials Aren’t the No. 1 Demographic for Social Media Use
The demographic cohort that spends the most time on social media might surprise you. Nielsen, the prestigious data firm that tracks consumer...
Read More