Green Roofs Coming to a City Near You

Denver voted in its Green Roof Initiative even though developers estimated that green roofs would add costs of $15 per square feet and more.

Is your city next? Buildings in Denver of more than 25,000 square feet must now build out a portion (20 percent to 60 percent, depending on the size of the building) of their building’s roof space as green—or dedicated plant space.

The new building code, which officially went into effect Jan. 1, requires that all new buildings constructed on or after this date dedicate a portion of their roof to green space. The space can include plant material, a community garden, urban agriculture or similar treatment.

The code also requires that all existing buildings greater than 25,000 square feet and taller than four stories high add green space to their roof at the time of normal roof replacement.

Failure to comply with the mandate will result in fines, imprisonment, or both, states the ordinance.

Exemptions include Energy Star-rated buildings, schools and buildings deemed unable to handle the structural load required and buildings that are 100 percent solar.

Still, many buildings will be required to comply with the new law with the cost falling on the developer or building owner.

Cost is the main concern surrounding such an initiative. Green roofs can cost as much as $15 more per square foot than traditional roofs.

Denver joins San Francisco, the only other U.S. city to effect a mandatory requirement of green roofs on new and existing buildings. At present, a larger number of cities across the country offer incentives for those building or retrofitting green roofs, to encourage their use.

There is no doubt that this initiative will impact both on our environment and the construction environment in Denver. Will your city be next to adopt this requirement? —Lori Hanson, Greystar

Green Buildings from the Top, Down

Green roofs—solar, garden and combination—are making their way across the country. As owners and operators assess what such measures add to the cost of multifamily construction and retrofits, many wonder about the benefits, detriments and pay-offs of this latest regulatory trend.

Green roofs are nothing new. The first were constructed around 500 B.C. The Hanging Gardens of Babylon are one of the Seven Wonders of the Ancient World. Centuries later, Europeans insulated their roofs with sod to keep homes cool in the summer and warm in the winter. Today, Germany is the leader in green roofs—12 percent of all its flat roofs are green, a number growing by 10 percent to 15 percent each year.

While green roofs can include both solar and vegetation, most recent laws specifically mandate garden roofs.

As more cities work to meet their mandated conservation thresholds, looming deadlines have caused some to replace incentives and rebates with laws and mandates.

Denver residents voted in its Green Roof Initiative even though developers estimated that green roofs would add costs of $15 per square feet and more to roofs, with slow or no fiscal recovery. And while the benefits of garden roofs are environmental and social, their up-front costs are borne by developers.

Further complicating apartment business models is the fact that the new Denver rules apply retroactively to product already in the pipeline.

Historically, incentives have provided some balance to the cost equation, making it possible for builders to make deals pencil financially. Regulations, on the other hand, can be burdensome and may create financial models that do not work, thereby impeding development.

Carnegie Melon research suggests that, while green roof installation and maintenance costs more, the social return to some apartments may be favorable. Property location, climate, cost of energy and type of green roof are all important factors in achieving a positive payoff model.

Yet, it’s a moving target. While not all locations currently provide good financial models for green roofs, technology, costs and processes continue to evolve. The technology could eventually mature to be cost effective on a wider scale, while providing social benefits in presently tough-to-pencil climates.

Not all green roofs are the same. Planted roofs are classified by soil depth, load capacity and function. Extensive green roofs may include thinner soil depths, meaning less weight, expense and maintenance.

Intensive green roofs are built with deep soil and many layers. They are more costly and require significantly higher maintenance. A combination of solar panels and vegetation has been shown to improve the performance of both.

There are property owner advantages to green roofs: Rooftop gardens provide greater control of storm water runoff, deliver a longer lifespan over asphalt and provide credits toward LEED and other green certifications.

Benefits to residents include better building insulation from climate and noise (10 percent to 30 percent, per the EPA) and, in some cases, community garden features. Urban neighborhoods benefit from a reduction of the heat island effect, improved air quality through increased oxygen/carbon dioxide exchange and biodiversity that provides spaces for birds, insects and wildlife. 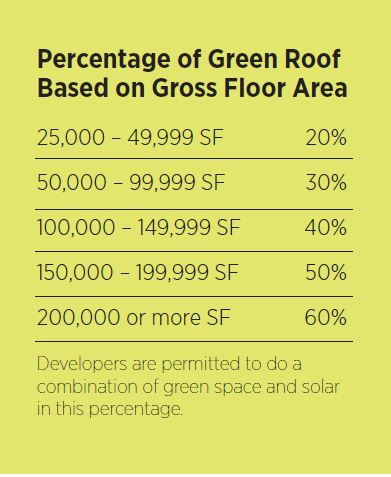 Green roofs offer a longer useful life than conventional roofs through the protection of the waterproof membrane from ultraviolet light. Plants and the substrate act as a natural barrier from weather. The green roofs of Rockefeller Center in New York City still have the same waterproofing membranes that were installed in the 1930s.

It’s hard to know how Denver’s Green Roof Initiative will affect the city’s rental market. Economist Greg Willett with RealPage has projected another 12,000 apartments to come online this year.

Denver’s Initiative requires that all new buildings constructed after the first of this year dedicate a portion of their roofs to green space. Existing residential buildings greater than 25,000 square feet and more than four stories must add green space at the time of normal roof replacement.

Lori Hanson, CAPS, CAM, is Manager, Client Services, Greystar. Journal of Utility Management, Spring 2018 is produced by RealPage and is published at utilitysmartpro.com.

South Miami Requires Installation of Onsite Solar at Apartments
On June 18, the South Miami City Commission passed an ordinance to require developers and operators to install solar technology in...
Read More
Green PHA Unveils First LEED-Certified Development in North Philadelphia
Philadelphia Housing Authority  Nichole Tillman, 215/888-2869 PHILADELPHIA  May 10, 2012  The Philadelphia Housing Authority h...
Read More
The Transformation of Parking
Multiple factors are converging to disrupt everything we know about parking: Its physical structure, format, design, cost and, perhaps most important,...
Read More
Kansas City to Become Latest to Require Energy Benchmarking and Disclosure
KANSAS CITY, Mo. - The Kansas City Council is the latest local governing body to require multifamily building owners to track and report their...
Read More
Average Costs for Adding a Bedroom
As anyone who’s ever rented a studio apartment knows, having that separate bedroom can be a real life-changer. But in high-rent cities, the ext...
Read More