Mismatches in Renter Searches and Reality

Searches on Apartments.com indicate renters are usually looking for a deal that may not exist, according to a new analysis of that search data. On average, the typical user searches for a maximum rent that is less than the actual average rent for a given area. In fact, there is roughly a 12 percent premium between average one-bedroom rents and the average maximum rent for which searchers on Apartments.com look. Searchers want the best price—and who can blame them?

For the vast majority of areas, searchers undershoot, purposely or not, the actual average rent. But averages rarely tell the whole story. For about a quarter of the areas, potential renters enter maximums that are higher than the average rent. These include improving neighborhoods such as Royal Oak, Michigan, one of the strongest submarkets in Detroit, where nearly a quarter of residents are ages 20 to 34, Bronzeville in Chicago, near the eventual Obama Presidential Library and Uptown Houston, where The Boulevard Project, a redevelopment project that includes infrastructure improvements, is sparking construction.

Most areas, though, attract maximum search rents that undershoot the area average. This includes the predictable parts of the rental world, where rents exceed the ideal spend. Boston, New York and various areas of California dominate the list of the largest spread between real and searched-for rents. A Greenwich Village one-bedroom in Manhattan averaged rents around $4,330 a month in the second quarter of 2019, yet the average searcher over the past year maxed out their searches at around $2,820 per month. 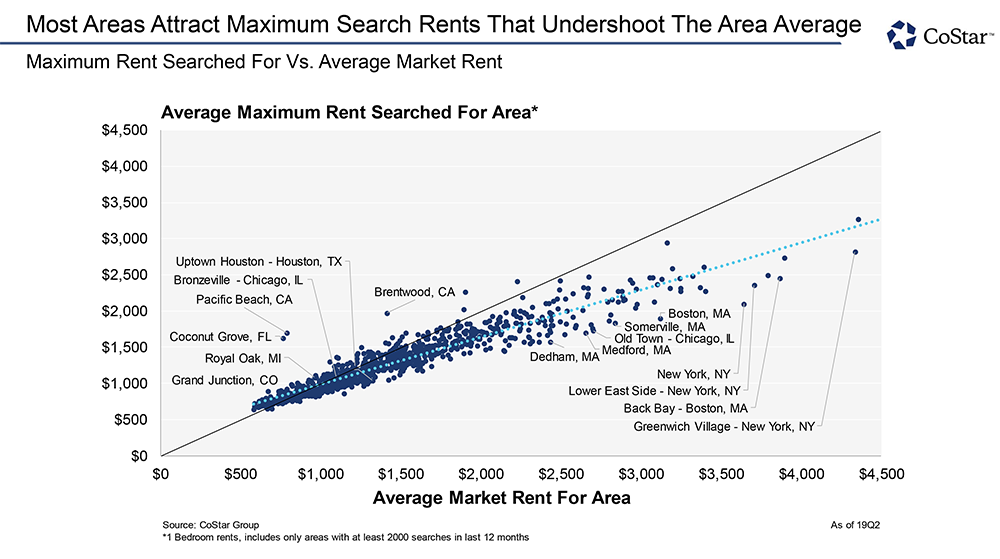 Indeed, the more expensive an area is, the more searchers look for lower rental costs. Areas that have average rents between $2,000 and $2,500 have an average premium of real, over searched-for, rents of 22 percent. The premium for areas that average $1,000 to $1,500 is only 8 percent. No area that averages more than $2,500 in one-bedroom rents has renters searching for maximums above the market average.

Furthermore, the overshooting and undershooting of rents correlates to the percentage of income spent on rent. The more expensive an area as a share of income, the less likely a renter is to overshoot rents with their max search. Linear regression predicts that in areas where a renter pays about 25 percent of their income on rent, searchers will plug in a rent that is only 83 percent of the average. At about 11 percent of income spent on rent, they match their max search with the average (Note: These rent-to-income ratios purposely exclude any instance of affordable, discounted, or reimbursed housing). 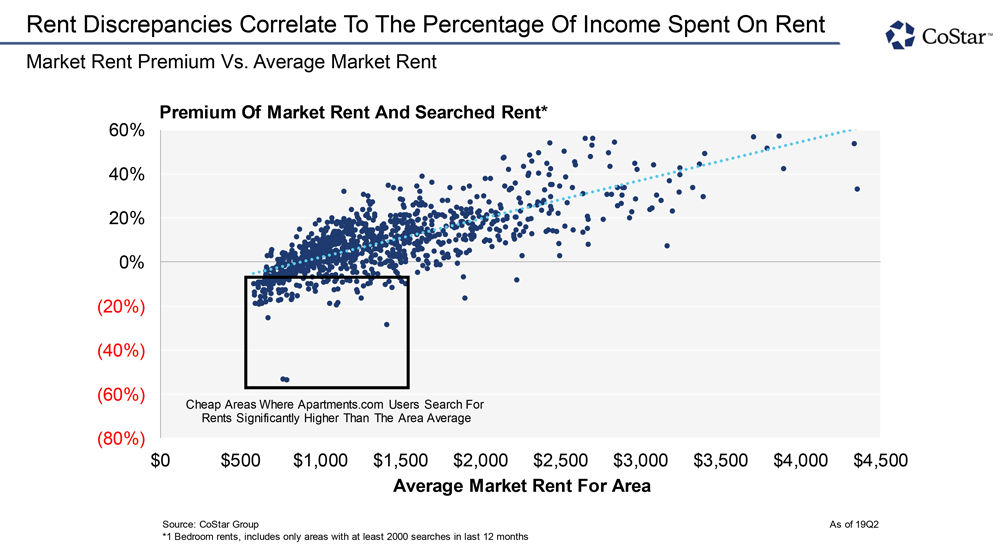 Developers seem to be responding to renter demand. The number of units under construction is increasing across the board, but it is increasing faster in those low-cost areas, where renters are searching for rents higher than the average over the past year. This in part reflects developers spreading out to new frontiers, seeking cheaper land; but it also reflects renters’ willingness to spread out as well in search of cheaper rents. 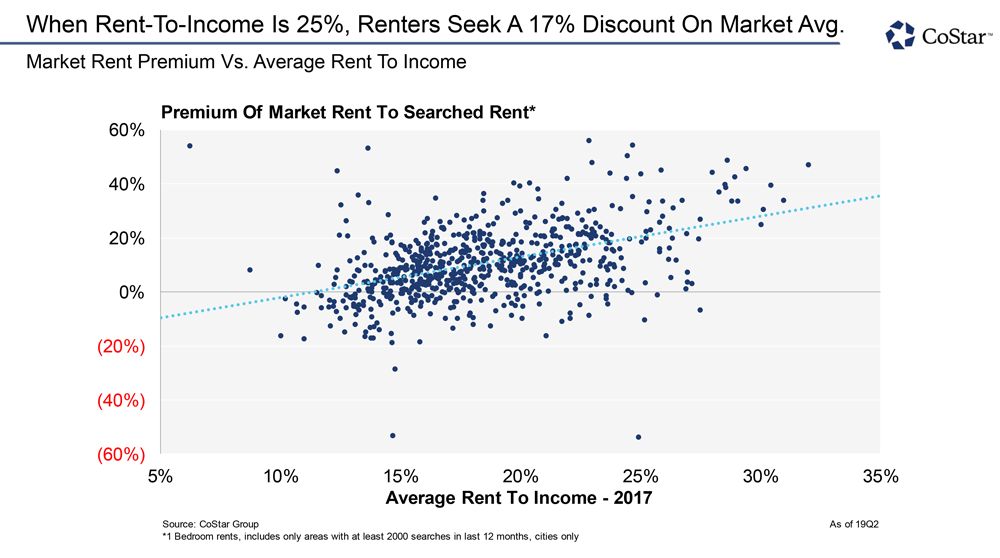 These analyses indicate that Apartments.com searching can somewhat predict areas that are heating up. At this point in the cycle, affordability is becoming paramount. Digging a little deeper into rent to income numbers reveals that overall rent-to-income ratios increased from 16.3 percent to 18 percent during the period from 2010 to 2017. But for households earning $25,000 to $35,000 that increase was 25.9 percent to 30.9 percent, pushing them on average over the recommended spend on housing. Geography can worsen the story. For example, households in the $50,000 to $75,000 band on Long Island saw their rental spend jump from 26.3 percent to 32.9 percent. 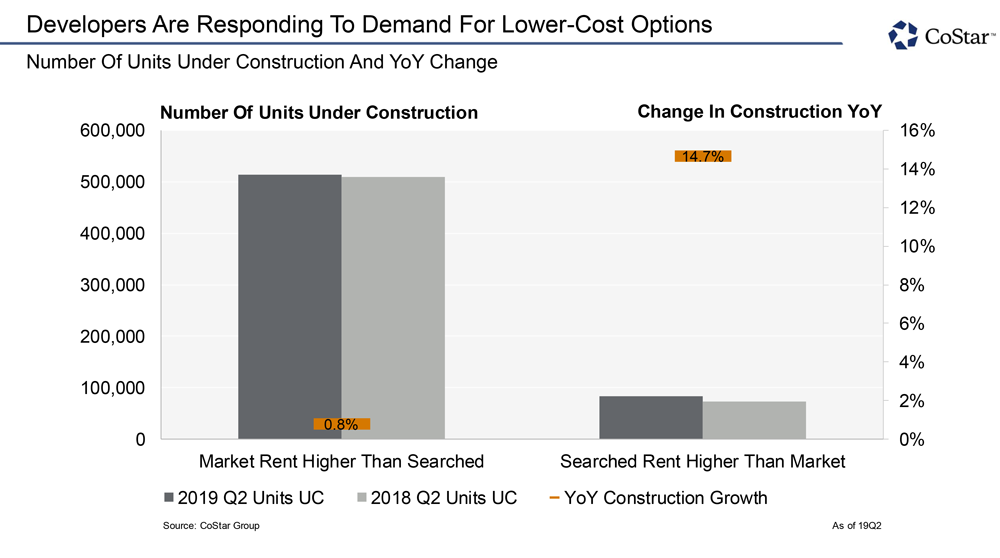 Paying attention to the areas that are cheap but attracting new renters who are willing to pay more than the market rate, can work well. The relatively high increase in units under construction in areas where searchers overshot rents show that many developers already know this.

Atlanta Market Ripe for Investment
Atlanta is the No. 3 market for multifamily-housing investment, according to a new report by Ten-X (formerly Auction.com). With strong job...
Read More
Apartment Affordability by Percentage of Rent-to-Income
During 2020, U.S renter households in professionally managed properties spent on average 27% of their income on rent. Understandably, there is...
Read More
The Transformation of Parking
Multiple factors are converging to disrupt everything we know about parking: Its physical structure, format, design, cost and, perhaps most important,...
Read More
Cities with the Largest Rent Swings in September
In September, Miami and Bakersfield, California, share the top spot for highest jump in rents. Each city experienced a 9 percent increase compared...
Read More
Two-Bedrooms More Affordable Than One-Bedrooms in Certain Markets
Demand for one-bedrooms during the pandemic have skyrocketed, resulting in unfilled two-bedroom apartments at lower rates.While it may defy logic,...
Read More