Strong apartment demand continued to be powered by job growth, demographic trends, and economic shifts. According to RealPage, occupancy during the third quarter climbed to 96.3 percent, almost reaching the all-time high of 96.4 in late 2000. Occupancy increased by at least 100 basis points in the past year in Greensboro, Cincinnati, St. Louis and Virginia Beach.

Effective rental rates rose to $1,416, a three percent increase year-over-year as a result of tight occupancy. Secondary markets led the nation in rent growth, specifically in the Southeast region. Phoenix and Las Vegas remained anchored as leaders in rent growth followed by Greensboro, Raleigh, and Nashville. 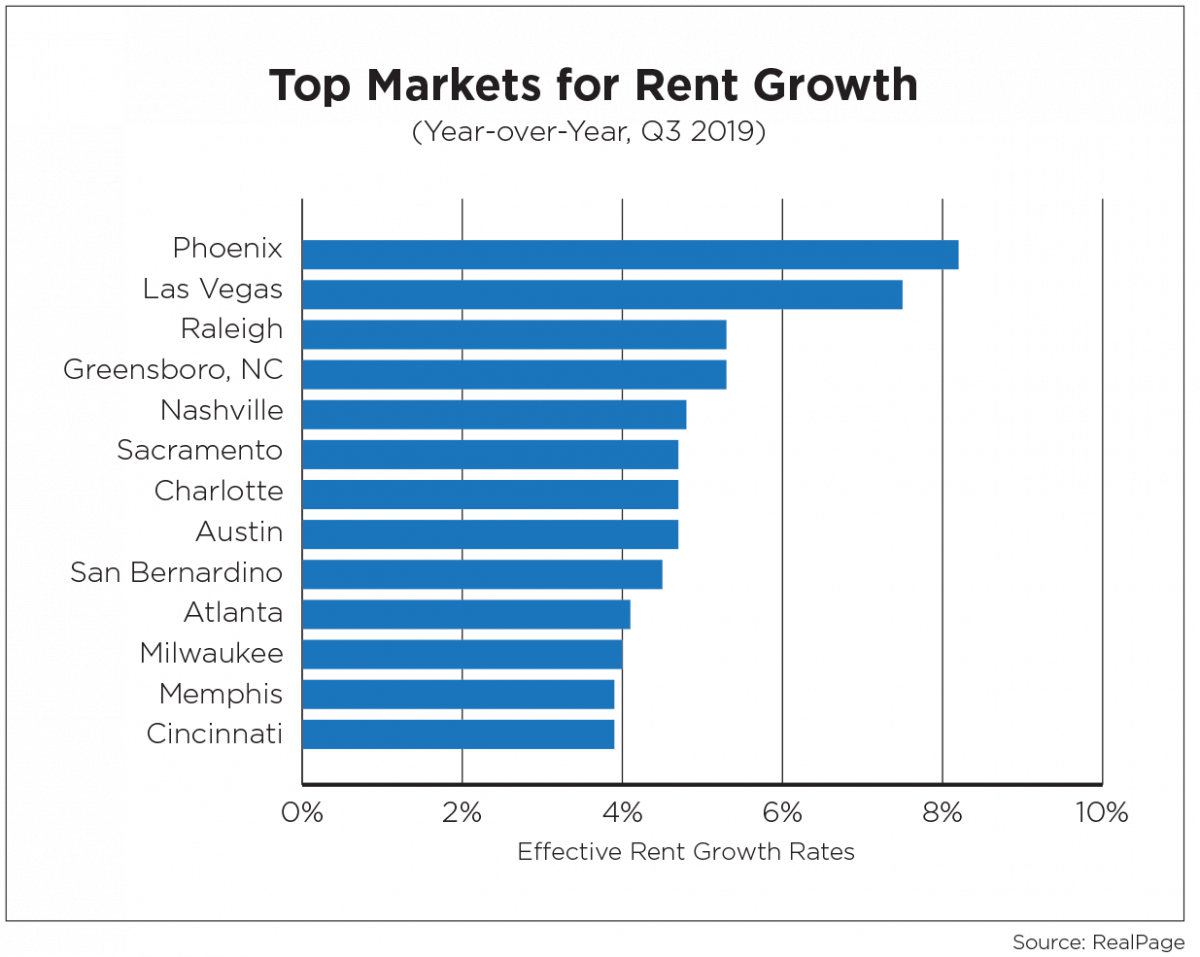 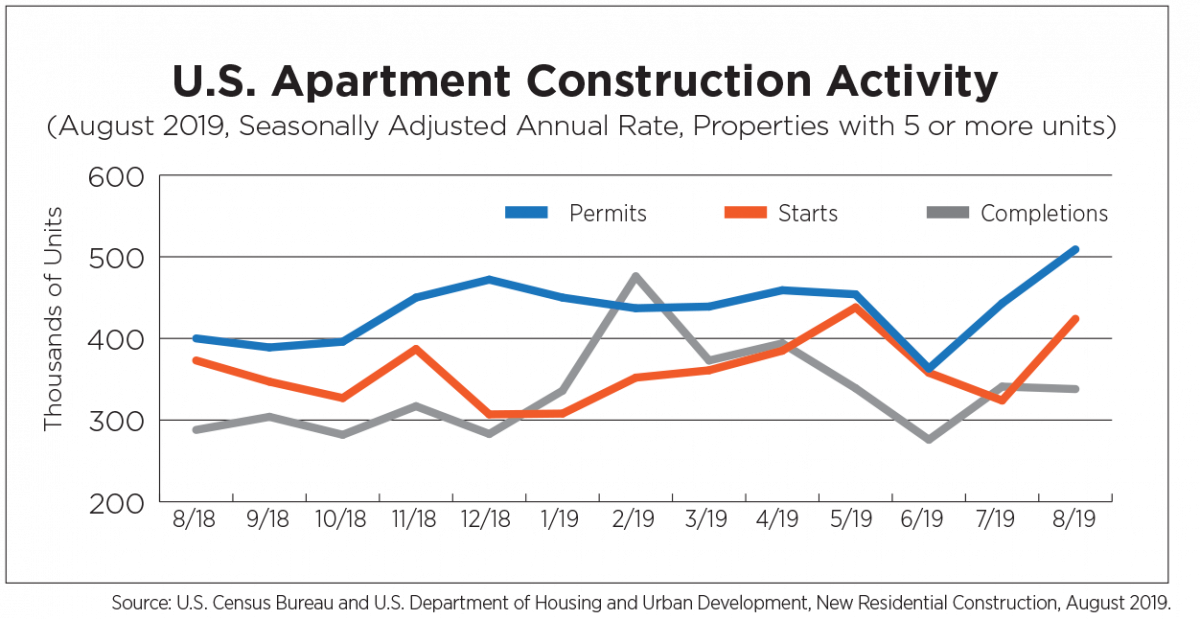 Apartment deal activity was mediocre during the third quarter, indicating anxiety amongst investors. The decline in sales has no relation to demand but rather speculation about an imminent recession. Closed apartment transactions totaled nearly $42.3 billion this quarter, as reported by Real Capital Analytics, a downturn of 8.6 percent year-over-year. Owners and Investors exchanged 280,557 units, declining by 8.7 percent. Average price per unit was $175,255 a 6.3 percent increase from Q2 2018. The average cap rate was 5.5 percent, down by 4 basis points. Individual assets were the preferred deals among investors increasing by 1.8 percent. Portfolio sales volume declined significantly by 39.3 percent. 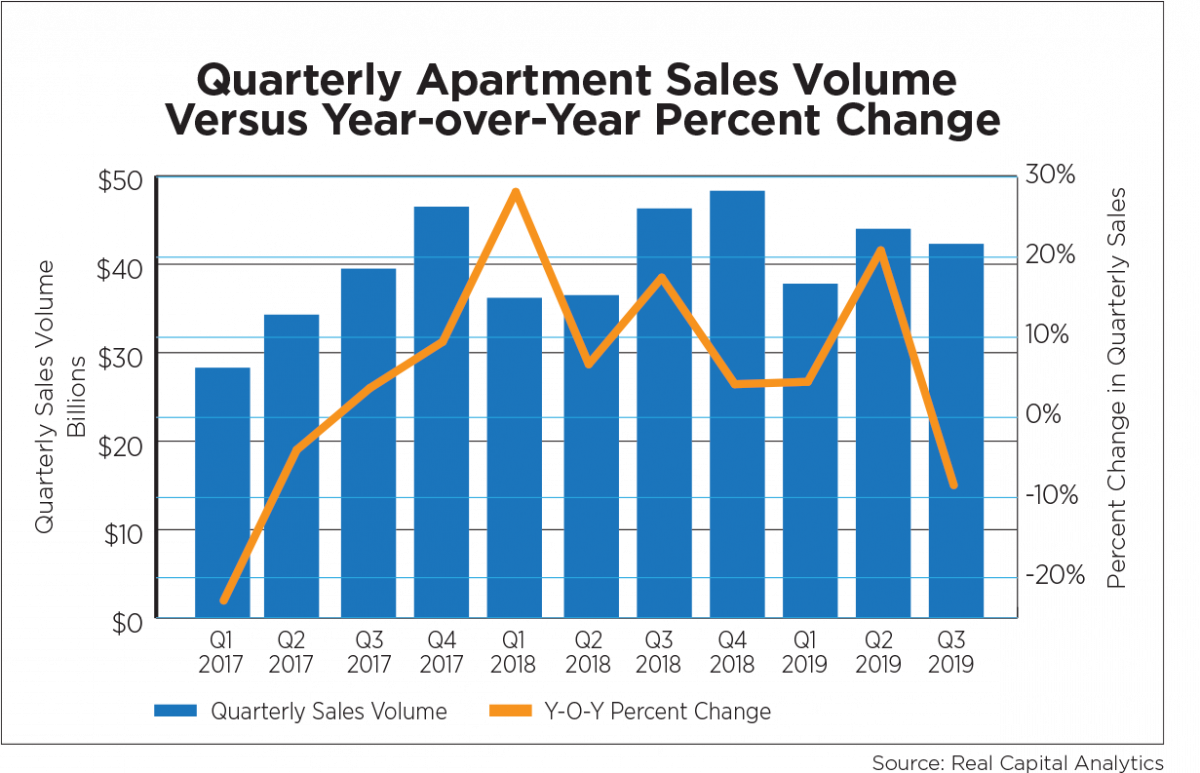 The October economic outlook from the National Association for Business Economics revealed more pessimism than the June survey. Not only were 2019 GDP forecasts revised downwards to 2.2 percent from 2.4 percent, but the 2020 forecast slipped to 1.8 percent, which would be the lowest rate of growth since 2016. Four out of five forecasters weighted risks to the downside with trade policy as the key culprit. The question of an upcoming recession tempered the pessimism with survey respondents rating the odds of a recession over the next 12 months as relatively low but picking up in late 2020. Respondents put the odds of a recession starting by the end of 2020 at 47 percent and increasing to 69 percent by mid-2021.

Strengths in the economy were once again demonstrated through labor market indicators as the unemployment rate reached a new 50-year low of 3.5 percent. Job gains moderated to 136,000 in September, but upward revisions to July and August figures kept the third quarter average at a fairly healthy 157,000 new jobs per month.

Detroit was the only metro area that experienced job losses on a year-over-year basis while 50 other major metros posted gains. Southern and Western cities have dominated over the past year with Orlando growing by 4 percent and Dallas and Seattle each topping 3 percent. A longer-term view of the job market, comparing 10-year and 5-year growth rates, shows labor market momentum picking up in Memphis, Philadelphia and St. Louis. Metro areas experiencing slowing job growth in the past 5 years included Houston, New Orleans and Oklahoma City. 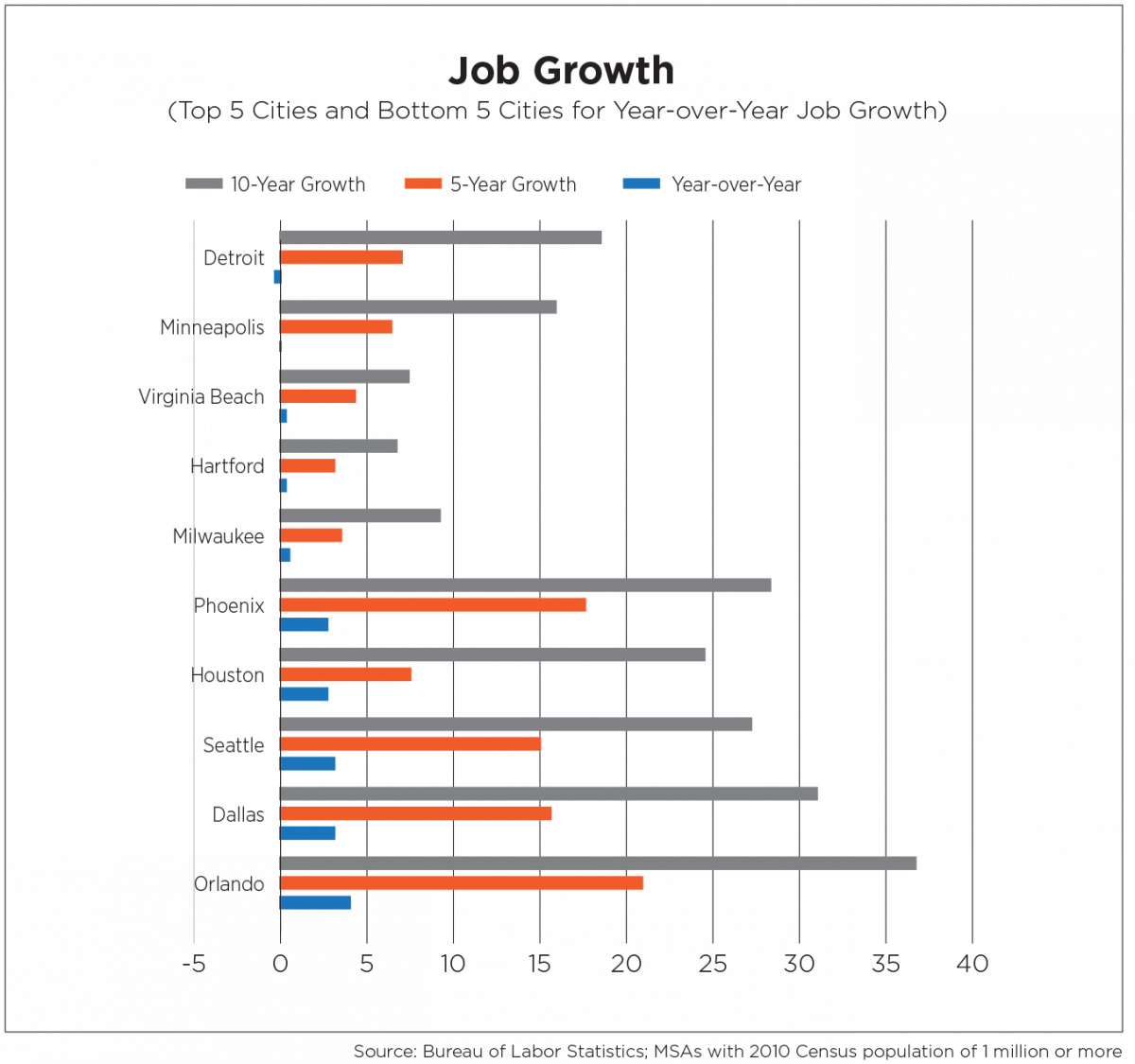 Recently released data from the Census Bureau points to continued strength in the rental housing market. According to American Community Survey 1-year estimates, the number of renter households in apartment properties grew by 690,000 in 2018 after a year of contraction in 2017. The strongest household growth occurred in properties containing 50 or more units. It’s worth noting that different Census surveys can produce a wide variance in results, but the Housing Vacancy Survey also backs up a growing number of rental households of all types in 2018 and into 2019.

In addition to household estimates, Census also released median household incomes, which measure all sources of income within a single household. National figures remained essentially flat in 2018. Income growth in renter-occupied housing, however, swelled by 6.1 percent, coming off lackluster growth of just one percent in 2017.

Strong demographic and economic fundamentals on the demand side coupled with interest rates that are trending lower on the capital markets side paint a steady growth outlook for the apartment industry in 2020.