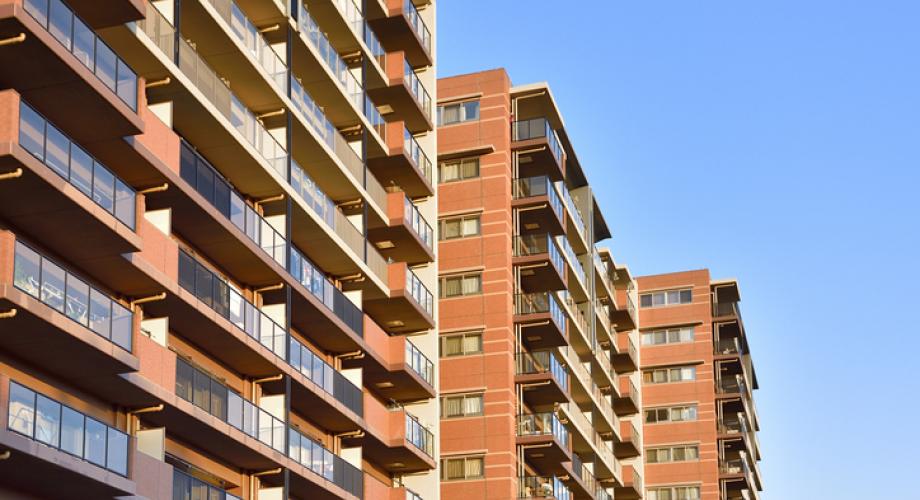 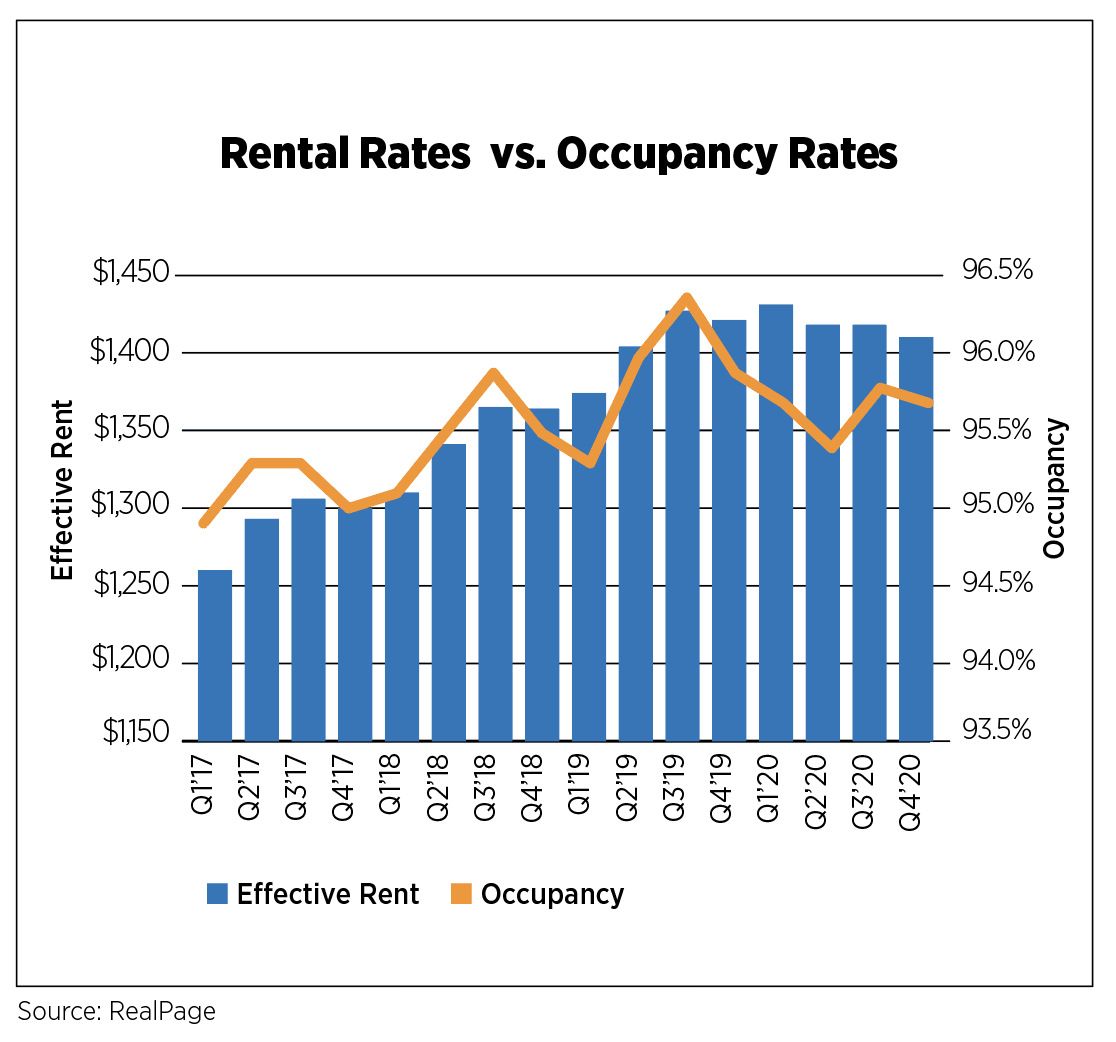 After exhibiting signs of revitalization during Q3, the apartment market ended 2020 with a mixed performance. Both occupancy and rents descended, yet absorption stood closer to pre-pandemic levels. Difficulties from the coronavirus pandemic and typical seasonality challenged market fundamentals. As reported by RealPage, U.S. occupancy dropped slightly by 0.2 percentage points year-over-year to 95.6%, although returning to the same rate as Q1 2020. Occupancy declines varied also from market to market. According to REIS, Lexington, Albuquerque, New Haven, Dayton and Wichita were among the strongest markets for occupancy growth year-over-year. Meanwhile, Washington, D.C, Louisville, Fort Lauderdale, Fairfield County (Conn.) and Raleigh saw the highest increases in vacancy.

Rental rates further declined as properties competed against each other for the shrinking pool of renters. Effective and asking rents averaged $1,383 and $1,453, respectively, both falling 1.4% since Q4 2019. Comparing 2020 to 2019, rent growth fell by an astonishing 3.1%. The robust drive toward smaller markets persisted given that many renters have chosen to migrate away from major markets. According to REIS, Lexington, Memphis, Chattanooga, Las Vegas and Sacramento ranked highest for rent growth. Major East and West Coast markets such as San Francisco, New York City, San Jose, Washington, D.C. and Oakland continued their downward trends for rent growth. However, there is optimism that the rollout of the vaccine and subsequent economic boost will restore multifamily demand for some gateway markets. RealPage projects that rental rates will likely return to pre-pandemic levels by the end of 2021, and then begin to increase by the end of 2022.

Apartment demand delivered a remarkably solid performance during the fourth quarter given the challenges of 2020. The fourth quarter brought total annual absorption to 344,380 move-ins, higher than the 2019 quarterly average of 279,494 move-ins. RealPage reports that Dallas, Atlanta, Houston, Phoenix, Denver and Charlotte led the nation for apartment demand during 2020. New construction totaled 296,115 annual units, below the 2019 quarterly average of 325,801 units. Since many delayed projects from 2020 are near completion, more than 403,600 units are expected to come online during 2021. 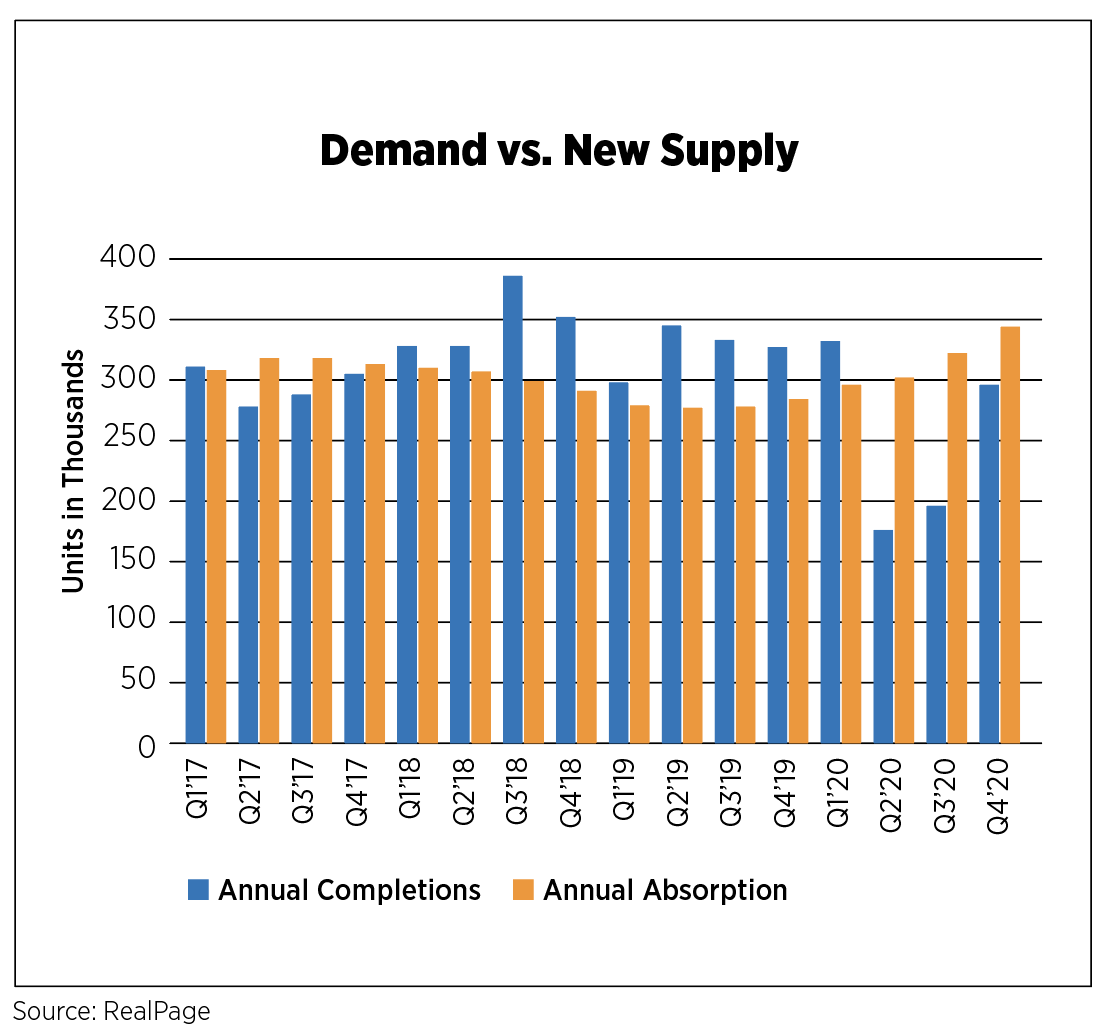 Multifamily investments rallied at the end of the year. According to Real Capital Analytics, 6,945 properties totaling 325,345 units sold during the quarter for $55.4 billion. This was a considerable improvement in activity from the previous quarter. However, the fourth quarter still revealed a decline of 27.1% in investment sales activity compared to Q4 2019. The average price per unit increased to $188,477, up by 2.6%. The average cap rate was 5%, down by 113 basis points. Garden-style asset sales totaled $36.2 billion during Q4 2020, while mid-/high-rise properties totaled $19.2 billion. Dallas, New York City, Los Angeles, Atlanta and Phoenix were the leading markets for deal activity during 2020. Radco Companies pulled off the biggest deal of the fourth quarter. The real estate developers sold four properties to Sunstone Properties Trust, Phoenix Realty Group, Bridge Investment Group and TruAmerica Multifamily totaling 1,656 units for a combined $242.8 million. The properties that were traded are garden-style assets located throughout Florida markets.  U.S. Economy 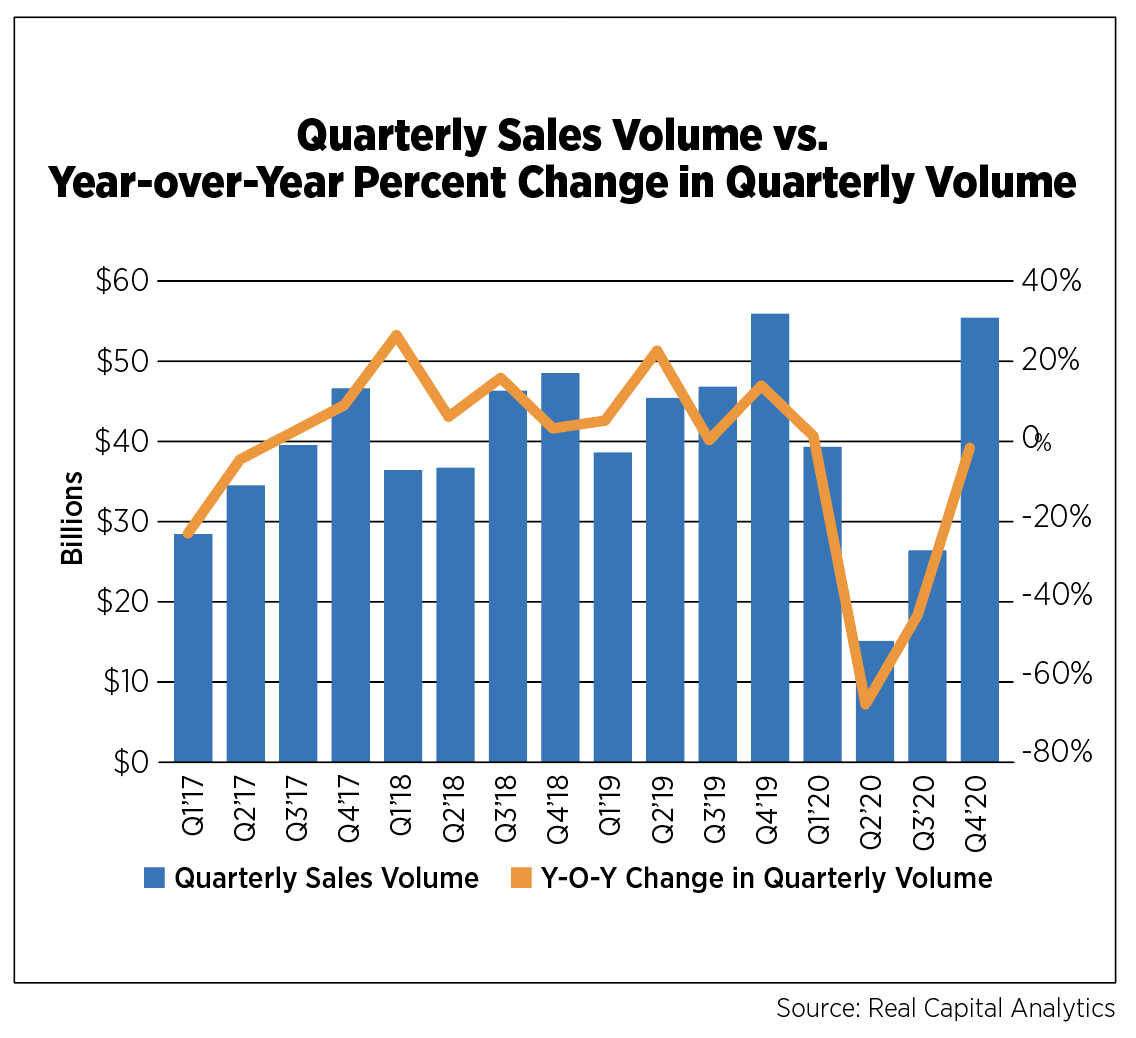 Although GDP rebounded nicely in the fourth quarter, the labor market continued to struggle. After job declines numbering 227,000 in December, just 49,000 jobs were added in January. That leaves 10 million jobs lost to the pandemic, half of which are expected to be permanent, according to Moody’s Analytics. The retail trade and leisure/hospitality industries have been disproportionately impacted during the pandemic. During the past three months (November-January) leisure/hospitality has shrunk by 587,000 positions as total non-farm payroll employment across the U.S. increased by 86,000. The unemployment rate in January dropped to 6.3% due both to the job additions as well as a decline in the number of people in the labor force.

Weekly filings for unemployment also showed no signs of a turn-around, with initial claims consistently above the highest pre-pandemic levels. As of mid-January, approximately 17.8 million people were filing for some sort of unemployment benefit compared to only 2.1 million a year prior. 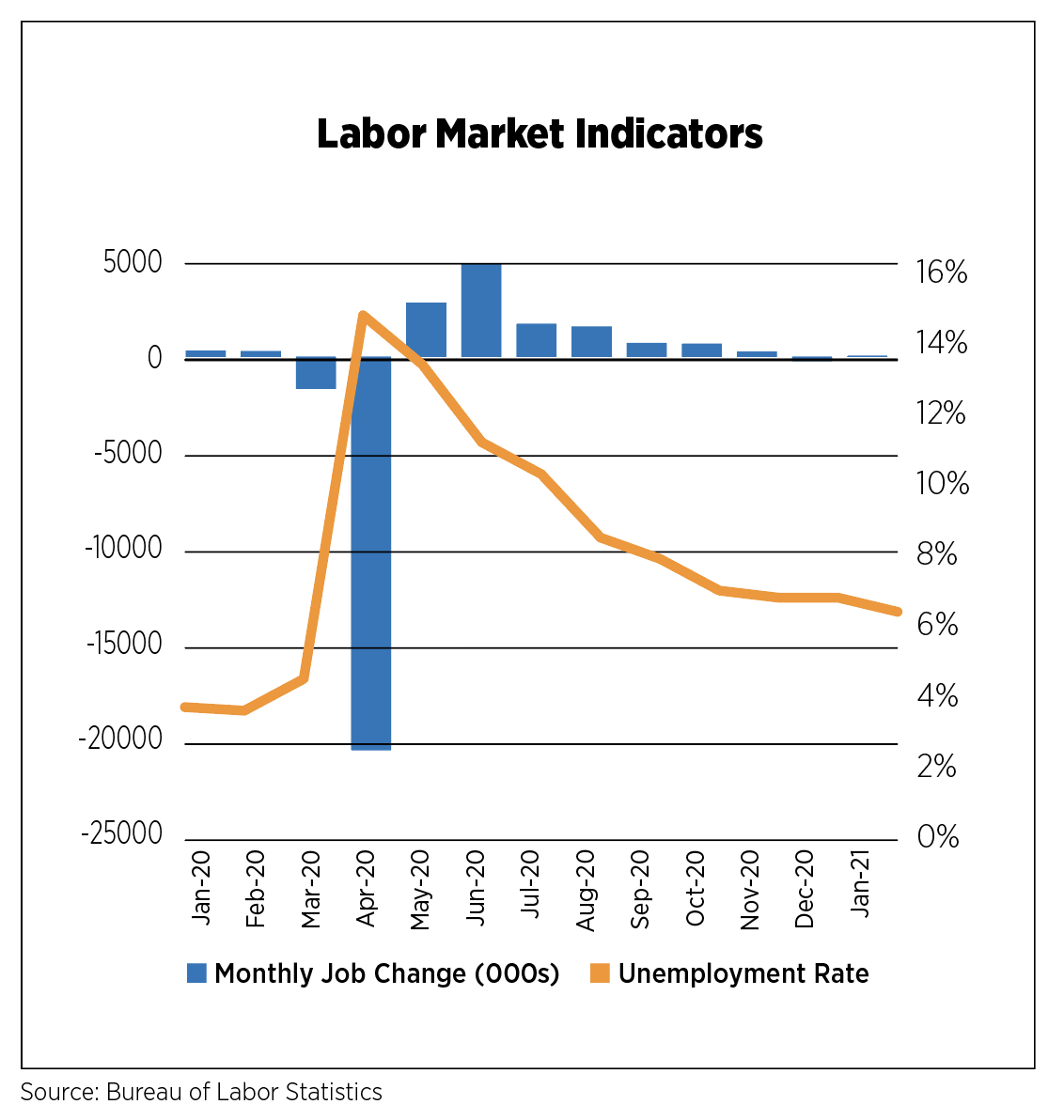 The good news heading into February was that COVID-19 cases and hospitalizations were down, while the bad news came by way of new variants spreading, some of which may be vaccine-resistant. As with many indicators throughout the pandemic, there is a wide range of variance among sectors and geographies. The Moody’s/CNN Business Back to Normal Index tracks 12 high frequency data series plus monthly employment figures, using February 29, 2020 as the baseline for “normal.” At the national level, the daily index ranged between 81 and 82 for nearly a month as overall activity died down after the holidays and inclement weather kept many indoors. The discrepancies and activity were evident in state-level data, with Florida operating at nearly 92% of normal levels while New York lagged at 70%. It is important to note that while uncontrollable factors such as weather affected the Index, so too did various levels of state and local restrictions, vaccine distribution, COVID-19 cases and basic demographics. 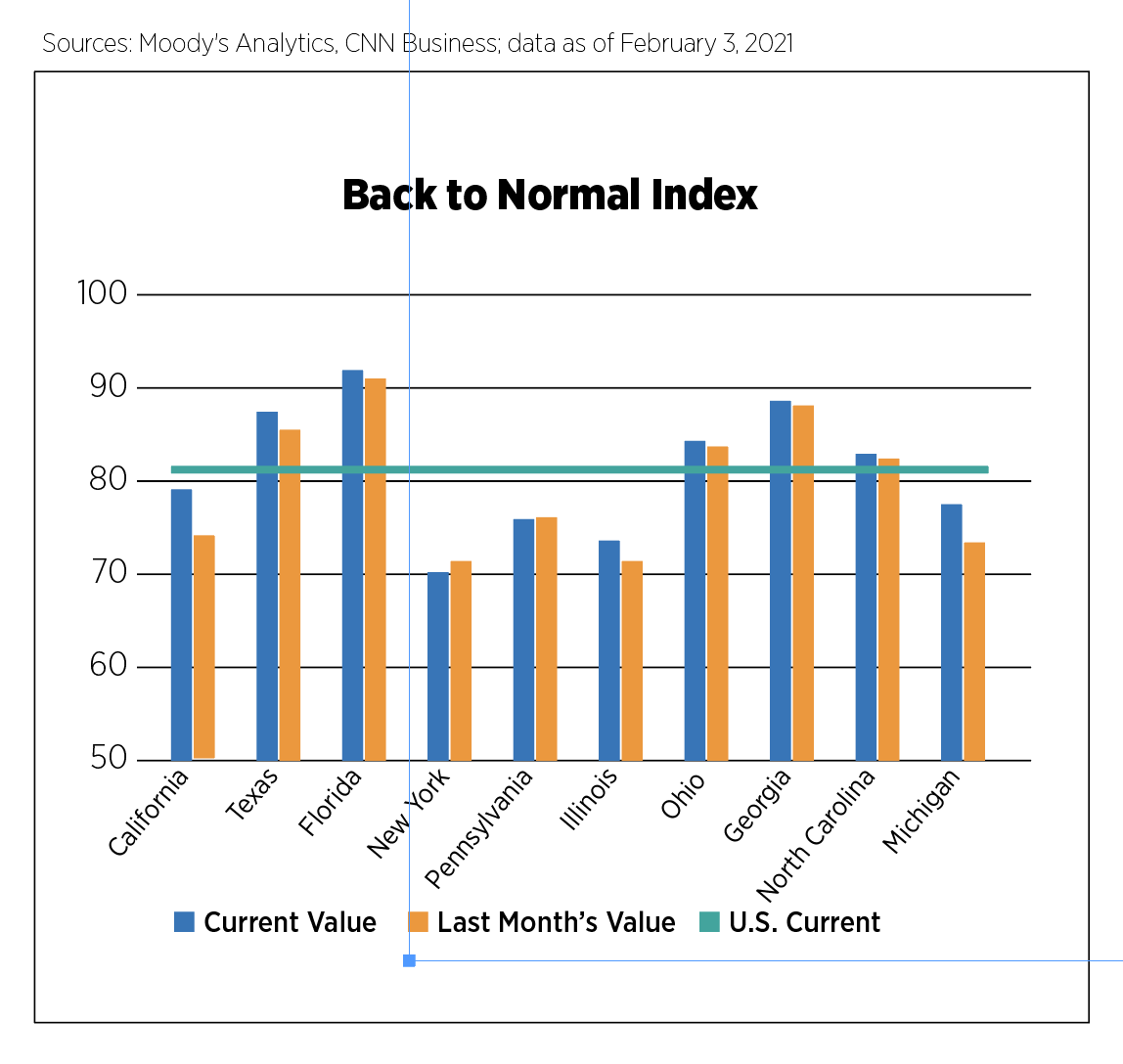 The vaccine rollout, despite its many limitations, along with the $900 billion stimulus package passed at the end of 2020 brought optimism to business leaders, economists and analysts. Many organizations, including the Board of Governors of the Federal Reserve System, lifted their GDP forecasts and lowered their unemployment rate forecasts for 2021 and 2022. There seems to be little doubt, however, that the first quarter of this year—perhaps extending into the first half—will be challenging as the virus remains largely uncontrolled.

The rental housing industry also remains bifurcated with many of the market indicators discussed in this report mainly reflective of larger, institutional-grade, professionally managed properties that overshadow the plight of small, independent owners. Without more assistance from government and other entities to help cover rent shortfalls amid eviction moratoria, these owners could be forced out of business. And should the economic recovery slip, these impacts could easily bubble over into larger segments of the market.

Paula Munger, Assistant Vice President of Industry Research and Analysis and Leah Cuffy, Research Analyst are both from NAA.