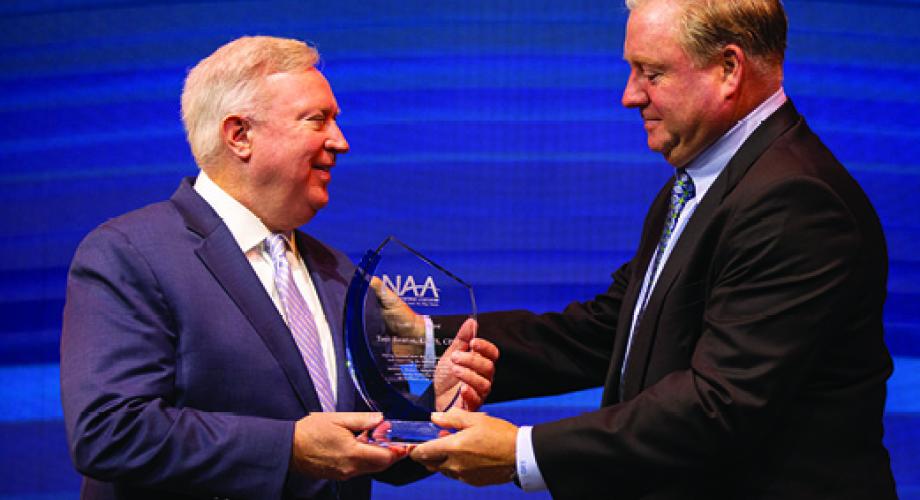 Tom Beaton, the 21st inductee into the NAA Hall of Fame, accepts the honor from Deane Dolben at Apartmentalize in Chicago.

The National Apartment Association (NAA) is thrilled to announce the induction of Tom Beaton, CAPS, CPM, Senior Vice President, Management for The Dolben Company, into its Hall of Fame, the highest honor that can be bestowed upon a rental housing professional.

“It has been my pleasure to work side by side with Tom all these years at Dolben and to watch his contributions to the continued success and growth of the NAA,” said Dolben. “Here at NAA, Tom has led not only with hard work and new ideas for how to make the association better, but by coaching and inspiring others to do the same. I am sure that those of you who have worked on a committee or on a leadership team with Tom, will join me in celebrating his receiving this well-deserved recognition.”

Beaton, who has been with The Dolben Company since 1982, is responsible for overseeing the operations of the management portfolio, which consists of more than 17,000 units in New England and the Mid-Atlantic regions. In addition to his years of service to NAA, Beaton is also a Director and Past President of the Massachusetts Apartment Association (MAA) of the Greater Boston Real Estate Board, and a Director of the Greater Boston Real Estate Board.

“I have been asked many times what it is about this industry that keeps me motivated,” said Beaton. “First, every day is different. But most importantly, we are challenged every day to provide a very high level of service and innovation to the benefit of the owners that we represent and the residents that reside in our communities. A person’s home is one of the most sacred aspects of their life. In this industry, we have the opportunity to provide a person a warm and welcoming living environment that they are proud to call home. That responsibility has kept me engaged and motivated throughout all of these years.”