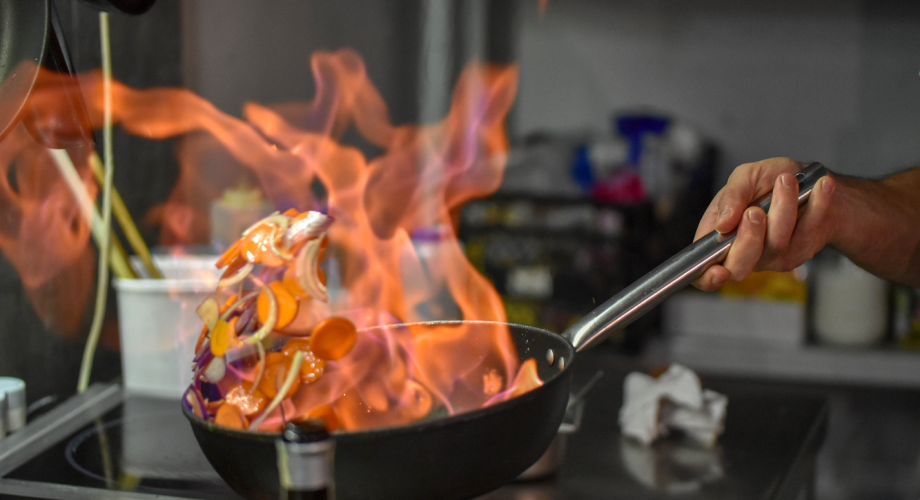 Cooking fires are the number one cause of home fires, according to the Federal Emergency Management Agency (FEMA) and the National Fire Protection Association (NFPA), and they have been for decades.

Although the electric coil burner was introduced at the Chicago World’s Fair in 1893, it only became popular in the 1930s due to heavy promotion by the electric utility companies as a means of encouraging increased electricity usage. Being reasonably priced and superior to wood-burning stoves in ease of use, it went on to become a global standard.

Due to its popularity in public, affordable and multifamily housing, and the high temperatures these old-style coil burners can achieve, the majority of today’s cooking fires originate on electric coil burner-type ranges. Most commonly, cooking fires occur when cooking or frying with oil combines with inattentiveness.

Cooking oils are excellent combustion sources because of the high temperatures these old burners can reach, relatively low auto-ignition points (700-750 degrees F) of the oils and the amount of fuel present – think deep-fat frying. Once ignited, they can be sudden, explosive and extremely dangerous.

For decades, fire professionals and safety organizations have repeatedly emphasized smoke alarms, fire extinguishers, fire sprinklers and the perennially sound advice to not leave the kitchen when cooking, especially when using oils.

In accidental cooking fires, mitigation is an attempt to reduce, limit or contain an active fire or pan contents that are nearing the auto-ignition stage of heating, i.e., when small flecks of flames are combining with smoke from the pan.

However, if no one properly responds to the alarm, or even if the dispersant initially reduces the flames, the heat source remains active, and re-ignition can quickly follow.

Fire sprinklers, contrary to conventional wisdom, aren’t activated by smoke alone. They require hot gases and super-heated air of about 160 degrees F at the glycerin-filled bulb on the ceiling to activate. That means high heat and smoke, and very likely flames are already present.

However, if even a single fire sprinkler is activated in a multi-floor residence, water can spread from upper floors to damage apartments, rooms and hallways on multiple levels below. And the water keeps flowing until a fire professional finally arrives onsite to turn the water off.

Another option in the mitigation category is smoke-alarm-sense, stove shut-off technology. The assumption is that there is always smoke before fire, so if the device detects smoke, it can shut off the stove before the fire starts.

The weaknesses of this approach are threefold:

Smoke itself is notoriously incapacitating. Heavy smoke inhalation can cause disorientation, unconsciousness and death.

Cooking fire prevention technology now includes temperature-limiting burners. These burners are designed to stay below the auto-ignition point of oils or grease.

Temperature-limiting burner elements, while not completely new, are now more common because of a recent and little-known UL Standard in effect since April 2019: UL858 60A.

This standard covers many mundane aspects of how electric coil stoves are to be manufactured, including door hinges, vents, glass, knobs, wiring, etc. But a new Section 60A adds a clause that stipulates a specific cooking oil ignition test. The test requires that a half cup of cooking oil must not auto-ignite in a cast iron pan within 30 minutes of the burner being turned to the high setting.

Current products conforming to UL858 60A are integrated into all new electric coil-element range stove models, and stand-alone replacement burners are available from some manufacturers.

Temperature-limit surface-burner technology has evolved over three generations of design:

The first-generation temperature-limiting product was a cast-iron electric-burner kit developed in 2006. The first-generation fire pre-prevention cast iron burners was designed to limit the upper-end temperature of the burner to not exceed 700 degrees F. Installation included mounting a printed circuit card with wiring and attaching a cast iron plate to the existing burners with brackets. Professional installation was required.

This cast iron product was ground-breaking and limited the possibility of cooking fires long before the UL858 Standard was amended. There was nothing like it at the time.

The upside to this product was it helped prevent cooking fires. The downsides were cost, the need for a professional installer and over time, degradation of the components during normal use. Also, the density of the cast-iron plate slowed the heat-up and cool-down process resulting in an unsatisfactory cooking experience.

Second generation temperature-limiting products conforming to UL858 60A include offerings from major OEM after 2019.

The specific UL858 60A rating is achieved as a combined product with individual components such as burners are not considered certified on their own. In other words, installing a burner onto another model stove does not render the certification to that stove.

The second generation cast-iron product was the first “stand-alone” UL858 60A burner to be certified, available in a “plug-in” format.

The upside of the second generation of products is, again, the achievement of significant cooking fire prevention. However, like the first generation, second generation coil-based products lack heat retention when cycling and cause excessive time delays in returning to cooking temperatures, which can stop the cooking process altogether. For example, water can take over 30 minutes to boil with OEM UL858-60A-compliant burners.

Cast-iron disc burner products still suffer from a failure to quickly heat up and are slow to cool down. This is due to the density of the cast-iron cooking surface. It also contributes to lack of ability to achieve proper temperatures sufficient for deep-fat frying and foods may not be cooked thoroughly—another drawback.

Potentially significant issue arises in multifamily housing when limited cooking performance hinders acceptance. When residents are disappointed with the lack of a satisfactory cooking experience, they might remove or replace the unsatisfactory solution with non-UL858 60A burners. Ultimately, this defeats the unattended cooking fire solution.

Their products are also Nationally Recognized Testing Laboratory (NRTL) evaluated to conserve energy similar to the lowest Energy Star ratings – an important consideration in the present climate of increasing energy prices. This provides an ROI to multifamily housing.

While it is expected that eventually the home cooking appliance industry in general will move toward a more satisfactory user-experience with temperature cooking limit elements, the good news is that prevention technology in any of the above products is vastly more effective than a mitigation-only strategy.