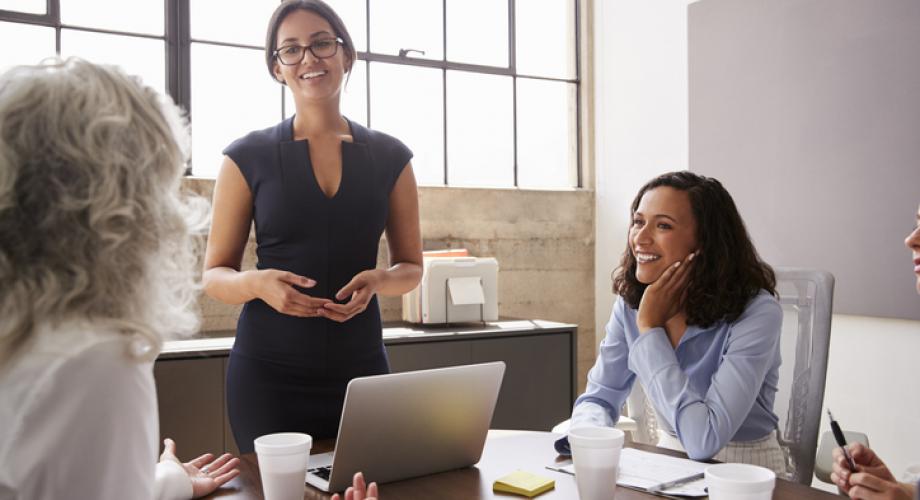 Showcasing business and financial acumen, being strong, and using their strengths is helping women overcome leadership barriers and gender bias.

Recognizing this disparity, many women are taking matters into their own hands and overcoming leadership barriers and bias. And they’re doing it with standards and utilizing their strengths well, according to the panelists on the Sister’s Doing it for Themselves: Overcoming Leadership Barriers and Bias session at Apartmentalize 2019.

“We all have unconscious bias about ourselves and others,” said Lori Snider, Head of Learning & Experience at RedPeak. “But it’s time we change that. Strong women don’t have attitudes, they have standards.”

Part of changing that unconscious bias is utilizing the many strengths that women bring to the workplace.

“We understand that we have strengths, as women,” Snider said. “We typically turn those to weaknesses, but we need to turn them back to strengths.”

The ability to communicate effectively is one strength that can become a weakness in the workplace if not managed properly. Using qualifiers such as “sorry” or “just” and talking people out of a compliment is one of the biggest mistakes.

“We have a hard time accepting compliments, and we tend to say, ‘Oh it was a team effort,’ ” Snider said. “Do not be afraid to toot your own horn. It’s really important to claim your own achievements.”

It’s also important for women to say no to certain requests rather than agreeing to every task or assignment offered to them.

“People-pleasers who have a hard time saying, ‘No,’ ask yourself, ‘Am I letting guilt be my guide?’ Snider said.

Saying no is part of setting boundaries in the workplace, which is critical to managing time well and delivering the highest quality work possible.

“When thinking of setting boundaries—it’s about having conversations and asking questions with people,” said Lynette Brockman, CEO of Career Options—Recruiting Solutions. “This can help to prevent things escalating to something that never should have happened.”

Non-verbal communication, such as where you sit at the meeting table, can also inhibit growth in the workplace.

Another strength that women bring to the workplace that can become a weakness, according to the panel, is relationship-building. But leveraging the relationships is where some women struggle, according to Nancy Goldsmith, Managing Director of Property Operations, Bozzuto Management Company.

“Why do we not do this?” asked Snider. “Why do we tend not to leverage our relationships. We don’t want to take advantage and not to expect too much from another person. That’s what we were taught when we were younger.”

But it is possible to break free from this reluctance by having the conversation upfront when a favor is asked of you. “When you do ask a favor of someone, it’s important to let them know it runs both ways and you are available,” Brockman said.

Women also have strong financial and business acumen that they can bring to the workplace. These strengths have to be showcased regularly.

“If you’re wanting to grow and you go in the room and you don’t know business knowledge, strategic ability and financial acumen you won’t grow,” Brockman said. “Are you bringing along strategic thinkers as a team?”

Showcasing business and financial acumen, being strong, and using their many strengths, many women are overcoming leadership barriers and gender bias in the rental housing industry. Next up, eliminating it altogether.

Lindsey Bernhardt is an Account Manager for LinnellTaylor Marketing.