Skip to main content
Lessons for the Future: Student Housing That Makes the Grade
Image 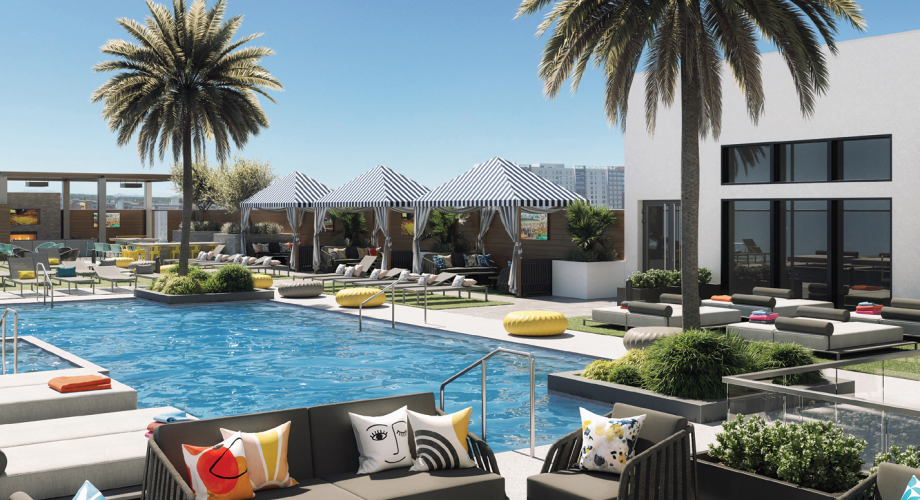 The student housing sector adapts to pandemic-related challenges and prepares for the fall semester.

Since the pandemic started disrupting life on college and university campuses more than a year ago, developers, property managers and design professionals working on purpose-built student housing have made changes, following an institution’s guidelines, the U.S. Centers for Disease Control and Prevention (CDC) protocol and government rules.

Many plans frequently changed as health officials learned more about how the virus is transmitted. Those involved in this rental housing segment know they may make more changes as students return for the fall semester and new variants possibly emerge.

The good news is that many of these off-site buildings, typically at large, Tier 1 universities, were constructed in the last decade and reflect best building practices, says Jack Boarman, AIA, Managing Partner and Founder of D.C.-based BKV Group, which has been in the student sector since 2004.

One of the prime goals of industry participants is to build in flexibility so spaces can adapt to changing conditions. But it takes an average of 12 to 18 months from when shovels go in the ground to the time doors open, and needs may change, says Scott Orphan, Senior Vice President of Houston-based Asset Living, which manages 130,000 beds in 40 states.

Complicating the situation is that many expect this won’t be the last pandemic, so new challenges may arise, says architect John Kirk, AIA, partner at New York City-based Cooper Robertson, which has worked on master plans for universities such as the George Washington University and the University of Delaware.

In the meantime, one lesson seems universal: Students returning to campus are willing to take online classes, if necessary, but unwilling to forgo enjoying other parts of campus life. “They don’t plan to hide away in their rooms,” says Commercial Interior Designer Mary Cook, whose eponymous Chicago firm has helped builder Toll Brothers Campus Living, which now has 4,431 beds in five states.

In some markets, Providence, R.I.-based Gilbane Development saw spikes in housing demand for the spring semester, largely attributable to students who had stayed home in the fall but eagerly returned to their friends and college community, says Karissa Schminky, Director of Leasing for the company, which has 16,000 beds in 13 states.

Frederick W. Pierce IV, President and Chief Executive Officer of San Diego-based Pierce Education Properties LP, which has 11,000 beds in nine states, agrees. “The no-show rate was only one-half of one percent, which represented the low end of the normal rate,” he says. “The clear takeaway was that students wanted to be at school and not at home, regardless of how classes were conducted. We predict enrollment growth for strong universities will be the largest in a decade.”

Even before students moved-in prior to the pandemic, the leasing process had changed. “Going virtual has been the trend since this demographic is so used to doing things online,” says Beth Pinder, Chief Operating Officer of Austin-based Campus Advantage, which develops, owns and manages 27,492 beds in 24 states.

Pierce expects to see a return to the pre-pandemic hybrid of personal tours with online signings. “It’s still a place to live,” he says. “The majority of our residents want to see it in person.”

To maintain social distancing among the large numbers arriving on campus, move-in day was extended over several days rather than a single day by some companies with larger assets, says Pinder. An additional protocol included parents and students checking-in from their vehicle and moving in a single direction once on their floor, Schminky says. Orphan’s firm found that using QR codes with “touchless” move-ins during the pandemic helped reduce staff needs. Overall, Pierce’s managers found that the new protocols made last year’s move-in the most efficient the company has ever experienced.

Because much of the purpose-built housing is relatively new, only minimal changes were needed at some buildings when it came to their mechanical systems and windows to improve indoor air quality and stop the virus from wide transmission. In many cases, Boarman’s clients easily upgraded their HVAC systems, reprogrammed units to circulate more fresh air or changed filters and heat coils.

Vertically integrated, Philadelphia-based Campus Apartments, which has a new, large national student housing portfolio and has new development projects underway at any given time, worked with national health experts and large HVAC companies to incorporate air-purifying equipment in its common areas. The bipolar ionization equipment was installed in the return air flow systems.

Managers took other steps as information about the virus was learned. Some replaced hand dryers with paper towels in bathrooms; installed touchless and voice-activated devices for doors, faucets, water coolers and elevators or removable grips that could be changed regularly, says Cook.

Managers at that company and others also set out personal protective equipment, hand sanitizers and masks. “We put products all over our buildings as we learned more about how the virus spreads,” Pierce says.

While they may not like to use the word “patrol,” many managers and staff checked more often that residents followed pandemic protocols such as not bringing in non-resident friends. Orphan’s firm handled checks differently at different properties. At some, it initially opened amenities only during office hours, then added weekend hours. “We wanted to be a constant set of eyes walking through,” he says.

To minimize its staff’s exposure, Pinder’s company employed “A” and “B” teams, so half the staff worked from home for two weeks and alternated with the other half at work.

Many purpose-built student buildings shifted years ago to “pods” or apartments with bed/bath parity and a shared living space and kitchen, which minimizes numbers together. “Many students have no plans to give up living in a ‘four-pack’ with those they’ll do most of their socializing with,” Cook says.

At a time when economics was more of a concern for many families, the multi-bed apartment model with four to six students offers an affordable option, Pierce says.

Overall, it proved safe. Pierce’s residents reported only 30 positive COVID-19 tests. One factor, which he thinks helped, is that his buildings are designed in a low-density, three-story, garden-style layout.

Managers used a mix of strategies to keep amenity spaces free from the coronavirus, generally taking cues from local and national experts on when to close and re-open. “We kept in close touch with all managers and local health agencies and adjusted office hours and amenity hours and capacity as we needed to,” Orth says. Managers limited the number of users at a given time in amenity spaces and used their online systems to require registration and reservations to use all these spaces as well as required residents to wear masks at all times.

When possible—and down the road—Orth expects more developers and managers to modify common area design to create more individual spaces for studying. And some companies may add movable walls to adjust room size, which can be less costly than redesigning with permanent walls, says architect Theresa Genovese, AIA, LEED AP, Principal of New York City based-CetraRuddy.

Campus Apartments also focused on available internet bandwidth early on and other technology tools to ensure residents could study, Zoom and stream video content from apartments and common areas. “This was an early adjustment to accommodate the substantial increase in demand on these systems,” Orth says.

And as Joe Goodwin, Senior Vice President of Asset Living sees it, “It’s possible technology will become its own amenity. Everything from contactless entries to virtual classrooms—we’re seeing many opportunities for properties to differentiate themselves and stand out in the competitive student housing market,” he says.

Many searches sought information about options, from ground level to rooftop to apartment balconies. Orphan found greater resident interest in dog parks as the pandemic made having a pet more popular.

While Cook expects features like volleyball courts, hammock groves and big screens for outdoor movies to remain in vogue, she thinks those that are “hokey,” like lazy rivers that allow students to sit in an inner tube and float along a moving current, will decrease as choices are made due to limited space and dollars.

However, virtual events—outdoor and indoors—are expected to continue as needed, from trivia games to yoga, cooking classes and mock job interviews.

Focusing on sustainability and wellness.

Many refer to this generation as the “true” generation because it seeks authentic or “real” materials, Cook says. While they may not recognize the difference between wood and non-sustainable, wood-looking materials, they seek housing that reflects green certifications such as LEED and U.S. Green Building Council, as well as recycling programs, healthy air and water purification systems, more ways that bring in sunlight, conserve water, light and energy, and offer low-VOCs, Cook says. Developers and property managers consider residents’ total mental and physical well-being as they make choices. “Some know they need to work with other services on or near campus to provide for total wellness,” Genovese says.

Most property managers of purpose-built housing kept to their policy that required payment for a full calendar year or sometimes an academic year and with a parental guarantee. “There have been instances where a medical or other personal situation required accommodations by local managers such as finding replacements to take over their lease,” Orth says. “But most managers continued to fully enforce their leases despite some students going home and remaining there.”

How competitive is this niche?

Despite the pandemic, students staying at home and participating in virtual learning, the niche has grown more competitive. “Development continued during COVID-19 with about 32,000 off-campus beds delivered in August 2020. Many university enrollments continue to remain steady or increase, so there’s additional demand, especially at Tier 1 state schools and the complexes in good locations adjacent to campus,” says Scott Orphan of Asset Living.

Frederick W. Pierce IV of Pierce Education Properties has found the same trend. “It’s always been considered a recession-resistant asset class and now we know it’s pandemic resistant, too,” he says, “Our collections were 98% in academic year 2020-21.”

What’s most interesting, Pierce says, is that since he entered the industry 25 years ago, more institutional investors have recognized the asset as a way to allocate investments and diversify their portfolios. “There’s been much more crossover,” he says. Some of the competitiveness is also due to where the school is located. “Properties in urban sites are much more challenged for space,” says architect Theresa Genovese, AIA, LEED AP, Principal of CetraRuddy.

Do you need a COVID-19 passport?

The number of colleges and universities and student housing facilities that require a COVID-19 passport is still in its infancy but expected to grow. The University of Notre Dame wrote to its campus community that it will require all students—undergraduate, graduate and professional—returning to campus for the fall 2021 semester to be fully vaccinated against COVID-19. The university will accommodate documented medical or religious exemptions. American and Georgetown Universities, both in Washington, D.C., also stated they will require students to be vaccinated. But purpose-built, off-campus housing doesn’t need to comply with these mandates but instead follows Fair Housing Act laws. Student residents who want to use campus facilities may need to be vaccinated so this is something students, property managers and universities will determine.

Down the road, more buildings may incorporate wider corridors, floor-to-ceiling, operable windows and more outdoor space. Such changes may add costs, and developers and managers will decide if they raise rents, pare staff, forgo features or construct more efficiently. Architect Jack Boarman’s BKV firm is testing industrial modules that take less time and money to erect on a site. Scott Orphan of Asset Living doesn’t expect to see a rent decrease. “Unless a market is overdeveloped, I think we’ll continue to see an upward trend, which historically has been the case,” he says.