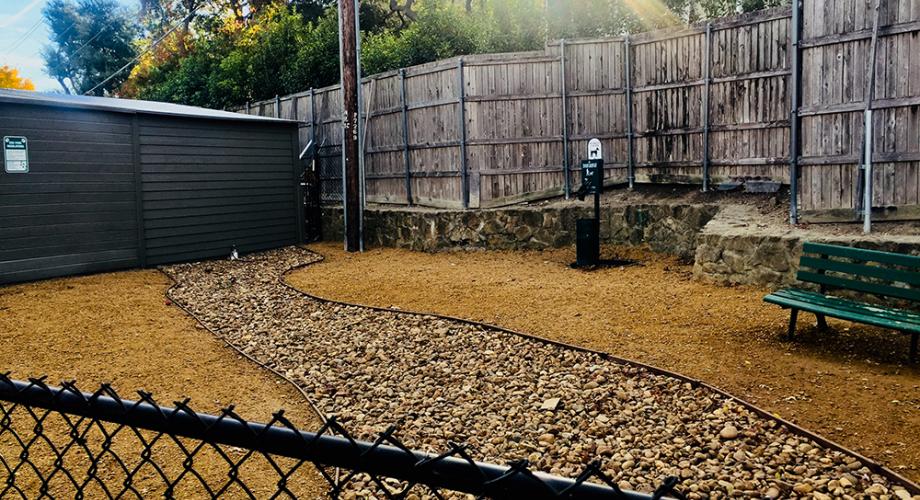 By changing the surface, apartment communities can create a more enjoyable environment for animals.

Pet-friendly communities continue to be a desirable amenity, as well as a treat to bring in new apartment residents and retain others.

Industry experts agree that a grassy park or designated area for dogs to stretch their legs, have a catch with their owner or do their business helps lease apartments and can command increased revenue.

Dog parks − often outfitted with cushy grass or synthetic turf, plants, trees and even doggie obstacle courses − are aimed at residents who are among the estimated 43.3 million dog-owning households in a hound-friendly revolution in the United States. Since 2007, the number of households owning dogs has risen by more than 300,000, according to the American Veterinary Medical Foundation.

And it’s no longer a lifestyle desired by those who own a backyard. A recent multifamily housing industry report says that 72 percent of apartment renters are interested in a place for their dog to mark its territory. Bathing stations and pet daycare are high on the list, too.

But most property managers and owners will tell you that dog parks require a little TLC, usually performed by the maintenance crew or landscape contractor. In addition to leaning on residents to pick up after their pets, onsite staff or landscape companies must keep the area clean by washing away what’s left behind and sprucing up beaten down areas where dogs romp and dig.

Otherwise, the area can look tattered and smell.

Now that dog parks have seemingly enjoyed a good romp in recent years to attract residents, some apartment operators are facing damage-control issues from the wear and tear of dogs and their unsavory habits. Chris Lee, President of Dallas/Fort Worth-based Earthworks, says dead grass and wilted plants are diminishing the overall look of properties, and replanting isn’t always a prudent solution.

The problem is exacerbated on smaller, mid-rise urban and suburban communities where the grass is at a premium. Wear and tear is painfully obvious when even the smallest area of grass stands out amid the concrete and steel that consume most of a city block.

Synthetic turf has made maintenance easier but not immune to the pitfalls of dogs being dogs. And for every dig or hike and squat on the surface, tree or plant, the area takes a hit. Urine is as agitating to a doggie-designated area as a full moon to a baying hound.

“It used to be an uptown problem, now it’s everywhere with more mid-rises popping up on smaller pieces of land,” says Lee, whose company is working with properties to spruce up pet areas. “We’ve tried everything including over irrigating, and there’s not a lot you can do about the smell. With synthetic turfs, the problem is the smell. On a hot summer day, it will make your eyes water.”

Earthworks has taken a page out of drought landscaping to preserve community appearances while dogs do their thing. The company has reworked damaged pet areas with the xeriscaping technique of using rock and decomposed granite instead of grass and turf.

The concept is perfect for communities that don’t have much space or struggle at maintaining consistent grass growth even before the dogs are let loose. Xeriscaping works well along former strips of grass between walkways and the building and looks natural with a blend of native plants and larger rocks, Lee says. Other grassy areas are left intact providing contrast with the pet-designated areas.

“Xeriscaping doesn’t have to be bland,” he said. “The area can be colorful, it’s just going to have decomposed granite or rock for the surface. Otherwise, traditional landscapes will be destroyed.”

CityGate Group, which manages 31 properties in the Dallas/Fort Worth area, switched to xeriscaping in October after the grass at one community was riddled with brown spots caused by dog urine and poor drainage. Grass was removed and decomposed granite was packed into pet areas, while a low spot got a river rock treatment.

A boulder or two was set to add variety.

Regional Manager Nicole McQuarry, who was familiar with xeriscaping while living in Arizona, said the community now has a nice, attractive amenity that didn’t drag down the bottom line. She couldn’t resist visiting the community multiple times as work progressed.

“I kept going out there to see it because I hadn’t done it before, and it looks fantastic,” she said. “When I was walking up, there were two residents in the dog park with two little dogs, and the dogs were running around all over the place. I asked the residents if they liked the improvements and they said they loved them. This is a really good option.”

The area, however, still must be maintained but can be cleaned by running normal irrigation cycles, as odd as that may seem to some residents.

“It’s counterintuitive to water rocks,” Lee said with a laugh, “but in this case it’s necessary. We’ll set it up on the same schedule as the rest of the sprinklers. It manages the look of the area and certainly the smell.”

The key, Lee says, is blending traditional landscape techniques with xeriscaping so the design looks planned. Adding multiple xeriscaped areas, whether used for pets or not, creates uniformity. McQuarry says that she converted a picnic area that was bare because of the huge trees at one property to rock and decomposed granite.

Converting grass areas to xeriscaping is a one-time investment that beats replacing ruined grass and plants, which can run into some serious capital dollars, Lee says. Plus, properties avoid the progression of damage that can occur so the area always looks well-maintained with regular maintenance and resident poop-scooping.

“The whole thing is your curb appeal, even if it’s inside the property,” he said. “If you have big patches of burned up grass, that’s not visually pleasing.”

Nor is a smelly dog park that won’t leave even our four-legged friends howling for joy.

Tim Blackwell writes for PropertyManagementInsider, a blog produced by RealPage.