Skip to main content
The Future of Apartment Demand
Image 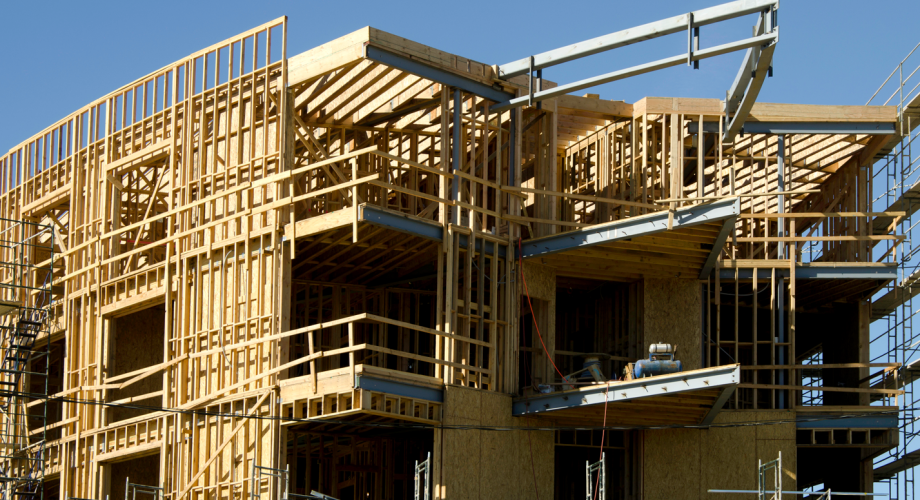 Slower demand fundamentals are forecast for the industry between 2022-2035. That is the key takeaway from the report “U.S. Apartment Demand through 2035,” published by Hoyt Advisory Services and Eigen10 Advisors, LLC, on behalf of the National Apartment Association (NAA) and the National Multifamily Housing Council (NMHC). Some 3.7 million units will be needed by 2035 to meet demand, about 266,000 units per year on average. Although many metropolitan areas will experience compelling growth in demand, a confluence of factors at the national level will lead to more muted growth than the past decade through 2035. 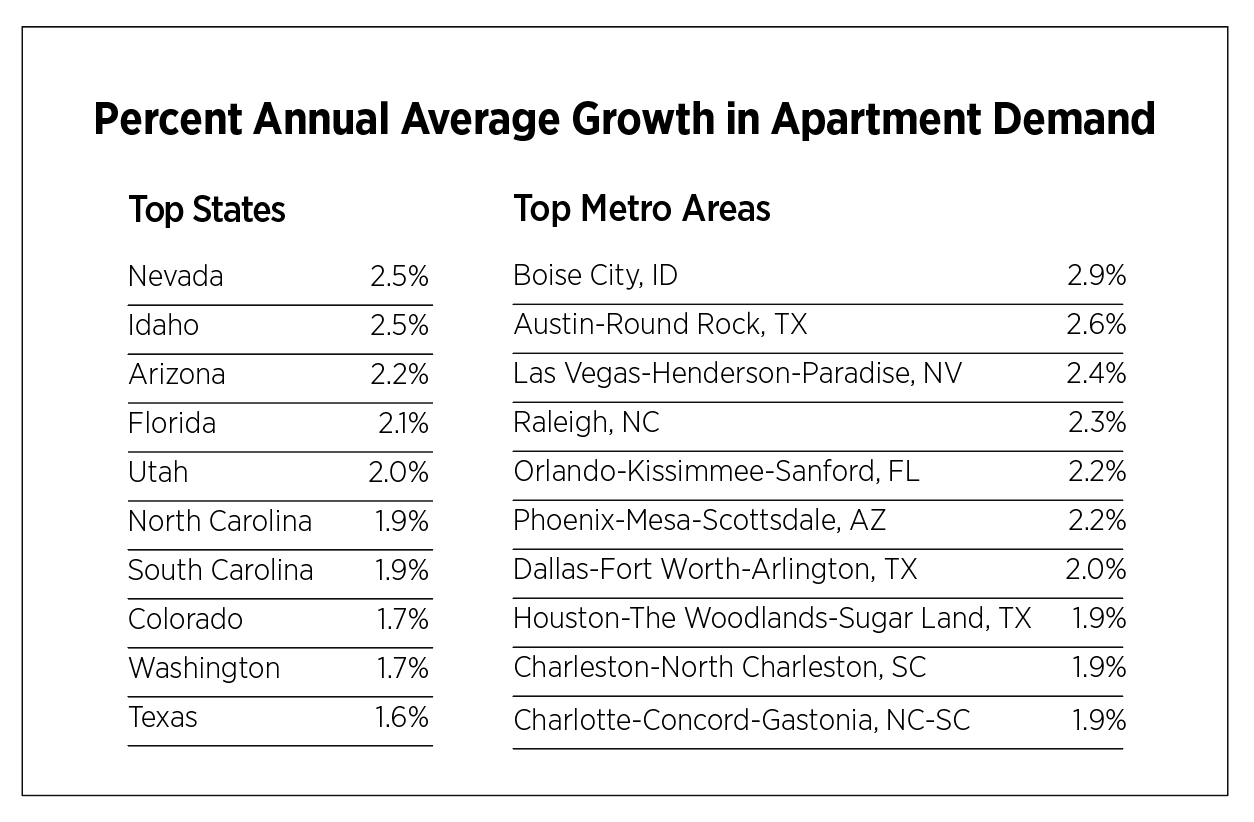 Population growth nearly came to a halt in the past two years. In 2021, the U.S. experienced its slowest rate of growth since the 1940s, growing just 0.3% annually. In the 1990s and 2000s, growth averaged about 1% per year, slowing to 0.6% over the past 10 years, and forecast to slow even further during the forecast period to just 0.4%. Largely due to the pandemic, immigration plummeted and the death rate soared. Even prior to the pandemic, an aging population led to a 12.8% increase in deaths between 2011 and 2019. In 2020, deaths increased by 19.6% and in 2021, by another 1.3%. Another mark of an aging population is a decline in births, which dropped nearly 10% during the past decade.

Immigration was already on the decline prior to the pandemic, noticeably tapering off in 2017. By 2019, immigration was nearly half the level of 2016 when it was over 1 million persons. The pandemic further crushed that figure, and in 2021, just 245,000 immigrants entered the U.S. Although the new administration has put several policies in place to improve immigration, it has been slow to return and there is some speculation that the era of globalization we have known in recent years may be giving way to a more protectionist stance around the world. Immigration is a great unknown in the forecast model and has significant effects on the results.

Additionally, mortgage rate increases and soaring home prices will impede younger cohorts from owning. Since the end of 2021, the minimum household income needed to buy a median-priced house has increased by 20%. And even though older cohorts have higher homeownership rates, the sheer size of the 65+ population by 2035 (expected to account for two-thirds of the total growth) keeps this group a strong contributor to rental household growth. Fifty-five-plus households already account for 30% of renter households, with the 65+ segment of this group accounting for 16%. These age segments are particularly important in slow growth markets that are experiencing a decline in younger population groups. In markets such as New York, Chicago and St. Louis, the 55+ age group will account for all new apartment demand through 2035. 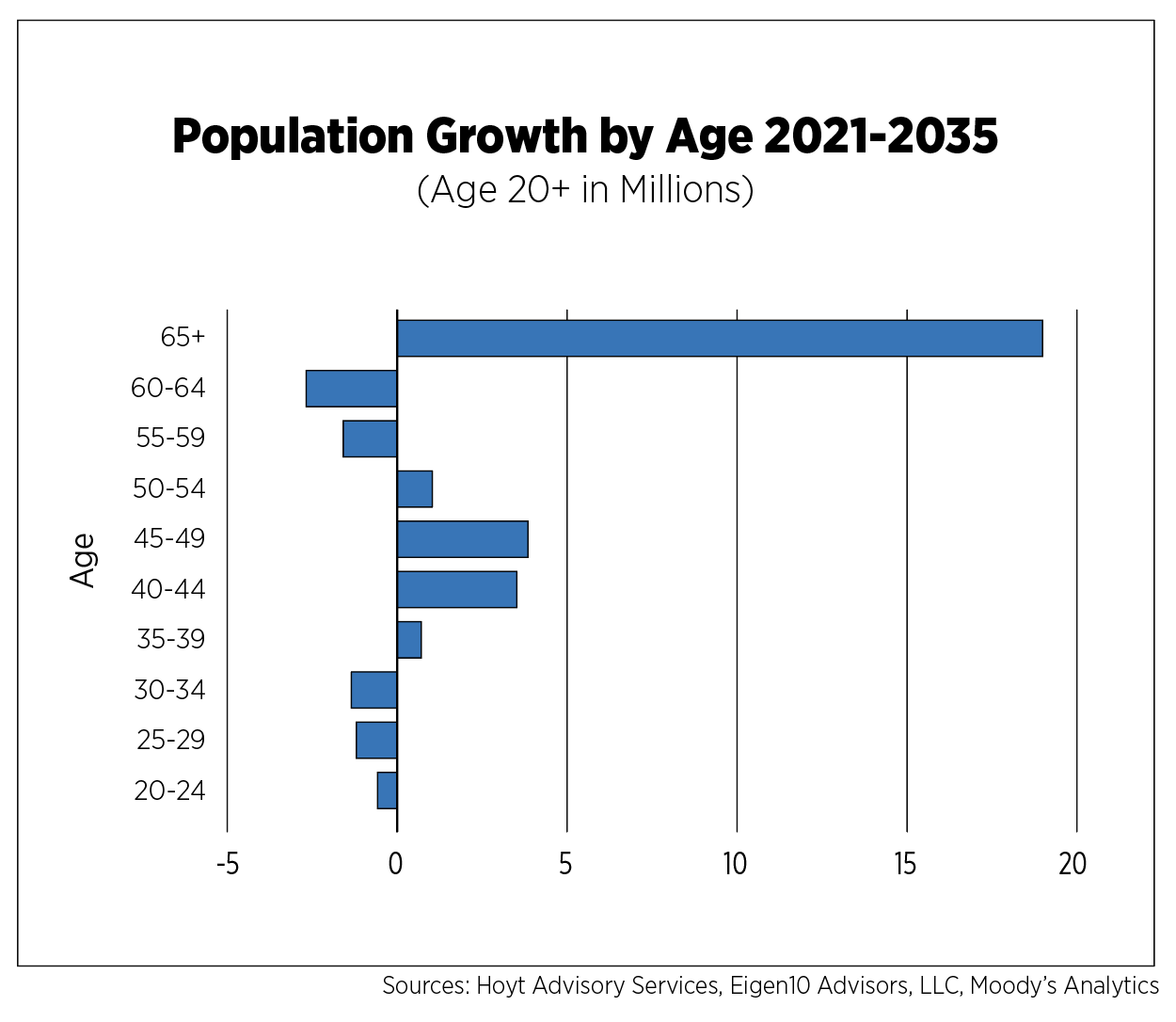 Even accounting for extraordinary levels of pent-up demand post-pandemic, the decades of underbuilding apartments mean we still have a supply shortage with which to contend. Hoyt Advisory Services estimates a deficit of 600,000 apartments (in buildings with five or more units), bringing the total forecast to 4.3 million units.

Affordability overall has become slightly worse during the past five years despite lower interest rates and the passage of laws designed to ease affordability. The roots of affordability issues vary by metro area: Some are simply a lack of new supply and higher costs to build (materials, labor, land and the entitlement process), while other markets are driven by persistently low-income levels and declining economic bases. Affordability has been further exacerbated by a loss of more affordable units, to the tune of 4.7 million rental units between 2015 and 2020, priced under $1,000 per month.

Higher costs of housing are correlated with out-migration to nearby areas or other states. Thus, economic growth is inhibited because the ability to hire and retain employees becomes more challenging in these high-cost cities. While remote work may have somewhat changed this narrative, the prevalence of hybrid work models ensures many workers still need to be occasionally close to their workplaces.

Three states will be responsible for 40% of demand with Texas, Florida and California requiring 1.5 million new apartments through 2035. On a percent annual growth basis, Nevada, Idaho and Arizona come out on top. Florida and Utah will also witness growth exceeding 2% per year on average. Strong population growth is forecast for all these states, with only Arizona to see population growth across all age cohorts. 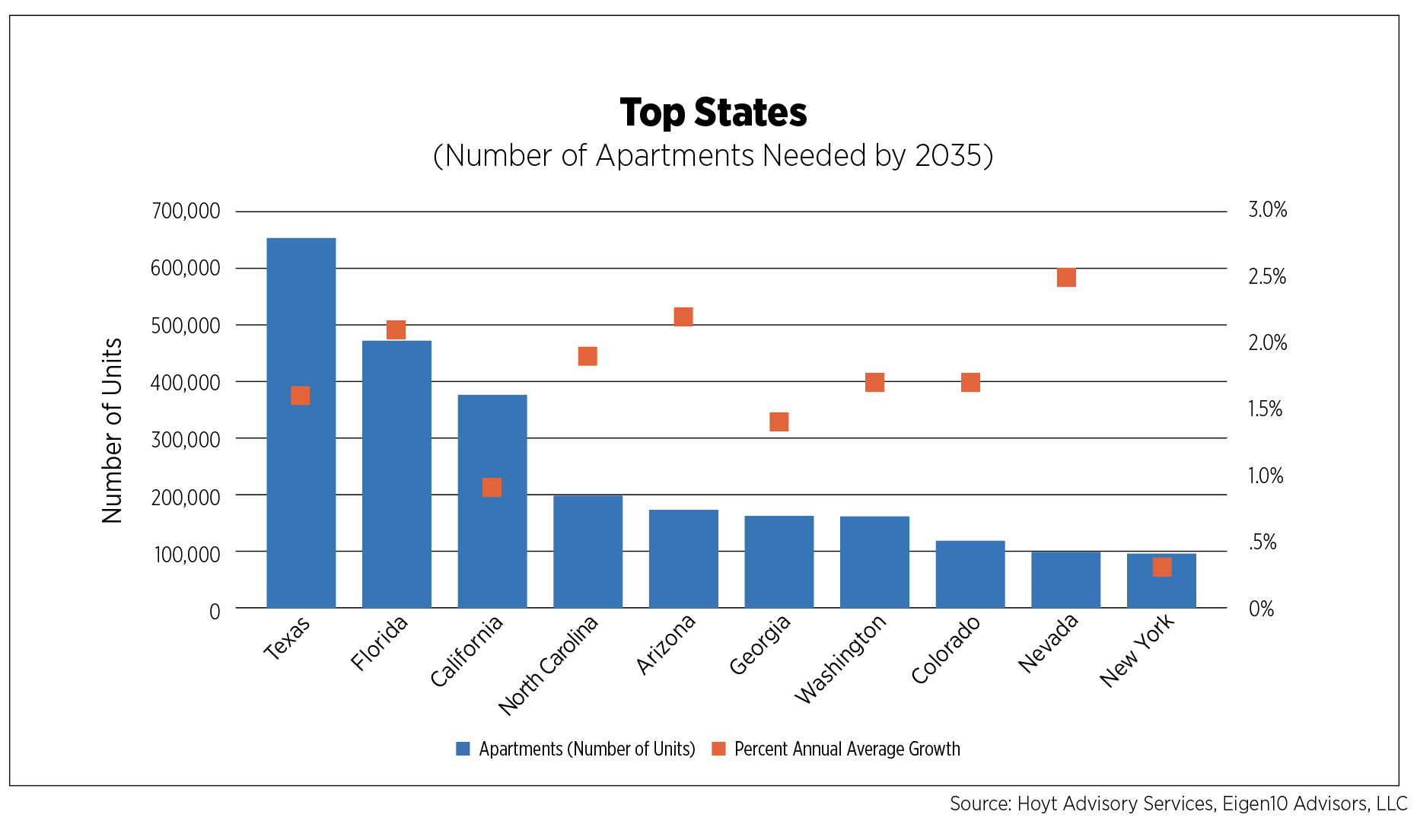 The slowest growing states, those experiencing less than 0.5% annual average growth in apartment demand are Alaska, Illinois, Connecticut, New York, Mississippi, Ohio, West Virginia, Louisiana and New Jersey. While all states are forecast to experience growth in the 65+ segment of the population, the slow-growing states all share one thing in common: The loss of population in the 20s and 30s age cohorts, a vital segment of the population when it comes to natural population growth. It’s important to note, however, that even in these slower-growing areas, demand will vary widely by municipality, price point and demographics.

At the metro level, secondary markets will drive the most demand. Boise, Austin, Las Vegas, Raleigh, Orlando and Phoenix are forecast to grow by at least double the national pace of 1.1% annually, on average. Dallas, Houston, Charleston and Charlotte round out the top 10. It’s expected that Salt Lake City, Denver, Austin and Raleigh will have one-third or more of their population growth from younger (20s, 30s) cohorts. 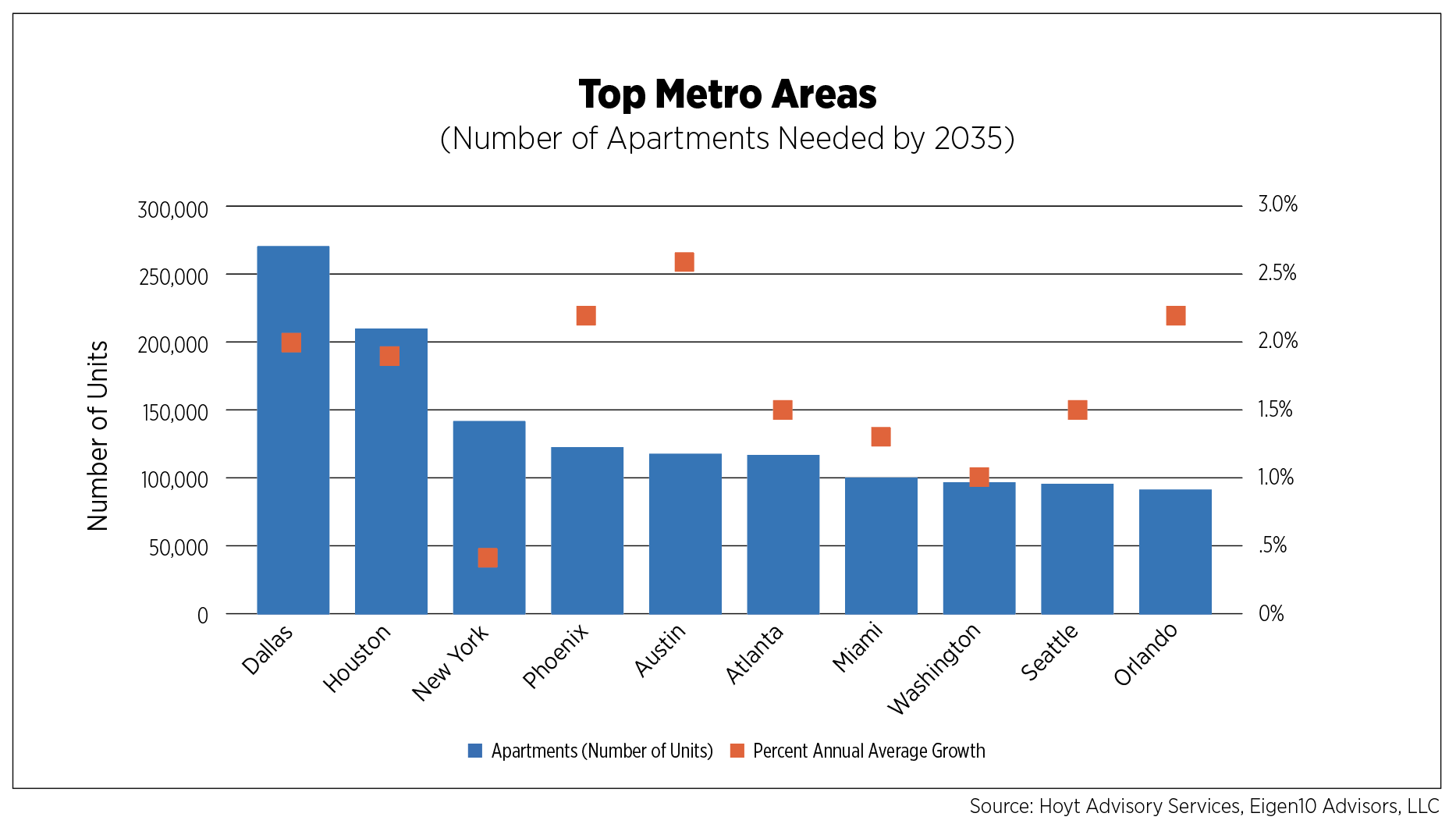 Population is expected to drop throughout the forecast period in four metro areas: Detroit, Chicago, Cleveland and New Orleans, mostly driven by a decline in younger segments of the population. Unsurprising, these are among the bottom metro areas for apartment demand (measured on a percentage annual average growth basis) and are joined by Milwaukee, New York and Los Angeles, all expecting average growth under 0.5% per year. Outside of population trends, the prevalence of older structures in these markets has a negative impact on the model results. And while some of these structures will become obsolete through the forecast period, there is tremendous opportunity for renovation and rehabilitation in these areas.

The demand forecast model takes the following factors into account: Population growth; household size; equilibrium vacancy rate (including second home demand and normal levels of vacancy); obsolescence and other change of use; and the homeownership rate, which is estimated using credit availability, housing policies, household debt, housing investment appeal and general affordability. The forecast includes an economic slowdown in 2022 and a more severe recession in 2029-2030.

The baseline forecast is presented in the report. In the downside scenario, inflation is forecast to linger, driving homeownership rates up as buyers attempt to lock-in housing costs. This is accompanied by a less global political environment leading to low immigration rates and the persistence of remote work, which correlates to higher homeownership rates in the model. In this downside scenario, 2.4 million new units will be needed, or 175,000 per year.

In the upside scenario, inflation does not become embedded in consumer behavior, a more widespread return to the office occurs by the end of 2024 and immigration rates increase to recent highs, or about 1.2 million per year. This would provide both a higher level of minorities and younger people to the population base. In this scenario, homeownership rates are only slightly lower, but the strong population growth leads to demand for 4.8 million units, or about 344,000 per year. 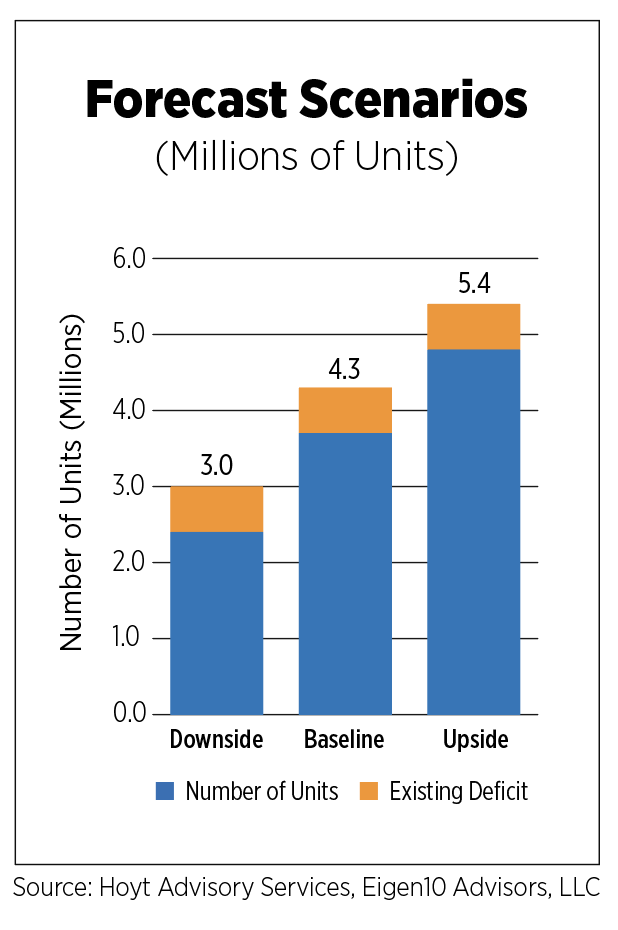 What it Means for the Industry

Although demand for apartments is forecast to decelerate, several demographic and economic fundamentals will contribute to healthy growth through 2035. By 2030, one-in-five people in the U.S. will be 65 years or older. While homeownership rates are highest for this age group (78.6%), a growing number of 65+ are choosing to rent. According to the Joint Center for Housing Studies, the number of renter households headed by someone aged 65 or older jumped 43% from 2009-2019. Active-adult communities and those in amenity-rich urban and suburban locations, as well as senior housing overall, stand to benefit from this trend.

The Hispanic population will account for 59% of population growth through 2035. This group has lower homeownership rates (49.1% vs. 65.4% overall) and larger household sizes (3.25 vs. 2.42 for other races), so increased demand should be expected for larger floorplans for multigenerational living.

Finally, when adjusted for inflation, net worth is lower for the 35-44 age group, compared to the late-80s, presenting difficulty for some of these households to save for down payments. Coupled with the lack of entry level for-sale product, these cohorts may be in the rental market longer, with a particular focus on single-family rentals in good school districts.

The slow-growing markets in the study may benefit from the aging population’s growing share of the rental market as many of them already have high concentrations of these cohorts. But increased immigration will be key to sustaining apartment demand in these areas over the coming decades.