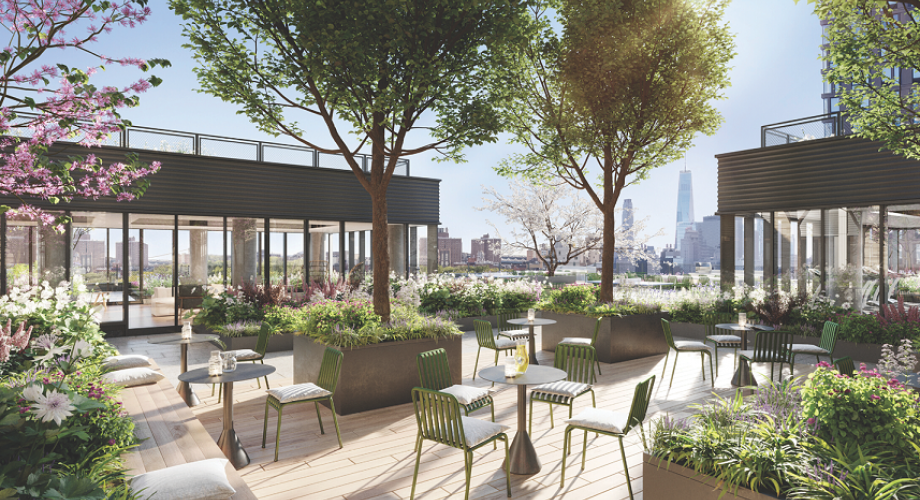 Existing apartments are being revamped to signal the end of the pandemic and increase occupancy.

Pictured: VMI, working with Taconic Partners and CetraRuddy, offers residents a special outdoor space at One Essex Crossing in Manhattan’s Lower East Side.

After a year and a half of isolating in apartments and keeping a safe, social distance from neighbors, the lower coronavirus numbers have spurred residents to step out more to breathe fresh air and socialize. Developers, property managers and design professionals are using the change as a catalyst to update their communities’ shared spaces and apartments and convey a new beginning.

While many choices depend on price point, resident demographics and climate, common denominators feature increased interest in sustainable, durable and healthier materials, more colorful palettes beyond gray (which endures), workstations because not everyone is back at their office and strong Wi-Fi throughout a property.

Staying within a budget and maintaining value over a longer time frame are key, says Meghann Van Dorn, LEED AP ID+C, Director of Interior Design at The Architectural Team (TAT) in Chelsea, Mass. Finding ways to stand out to compete are high on priority lists, too. “The key is to understand what competitors offer, which helps guide how far you need to go,” says Mary Cook, whose eponymous Chicago-based firm focuses on commercial interior design.

However, the biggest overarching trend at present may be to strive for an aesthetic and ambience that mimics a hotel. “The idea is to provide a lifestyle that suggests a self-contained world, so residents don’t have to venture out,” says Architect Victor Body-Lawson of New York-based Body Lawson Associates.

The following improvements represent the new norms, followed by those that have lost cachet, according to design professionals working to make apartment communities stand out from the crowd.

What’s In: Ways to spark interest

Energy efficiency. Whether a building seeks LEED or other green certifications, reducing energy costs for management and residents is a prime goal, which also can keep everyone healthier and meet more city mandates. Strategies range from installing better insulation to solar panels, geothermal systems, geofencing, windows with a higher R-value (a measure of how well a barrier resists the conductive flow of heat) and Energy Star appliances. “Most residents pay for their electricity, so this is of great interest,” says Body-Lawson.

In a related change, smart features are included to program elevators so they improve traffic flow and optimize energy use, Body-Lawson says. Smart features are also featured in apartments so residents can remotely control lighting, electronics, HVAC and entry, says Kelly Naylor, Director of Interior Design and Senior Partner at Minneapolis-based BKV Group.

Color. Living in an apartment no longer means being surrounded by a sea of neutral beige, white, gray and “griege.” “Blues, greens and taupes are popular since more will take a chance on color,” says Van Dorn. At the same time, gray is trending warmer, she says. Naylor sees lighter and brighter colors emerging, which helps smaller apartments feel larger.

Kitchen cabinets. Rather than typical Shaker-style boxes, cabinets have a thinner profile with a slab front often constructed from tambour wood for a classic, modern look, Van Dorn says. “We’re just starting to see this, but it reflects interest again in wood tones,” she says. Some upper cabinets are replaced by wooden shelves for a custom look. Another trend is a return to two-toned cabinetry—light cabinets above with dark ones below or upper cabinets with a horizontal wood grain for contrast, says Cook. Having two colors or materials breaks up a monotone look and suggests a custom design, says Body-Lawson. In some developments, brighter blues and greens are tested in smaller areas—on an island or along a backsplash, Naylor says.

Kitchen islands. They’ve gotten larger because of all the tasks that take place at them, along with room for storage, a towel rack and seating for stools, Cook says. But Naylor says they’re not one-size-fits-all but in proportion to the overall kitchen size.

Natural materials. Before wood became a more precious commodity, it was showing up in cabinetry, paneling and furniture—especially mid-century designs, says Body-Lawson. Throughout the pandemic, this was part of a trend toward greater interest in natural materials for a layered effect, to soften spaces, add warmth and promote nature, biophilic design and wellness.

Natural stone showed up in kitchens, bathrooms and lobbies, says Nancy Ruddy, Architect and Co-Founder of New York-based CetraRuddy. Wallcoverings are made from fibers and leathers that lend a cozy vibe, and cork is turning up on both walls and floors, especially in common spaces like hallways and lounges. And ceilings get more attention, too, from wood and other materials that add warmth and “attitude,” Ruddy says. They also help baffle noise.

Hardware. Metal remains the most popular material for hardware, with a satin/brushed stainless steel finish a top choice, Van Dorn says. Polished chrome is also popular, overtaking polished stainless because it feels more residential and elegant, Ruddy says. But also in the running are oil-rubbed bronze, matte black and brass pulls, she says. The variety available has led to more mixing, says Naylor. At the same time, Ruddy cautions, “We have done black and gold, but developers worry that in 10 years those will look dated,” she says.

Walk-in showers. These days, they’re the first choice for a bathroom, especially when space is at a premium. To conserve water, walls are outfitted with a simple showerhead rather than the formerly popular oversized rain heads, Ruddy says. A solid material for the wall is also preferred to tile to avoid dirty grout lines. A second bathroom usually includes a shower-tub combination.

Quartz countertops. Quartz, a manufactured material, has overtaken granite in popularity in the last decade because it’s considered more durable, healthy and attractive without the imperfections of granite, plus it offers more contemporary colors, says Body-Lawson. The most popular version is a white base with pronounced gray veining, often used along a backsplash for a unified look, Van Dorn says. Many developers view its use as an upgrade because of the look and its seamlessness. But as an alternative, Ruddy also likes to use recycled glass and other eco-friendly materials.

Tilework. If tiles are preferred—often because they’re a more economical solution, geometric and hexagonal shapes might be used along kitchen and shower walls and fireplace surrounds, which can add a personalized accent, Van Dorn says. These days, designers favor different colored grouts that can connote a subtle or bold look, Naylor says.

Lighting. The current look is two large lights or one long linear fixture above an island, Van Dorn says. More recessed lights are installed in an entry and bathroom, but backlit vanity mirrors are also used, which eliminate the need for overhead lights, Cook says. “It’s a cleaner look and Bluetooth-friendly,” she says. All lamps (or bulbs) are LED.

Flooring. The most popular choices are engineered hardwood in a wider plank and porcelain or luxury vinyl tile (LVT). Both endure wear well, come in various colors and are made to be installed fast and constructed so they reduce noise when walked on, says Body-Lawson. Whichever is preferred, a trend is to use the same choice throughout an apartment, Ruddy says.

Toilets. Comfort-height toilets—from 16 to 18 inches—instead of the traditional 15-inch height are favored in new buildings and remodels, says Van Dorn.

Flex spaces. More sliding walls and barn and pocket doors rather than swinging doors transform how rooms can be altered without major structural changes, Ruddy says. Some designs also feature partial walls, which proved useful during the pandemic to block views and muffle noise while many worked from home in open-plan layouts.

Hallways and front doors. To convey the feeling of an upscale hotel, more emphasis is placed on how a corridor is decorated, with a focus on a variety of light fixtures, new carpet designs, wall colors and dressed up residents’ doors with a nice doorbell, number and maybe accent material. “It’s part of a building’s branding,” Van Dorn says.

Remote workspaces. These are showing up both in units and in shared spaces by maximizing existing footprints. In apartments, designers are extending a kitchen counter and adding shelves above, building in a shelf for a desk in a large closet with solid surface material that’s easy to clean or creating a desk in a hallway or nook, says Ruddy. In shared spaces, tiny areas are fashioned for meetings or calls—sometimes as small as a phone booth, while larger spaces work well for Zoom meetings and collaborative gatherings. More furnishings selected have built-in outlets for easy connectivity, Ruddy says.

Lobbies and more. As part of the trend of making apartment lobbies resemble hotels, more iconic classic furniture pieces are included that add character, often in different neutral fabrics, colors and patterns, plus pops of color, says Ruddy. “They add freshness and in seven years or so, new pillows or accent chairs can refresh the groupings again,” she says.

Touchless products. These took on greater importance in common areas during the pandemic and continue to be favored, specifically in restrooms with soap dispensers and hand dryers and in communal kitchens with faucets that operate with sensors instead of touch, Van Dorn says.

Outdoor amenities. No longer does having just one area suffice, whether the building is affordable or market rate. A panoply of passive and active areas is included if space and budget permit: Yoga and movie lawn areas, bark parks, a pool, multiple grilling stations, hammocks, Ping-Pong, quiet garden areas to meditate and read and variations based on regional interests, Cook says.

Lending DIY “libraries.” As part of re-entry to socializing, buildings are setting aside areas where residents can access tools and supplies they might not own or to connect over common interests such as bicycling with rooms outfitted for storage, repair and just talking, says Naylor.

Illuminated exteriors. Adding LED or neon-style lights to an exterior so that it glows and changes colors helps buildings literally stand out and reinforce their branding, says Body-Lawson. “These are permanent features, not installed seasonally or at holidays,” he says. As an example, he cites The Arches’ towers in the Bronx, N.Y.

What’s Out: 12 features falling out of favor

The developers who are merchant builders and their property managers may think differently about the designs, materials and products in their new buildings. They build to sell their assets once they’re fully occupied, and their inspiration is not hotels but single-family houses, says Steve Hallsey, Managing Director of Atlanta-based Wood Partners. These days, his company, which currently builds in 18 states, is putting in stone and granite on countertops and backsplashes, bigger islands and a wine fridge in the kitchen, as much storage as they can accommodate throughout the unit, balcony—and bigger is better—a bathtub and shower in the main bathroom and a shower in a second bathroom. Wood Partners is also adding more common area office spaces with doors so people can leave their units to work virtually. “The next move most of our residents make is to a single-family home,” he says. The company also is increasing the size of its units—two bedrooms are pushing up to 900 square feet from 860, and it’s not building as many studios after finding they were vacated the fastest of its unit types.