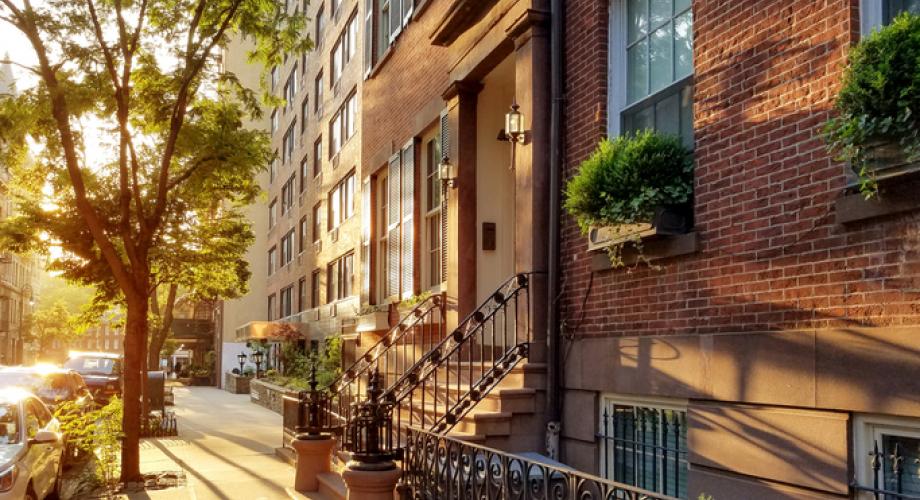 Although apartment fundamentals in the second quarter revealed the economic effects of the Coronavirus pandemic, solid demand during the third quarter signaled the beginning of a recovery. According to RealPage, national occupancy fell by 0.6 percentage points year-over-year, albeit improving by 0.2 percentage points since the previous quarter. Job growth and pent-up demand fueled leasing activity. REIS reported that Buffalo, Albuquerque, Lexington, Dayton and Wichita were the strongest markets for occupancy growth year-over-year. 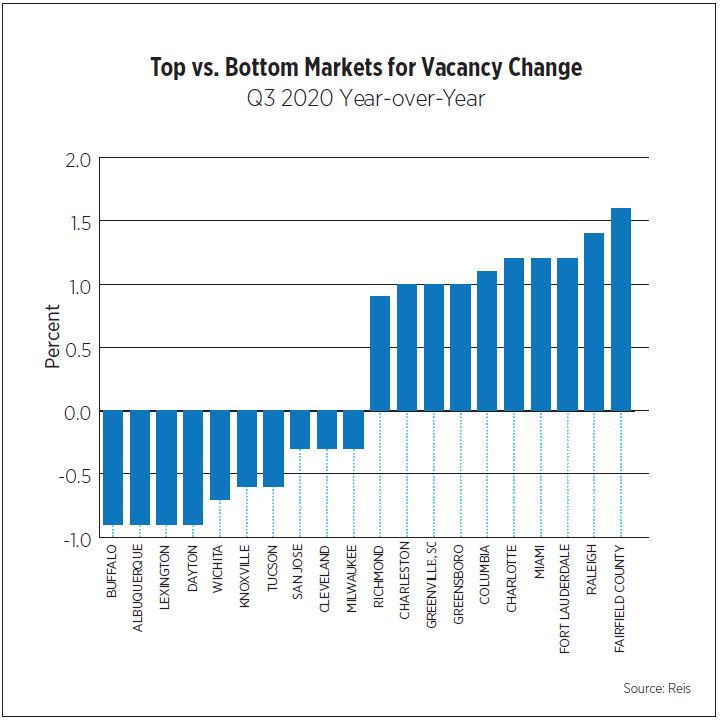 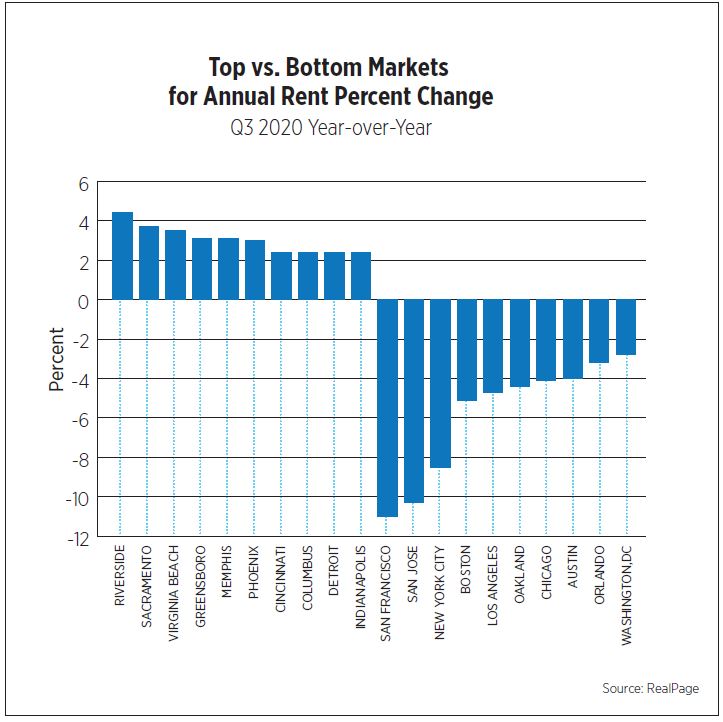 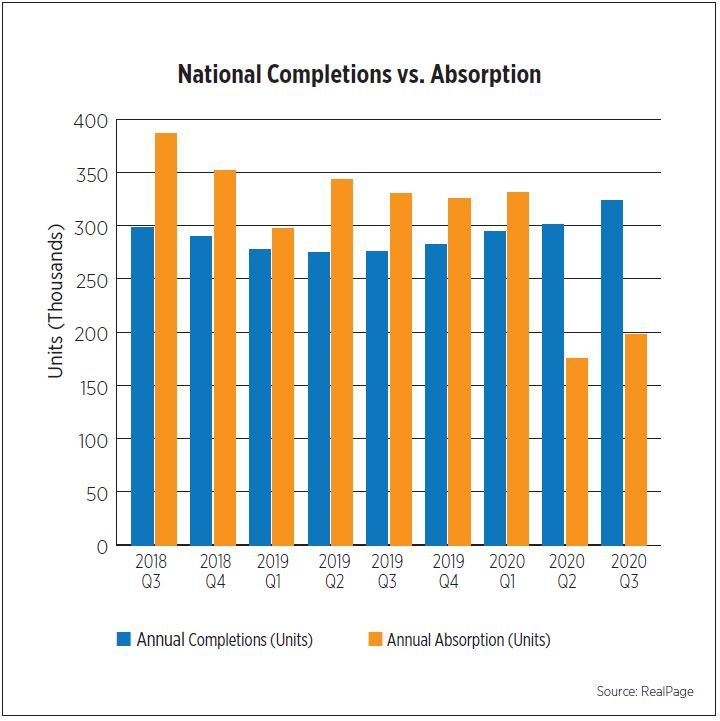 Multifamily investments have also begun to show signs of a recovery in Q3 2020. According to Real Capital Analytics, closed transactions for apartment property sales totaled $23.3 billion. This represented a 50.2 percent decrease year-over-year yet improving by 17.0 percent since Q2 2020. The average price per unit stood at $163,485, falling by 6.7 percent. Although price appreciation has slowed since the beginning of the pandemic, investors are still realizing the values of apartments despite decreasing rents and reduced transaction volume. Investors exchanged nearly 147,535 units, a 50.3 percent decline from the previous year. The average cap rate was 5.3 percent, down by 27 basis points. Individual property and portfolio sales volumes were down 52.6 and 37.9 percent, respectively, compared to the previous year. 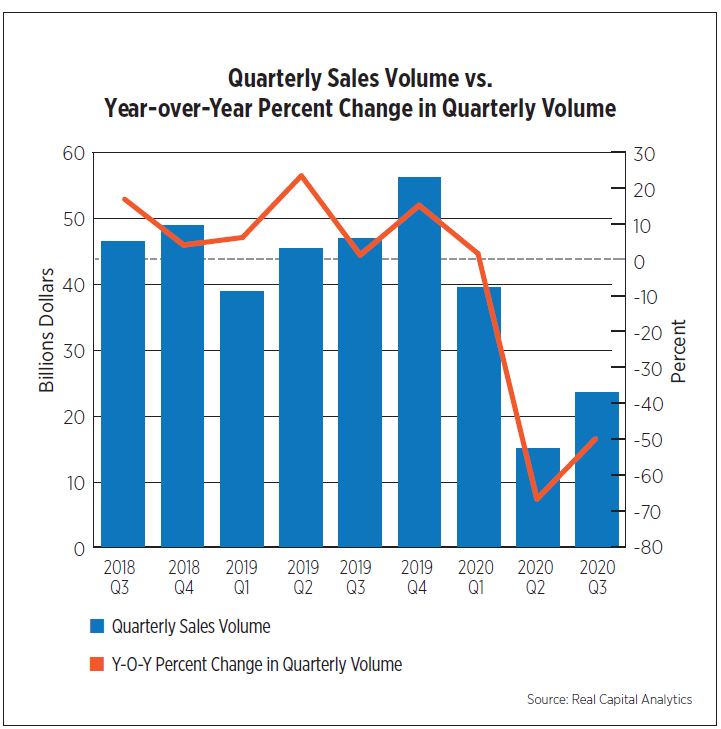 After dropping by a record 31.4 percent in Q2 2020, Gross Domestic Product (GDP) rebounded in Q3, increasing 33.1 percent but only recovering 75 percent of the losses. Consumer spending was responsible for most of the gains while trade and government spending, with no new stimulus packages and state and local government output declining, negatively impacted GDP.

The employment picture continued to improve, but the pace of growth has started to slow. With 638,000 jobs added in October, the U.S. remained 10 million jobs behind February’s level. The unemployment rate fell by one full percentage point to 6.9 percent. Initial claims for unemployment remained persistently high, averaging 784,000 per week in October, above the highest pre-COVID level. Continuing claims for unemployment have been on the decline, however, some of which is attributable to re-entrants into the job market, but much of it a result of expiring benefits.

Labor market conditions varied widely by geography and sector, with a 10-percentage point difference in unemployment rates among the 50 largest metropolitan areas and Washington, D.C. Cities that rely on tourism and convention business as well as entertainment still had double-digit unemployment rates as of September, with Las Vegas (14.8 percent) and Los Angeles (13.6 percent) at the bottom. Half of the top 10 metros for low unemployment rates were in the Midwest. Kansas City and Oklahoma City were tied for the lowest unemployment rates at 4.9 percent. 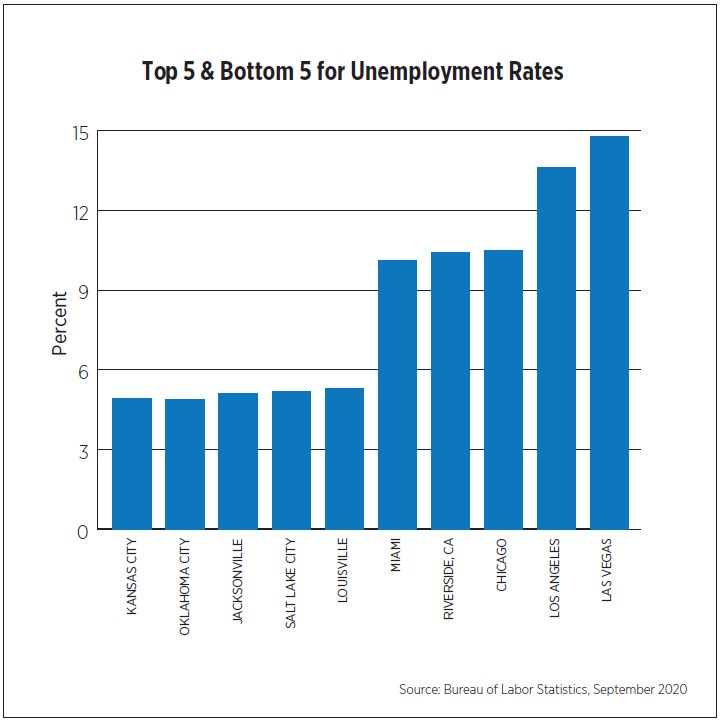 As for sectors, winners and losers were often in the same sector, such as transportation/warehousing and retail trade. Employment in transit/ground passenger transportation was down 24.4 percent year-over-year while courier/messenger jobs ballooned by 14.1 percent. Similarly, in retail trade, employment in building material/garden supply stores was up 7.2 percent while employment in clothing/accessories stores contracted 24.3 percent. 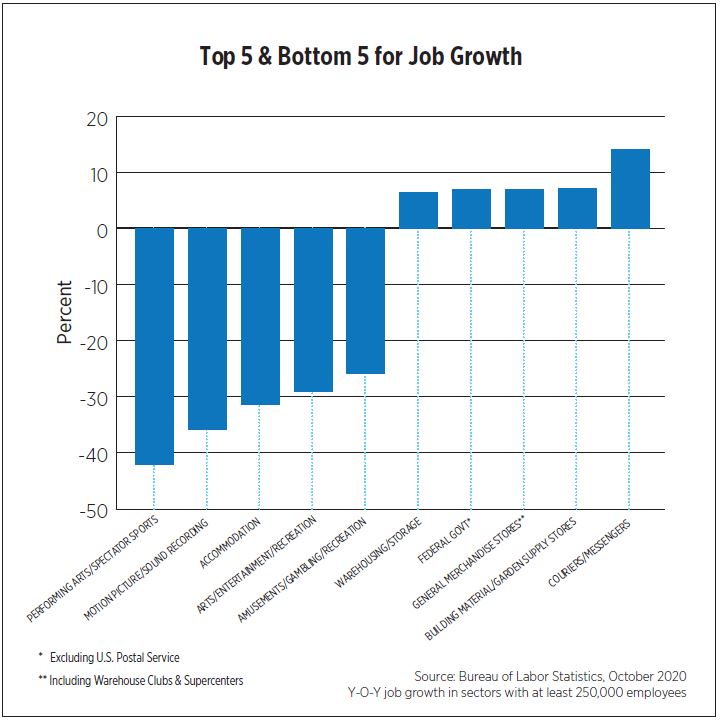 The single-family housing market has led the recovery with many indicators breaking records as they returned to pre-pandemic levels, exhibiting a V-shaped recovery and then some. The National Association of Home Builders’ Index has seen record highs month after month in builder confidence in current and future conditions. Both new and existing home sales surged immediately after lockdowns were lifted in the spring and have stayed elevated through October, while prices for existing homes have witnessed double-digit growth for three consecutive months, according to the National Association of Realtors. With housing supply at an all-time low and increased costs for materials and labor both impacting prices, prospective buyers may soon be shut out of the market, dampening the feverish pace of growth.

Recent news about COVID-19 vaccines potentially being available to the most vulnerable populations by the end of the year bodes well for a stronger recovery in 2021. However, without additional fiscal stimulus, more business failures can be expected in addition to eroding household balance sheets, particularly for the millions who remain unemployed and face expiring benefits in the coming months.

The outlook for the apartment sector will vary widely by asset type and especially geography. Higher-end apartments in large coastal cities have already taken a hit on rents and occupancy and continued weakness can be expected until there are large-scale re-openings of businesses and services. More affordable properties in smaller cities and suburban locales should fare better in the short-term, but again, a lack of fiscal stimulus could easily upend that expectation.