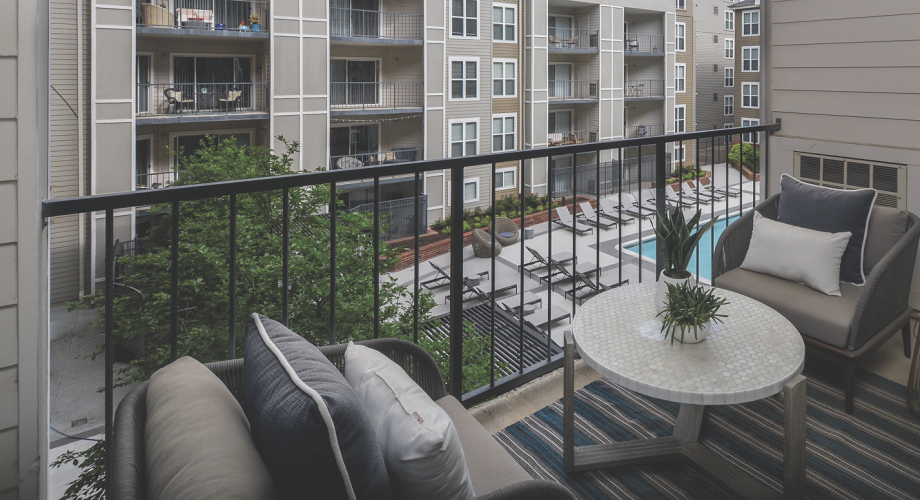 Once a way to add space for fresh air and plants, use as extra storage or (tsk tsk) sneak a cigarette, balconies now offer developers a chance to attract renters, earn additional income and accelerate lease-ups.

Balconies have long been a part of many apartment buildings, with the earliest examples dating back more than 2,000 years to ancient Greece, designed to increase air circulation in hot weather and bring natural light into interior rooms.

They continued to play an iconic role in fiction and real life, from star-crossed lovers Romeo and Juliet to Eva Peron’s triumphant balcony appearance at her Presidential Palace.

However, it wasn’t until the 1950s in the United States that balconies were built as an amenity for high-end apartments. A decade later, they became more common in middle-class developments such as New York City’s Lincoln Towers, constructed during a major urban redevelopment.

Now, they’re showing up in buildings nationwide rather than only in warm weather locales. For example, Milhaus development projects include them in its 10 states, including its Indianapolis headquarters, says Jake Dietrich, Vice President of Development.

They also are found at all price points, from affordable senior housing communities such as Dominium’s The Legends of Blaine in Blaine, Minn., to luxury dwellings with multiple balconies like a new, still unnamed building in Dallas’ Turtle Creek neighborhood, developed by USA Infrastructure Investments and designed by Chicago’s Lucien Lagrange Studio.

Most share something in common. “The best balconies are not just a place to stand for a second and get some fresh air but extend living and let people pursue an activity such as cooking, dining, stretching out and even working,” says Mary Cook, President and Founder of Chicago-based Mary Cook Associates, a commercial interior design firm.

Diana Pittro, Executive Vice President at RMK Management Corp. in Chicago, which manages apartment homes in four Midwestern states, thinks the pandemic is the primary factor driving the surge. “People are spending more time at home, which, of course, means more time on balconies if they have them,” she says.

Nick Hollenbeck, Director of Sales and Marketing for Livingston, N.J.-based Sterling Properties, a developer focused on the tri-state area, says the number of inquiries for those looking for private outdoor space has been “unbelievable. Serendipitously, we had The Vestry in Montclair [N.J.] opening with big balconies and terraces,” he says.

In fact, private outdoor space may now rank only second to rent concessions on residential wish lists. The increased interest is evidenced by the uptick in renters’ searches for a “balcony,” which grew 84% last year, according to data from Zumper. The change has helped private outdoor space leapfrog over shared outdoor space, according to Lela Cirjakovic, Executive Vice President at Chicago-based Waterton, a value-add developer that operates in 16 states.

Part of the appeal of balconies is that many renters are willing to use them and terraces—which typically differ in construction, location and size—in ways they wouldn’t have in the past. For example, they might now bundle up and go outside with a blanket on a beautiful winter night, says Kris Lindahl, CEO and Founder of Kris Lindahl Real Estate in Blaine, Minn. Many who downsize from single-family homes want a balcony so they won’t have to give up private outdoor space, says architect My-Nga Lam, AIA, a Design Principal with Lucien Lagrange Studio.

Developers have other reasons to incorporate balconies. Some have long considered them a way to differentiate their buildings and units, the approach of Atlanta-based merchant builder Wood Partners, which has Class A apartments in 18 states. Philadelphia-based developer Dranoff Properties gave most of the 245 apartments a balcony at its recently built Newark, N.J., community, One Theater Square in the heart of the city’s arts district.

Other developers do so to provide fresh air and greenery as scientific evidence mounts that those features improve mental well-being. Leasing numbers also reveal they help rentals better compete with single-family homes with yards and compensate for less interior square footage in units as some apartments were downsized when amenity spaces were increased, says architect Ed Bradford, a principal at TAT in Chelsea, Mass., outside Boston.

Developers have also learned the importance of showcasing a view, the case when Baltimore-based RD Jones & Associates designed One Cardinal Way in St. Louis with balconies facing the city’s baseball stadium. Doing so allowed Baltimore-based developer The Cordish Companies to charge premium rents. “Residents wouldn’t pay the same amount if the views were of I-95,” says Rebecca Jones, RD Jones’ Founder and CEO.

How much extra can be charged varies—influenced by view, balcony size, direction faced, construction and maintenance costs and overall market conditions.

In his experience, real estate salesperson Michael E. Smith with Corcoran Group’s New York City office says the uptick in cost might be 15% to 20% above the monthly rent. “That’s especially true if the balcony clears trees and provides a good view,” he says.

Softening rent prices in several markets also mean—at least now—that costs for an apartment home with a balcony may have decreased, which allows some renters to afford a larger unit.

The greater desirability of balconies and terraces may also translate into faster leasing. Smith knew he wanted a balcony and was willing to downsize to get one that faced south. “I love morning light and waking up with the sun is very important to me,” he says.

Yet at the same time, there are caveats. Many developers follow the mantra of not attaching a balcony to each unit. To do so would eliminate some of its “specialness” and make it less feasible to charge extra, says Joshua Silverbush, who oversees market research and analysis at The Marketing Directors, a New York City-based advisory firm. As an example, Wood Partners prefers to have only 50% to 60% of a building’s units with outside space, says Steve Hallsey, Managing Director.

And because of where some renters live, they may prefer a window that opens and more interior space than a balcony used only a couple of months a year, says Cook.

Many experts remain uncertain how much the pandemic will influence balcony design. Some, like Smith, expect them to get larger, along with the interior of apartments, as more renters work from home and have children attend virtual school. Dietrich of Milhaus thinks the more important, rhetorical, question is, “Can developers afford NOT to make this change?”

Older balconies may measure 5-by-5, but the newer ones are often bigger to be more functional and accommodate more people and furnishings for a true living space, says architect Ed Bradford of TAT. A better size, he says, is in the range of 7-by-10, and some at its Avalon Sudbury-designed building in Sudbury, Mass., are 10-by-15. At the CetraRuddy-designed ARO in New York City’s Theater District, the 62-story apartment tower has a curved form with glass curtain wall wrapped in a steel “net” that creates space for balconies, some 6 feet wide. The same firm’s Oskar building, also in New York, has balconies that vary from 100 to 400 square feet and create a cascade effect down five stories. Despite the trend toward larger, integrating balconies into the overall building’s façade design for an aesthetic impact is more important, says Mary Cook of Mary Cook Associates.

2. Smaller. Among the latest changes are more Juliet-style narrow balconies designed to permit a bit of fresh air but not long stays and add to the aesthetics of the façade as they historically have done on European buildings. Lucien Lagrange Studio included them on all apartments for a Sacramento, Calif., community being designed.

3. Location. While most balconies are placed directly beyond the main living space,
Chicago-based apartment brokerage firm Downtown Apartment Company, says the current hot spot is to be off the main bedroom in larger units, as in the townhomes at Lendlease’s newer Chicago Porte and The Cooper at Southbank, both of which also have terraces off living rooms.

4. Number. Apartments are taking their cue from condos where units may have more than one balcony and sometimes off every room, as in the case of Adache Group Architects’ 30 Thirty North Ocean boutique building in Fort Lauderdale, Fla. Apartments, especially in luxury buildings, now may have a second or third balcony, says Cook.

5. Style. Often, the railings are enhanced with more glass or another transparent material that doesn’t obstruct a view or more detailing that matches the building’s design. Floors are upgraded from concrete—sometimes to a faux material like Trex or pavers that wear well outdoors. More electrical outlets are included for better lighting through recessed cans or wall sconces and for powering up laptops and phones for working or schooling from home. Doors into units are constructed with new types of lower-maintenance glass and better seals for the frames, which are often less visible, inspired by the trend in shower doors. Dividers between adjacent units may also be fabricated from nicer materials such as Ipe wood or steel.

On their own, residents add furnishings, from ceiling fans to patio heaters, vertical gardens, upholstered seating, pillows and rugs. New York stager and professional organizer Amanda Wiss of Urban Clarity says she often does so to evoke the look of an interior room.

6. Rules. Because it’s easy for balconies to become storage and junk spaces, more building managers are enforcing rules about how they should look aesthetically and for safety, even orchestrating “housekeeping checks,” says Diana Pittro of RMK Management. Her company engages residents in a positive way by sponsoring holiday balcony décor and spring landscaping contests.  —B.B.