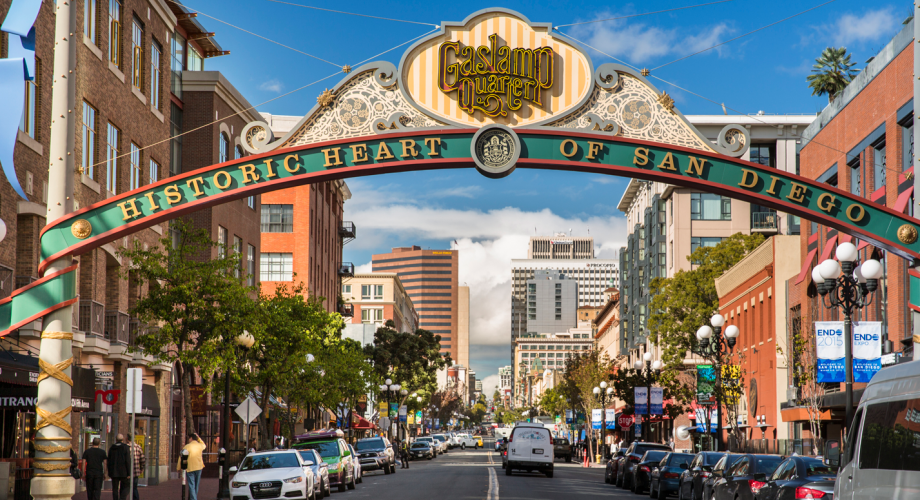 Expect temperatures to be in mid-70s in mid- to late June. The area is one of the sunniest locations in the entire U.S., so be prepared with warmer-weather gear like sunglasses and sunblock. And don’t forget a towel if you’re hitting the world-class beaches.

With miles and miles of coastline, San Diego features numerous watersport activities. This includes surfing, kayaking, boating and fishing. Take a trip to two of the best U.S. beaches: La Jolla Cove and Coronado (No. 9 and No. 15, respectively, on Tripadvisor’s Best Beaches Awards). The historic Hotel del Coronado is also close by. Pacific, Mission, Ocean, Imperial and Black’s beaches also dot the coastline.

Known for its art and culture, the historical landmark features specialty shops as well as authentic Mexican food. Visitors can also experience early life in the area at the Historic Park. Overlooking Old Town is Mission San Diego de Alcalá, California’s first mission. It is now home to the Junipero Serra Museum, the founder of the mission.

The area is home to 16 blocks of shopping, dining, entertainment and nightlife. Located right down the street from the Convention Center, get a taste of craft beer and al fresco dining at more than 100 restaurants, shops, nightclubs and pubs. Also visible are nearly 100 historic buildings and potential haunted happenings.

For those willing to trek a bit farther, two fun-filled parks are nearby. Roughly 40 miles north of the Convention Center is LEGOLAND California Resort, with more than 60 rides, shows and attractions for families and children. About 16 miles south of the Convention Center is Sesame Place, where families and children can meet Sesame Street characters and ride themed attractions.

Less than 10 miles from the Convention Center, SeaWorld features animal life including whales, penguins, dolphins and sharks. Guests can also experience animals up close with different encounters. There are also interactive exhibits such as tidepools and touch pools. For the more daring, thrill rides and rollercoasters await including the brand-new Emperor—the tallest, fastest and longest dive coaster in the state.

After being decommissioned in April 1992, the longest serving aircraft carrier of the twentieth century waited until 2004 to open as a museum. The USS Midway took 17 months to build and is named after the June 1942 Battle of Midway.

The San Diego Padres are at Petco Park all week (Monday, June 20 through Sunday, June 26), just a short trip from the Convention Center. Up first is a three-game series against the Arizona Diamondbacks followed by a four-game set against the Philadelphia Phillies.

More than 100 educational sessions await Apartmentalize attendees in San Diego, as well as ample networking time for reconnecting with colleagues and making new connections. And don’t forget the Apartmentalize Exposition, featuring the latest and greatest solutions for the rental housing marketplace.