Enough about urban chic, the strongest performing sectors today and next year are 'B' communities, often in suburban job hubs.

Apartment revenues in the nation’s 100 largest metros now top pre-recession levels by about 14 percent, taking into account both rising rents and the recovery in occupancy. That’s a great performance considering that the country’s job count didn’t return to its previous high until Spring 2014.

Another solid overall growth tally appears likely in 2015, but the outlook appears brighter in some product niches and locations than in other segments of the market.

The best performances should come in the middle-market communities that comprise so much of the total apartment stock and in top-tier developments located in suburban settings. High-end urban core properties could face a more competitive leasing environment that appears apt to dampen their revenue growth prospects.

The U.S. apartment market outperformed expectations in 2014, with strong overall momentum spurred by better-than-anticipated demand. An improving economy provided the biggest boost to that absorption tally.

Total job production climbed about 19 percent from the sluggish pace seen from 2011 to 2013, according to information from the Bureau of Labor Statistics. Furthermore, in most metros, higher-paying jobs began to account for a growing share of the total additions, supporting new household formation. Net demand for apartments also was helped by the fact that loss of apartment renters to first-time home purchase remained well below the historical standard.

With demand proving impressive, occupancy held strong despite the fact that new product completions surged to a 13-year high. As of Q3 2014, occupancy stood at 95.8 percent, up 40 basis points on an annual basis in contrast to the mild slide in occupancy that seemed likely when the year began.

Tight occupancy translated to considerable pricing power for owners and operators. Effective rents for new leases jumped 3.7 percent during the year ending Q3 2014. Rent increases actually gained momentum during late 2013 and on into 2014, in contrast to the more typical slowdown of pricing growth seen when completions rise.

Jam-Packed Communities Should Remain That Way

Middle-market communities were 2014’s top achievers for overall revenue growth, and these properties in the middle range of the pricing spectrum are expected to maintain a performance premium during the near term.

With current occupancy just a hair under the 96 percent mark, the developments are jam-packed, and they should remain that way. Residents generally can’t afford to move up to higher-end projects. In particular, middle-market residents are priced out of the new stock coming on stream, given those brand-new units typically are commanding such high rents. Furthermore, housing purchase isn’t an option for most residents in middle-market properties: These households just don’t have the incomes needed to buy homes.

It’s even tough to move from one mid-priced apartment community to another in many parts of the country, as vacancies are so few.

As of late 2014, annual rent growth in class B+ apartments was running at just over 4 percent. The rate was even higher at nearly 5 percent in the class B to B- stock.

Fairly similar performance results appear likely in 2015 but, at some point, residents of middle-market apartments are going to have difficulty digesting big rent increases when wage growth is more modest. While it does not yet look like we’re hitting the wall on affordability in this middle-market segment, wise industry professionals will be diligent in watching for the first signs of that shift.

The key signal to monitor might be an upward shift in combined household living arrangements. A bump in roommate households within the renter prospect mix could tell us that the middle-market product segment is about to become more vulnerable. In some places, there is downside risk from households combining and then opting to rent single-family homes rather than apartments.

Established class A apartment projects registered late 2014 occupancy just over 96 percent, so the past year’s notable increase in new supply didn’t lead to more vacancies in the already-existing top-tier stock. Rent growth in this niche did slow to some degree, but the annual price increase was still healthy at approximately 3 percent.

Looking specifically at developments finished during the current construction cycle (the 2010+ completions), late 2014 occupancy came in at 93 percent, which is a healthy rate given the product niche includes just-finished projects moving through initial lease-up. At communities operating long enough for the first leases to turn over, rent growth just over 1 percent proved typical—not bad considering most brand-new communities were opened with rents well above pro forma prices.

While those overall performance numbers for the top properties in the apartment market are encouraging, digging into patterns by location—urban versus suburban—adds insight.

In the suburban space, healthy performance stats were the norm recently. Occupancy and lease-up rates proved impressive, and rent growth held solid. Influencing the performance trends, suburban locations have accounted for a smaller-than-typical share of total new supply so far in this building cycle. But that shouldn’t be interpreted as meaning there have not been many completions in the suburbs. While urban core locations have been the most active individual submarkets for construction in many of these metros, the various suburbs combined to account for more total product.

Important to the outlook for top-tier suburban product, owners and operators are reporting strong apartment demand coming from young, single renters. During the past year or two, clear evidence has been established that the fairly widespread perception that Millennials won’t live in the suburbs under any circumstances simply isn’t true. Within suburbs that are employment, entertainment or transportation hubs, new communities are attracting 20-something renters in droves.

A sizable block of new product delivering all at once certainly has been a factor in the more competitive leasing environment emerging in the top-tier urban core segment. But there also are bigger picture considerations that could impact the outlook in that niche, too.

According to some owners and operators, those moving into the newest urban core projects are older than was expected when these communities were on the drawing board. Key renter blocks include the oldest of the Millennials—often couples rather than singles—and downsizing empty-nesters. The youngest, single renters, then, may want to live in downtown and downtown-adjacent apartments, but comparatively few can afford that choice in one-person household living arrangements. 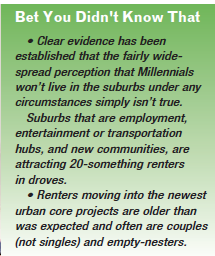 During 2015, rent growth in top-tier urban core apartment properties once again should trail the price hikes for the newest suburban projects and the middle-market communities, mainly because this sector will continue to comprise a bigger-than-usual share of new supply. For those planning more of this type of product, 2015 could be the right time to consider how many more households exist who can afford these high-priced units. Also, developers should take another look at product design in the urban core segment, given that many of the renter households now opting for this niche appear to be larger in size—two or more people—and somewhat older than was anticipated.

The coming year’s overall apartment performance levels are expected to prove favorable once more. But those overall stats won’t tell a complete story: Tailwinds remain strong in some product niches and locations, but headwinds to sustained momentum perhaps are becoming more pronounced in other segments of the market.