The rental housing industry is in prime position to weather an economic storm.

The specter of an imminent economic downturn has dominated the recent popular press. This makes sense: Negative news sells, and we are in the longest period of sustained economic growth the U.S. has ever experienced. So, the good times must end at some point, right? Well, we do know two things: 1) there is a zero percent chance we are in a recession today, and 2) the probability of another recession is 100 percent, as Jamie Dimon recently opined. The more important question is not when but how a potential recession might play out, and how this would affect rental housing performance.

Economic fundamentals and capital markets are sending mixed signals about the current health of our economic growth. On the fundamentals side, jobs are plentiful, the unemployment rate remains near historic lows and wage growth is strong (if you look beneath the headlines). Perhaps the most encouraging news is that workers with the lowest salary levels have experienced the fastest wage growth during the past year, near 4.5 percent, according to the Atlanta Fed. These strong labor market trends have led to many more people with jobs and higher paychecks, many of whom choose to rent apartments, supporting the elevated levels of rent growth in many markets across the nation.

Granted, the rate of job gains and GDP growth are slowing and are expected to continue to ebb in the coming years. However, this deceleration is not due to a fundamental flaw in the economy but rather reflects demographics: As more and more Baby Boomers retire, they are just being offset by the number of young adults entering the workplace. And with the number of unemployed people so low, large gains in payrolls are difficult. Despite this deceleration in the overall economy, a rising propensity to rent and favorable demographics should provide a solid foundation for apartments in the coming years.

Perhaps the best reflection of overall investor sentiment is the market for 10-year U.S. Treasuries. Money has flowed into 10-year Treasuries recently, and because when bond prices go up, yields go down, the 10-year Treasury rate has declined from more than 3 percent in late 2018 to 1.75 percent, currently. However, the four Fed rate hikes last year have resulted in elevated short-term rates, and certain portions of the yield curve are now inverted. For example, the 3-month, 6-month and 1-year Treasury rates are all above the 10-year Treasury yield. Normally, bond investors require a higher rate of interest for longer-term bonds, so short-term rates above long-term rates is an anomaly. This suggests that short-term rates are too high, and that the Fed will have to cut rates soon to combat a downturn.

As headlines indicate, yield-curve inversion is typically associated with a recession lurking around the corner. Witten Advisors’ preferred indicator is the monthly average spread between the 10-year and 2-year Treasury rates, which removes the volatility associated with the day-to-day swings. The chart shows the predictive power of this spread: The 10-year/2-year has inverted prior to every recession since the early 1980s. In the past five recessions, this spread inverted about 1.5 years on average before the onset of a recession. Thus, if the 10-year/2-year spread does invert for a full month soon (which has yet to happen), we would expect job losses to arrive in early 2021. 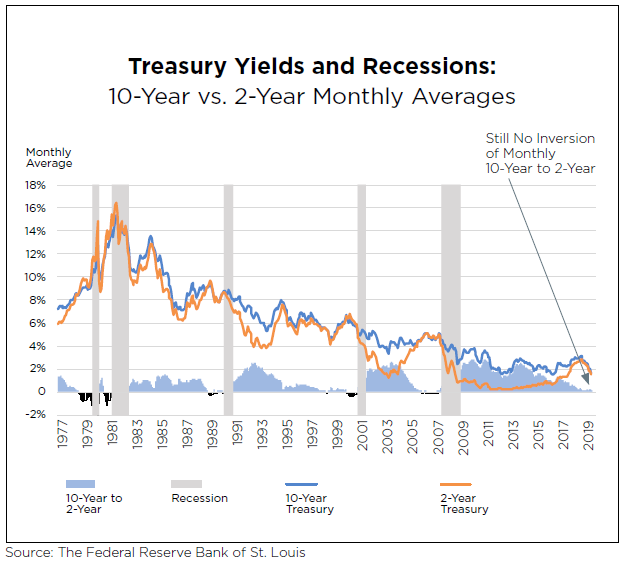 The current spread has narrowed but remains positive, although it dipped to a razor-thin margin of 6 basis points in August. This is reminiscent of the late 1990s, when the spread was slim but lasted for years. But even if the curve inverts and another recession arrives, we believe that it would be more of a “rolling recession,” no deep job cuts and a quick recovery, similar to what we experienced during the early 90s downturn. Part of the reason behind this is that the large excesses that emerged before the tech-wreck and Great Financial Crisis are not apparent today and banks are in much better capital positions.

Questions From Our Clients

While Witten Advisors does not expect a recession, plenty of questions are being asked about how a potential downturn would affect the rental housing industry. Solid economic growth has spurred household formation, but total construction levels have remained subdued this cycle, which has resulted in a deficit of approximately 1 million housing units. That is, we are severely underhoused as a nation, which would support housing in general during an economic contraction. That overall shortage also applies to rental housing, where we have close to 400,000 fewer vacant units that normal. If a short and shallow recession does arrive, then we would not expect widespread deep cuts in rental rates. Submarkets with high levels of construction would be disproportionately affected, but overall the apartment industry would start from a position of relative strength, which would limit the negative effects of a recession.

In summary, we expect an economic slowdown but no steep downturn. Further, with vacancy rates well below normal, no extensive overhang in supply and solid demographic support, rental housing would be in a prime position to weather an economic storm. Despite recession worries dominating the headlines, the foundation for future apartment performance remains solid.

Ryan Davis is Director of Research and Client Services for Witten Advisors, Dallas.

A Week of Crystal Balls
While economic forecasting is never a perfect science, and the apartment industry has experienced an onslaught of new product and higher rents,...
Read More
Does the Rising 10-Year Treasury Mean Apt Sales are More Likely?
Would-be buyers hope that the 10-year treasury’s recent surge above 3 percent could signal a change in the market.Last week the 10-year U....
Read More
Six Months In, Has There Been a Trump Impact?
If you do not believe political sentiment impacts real estate decisions, you should talk to Camden Chairman and CEO Ric Campo. In late 2015,...
Read More
Will Apartments Be Worth More in 2018?
Executives expect apartments to maintain their value into the year ahead, but at a certain point cap rates will go up.Since 2012, apartment cap...
Read More
How Apartment Executives are Preparing for the Next Recession
Ten years ago, the Great Recession walloped almost every sector of the economy. According to the U.S. National Bureau of Economic Research, which...
Read More