Urban vs. Suburban: Where Rents Have Greatest Disparity

In the country’s largest apartment markets, living downtown is, on average, 28 percent more expensive than living outside it. Though it has been widely understood that urban living is pricier than suburban living, the premium that downtown living commands range widely.

Called the central business district (CBD) for good reason, downtowns often house the market’s job center. And, increasingly, downtowns are becoming culturally significant submarkets as well. These trends translate to higher premiums in some markets more than others. 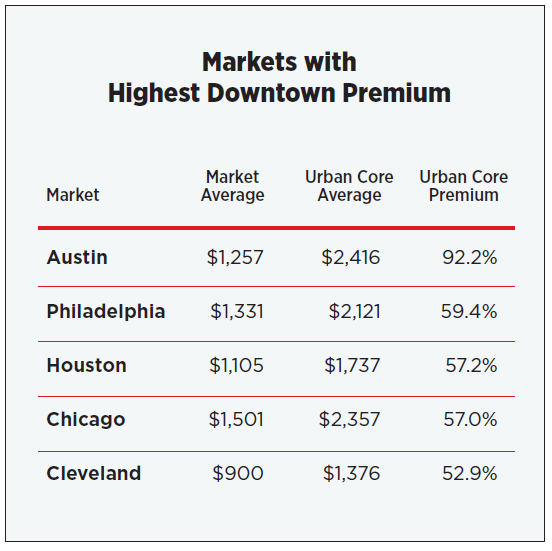 Austin serves as the prime example of this trend: It costs nearly double to live in the Downtown/University submarket than it does to live in the rest of the metro.

Like many other maturing markets across the nation, downtown Austin’s allure has solidified during this real estate cycle as the urban core has added more live, work and play options.

Even as early as 2005, living downtown was about 60 percent more expensive than everywhere else in Austin, on average. Yet, that spread peaked in early 2012 as downtown rents were on average 119 percent more expensive than the rest of the market. Today, to live in the Downtown/University submarket, which is more than 22,000 units, it will cost just shy of double the market average of $1,257 per month in Q1 2019.

Being the economic and cultural center of the metro makes downtown Austin a highly desirable area in which to live – especially considering that accessing the area from other parts of the metro can be cumbersome. With only one primary route into the area – Interstate 35 – commute times in Austin are long and increasing due to overcrowded road infrastructure. The average one-way commute time in Austin is about 25 minutes, according to the Census Bureau. Living close enough to a job center to negate a car commute commands a premium.

Some of the advantages Austin’s downtown enjoys are present – but to a lesser degree – in Philadelphia, Houston, Chicago and Cleveland, where urban cores also have serious pricing power over the rest of the market.

Three Apartment Markets Are Best Positioned to Handle Amazon HQ2
While any location Amazon chooses will need to add housing, some markets are better equipped than other for the influx of new workers.Any location...
Read More
Top Jobs in Top Urban Submarkets
Five of the top six submarkets for new apartment supply this year are classified as urban, and a majority of their residents have white-collar...
Read More
More Apartment Developments Built in Suburbs Than Urban Core
Although they lack some of the walkability and density of the urban-core markets popular among younger renters, suburban town center developmen...
Read More
The Transformation of Parking
Multiple factors are converging to disrupt everything we know about parking: Its physical structure, format, design, cost and, perhaps most important,...
Read More
Renters Have Shorter Commutes Than Homeowners
Theres a new reason to rent: It may shave off time you spend commuting to work. The daily grind of traveling to a job takes the average America...
Read More