Happy owners are those whose management companies keep an eye on water conservation.

Happy maintenance technicians are those who receive clear communications about the water supply goals and policies at their communities.

“Inconsistent water flow performance can be very concerning for residents,” he says. “Residents who recognize any change to their overall experience (such as when they shower) can cause problems. So, if a thoughtful selection of the aerator doesn’t occur, residents absolutely will complain: “NOW I’VE GOT TO RUN AROUND IN MY TUB JUST TO GET WET!”

Rhodes says there are showerhead aerators (some can be quite expensive) that do a great job of both restricting flow while still delivering a great shower. In general, aerators are priced on the “you get what you pay for” scale, he says. “However, that doesn’t necessarily translate into: The more expensive, the better. But it frequently translates into: The cheaper it is, the sooner the maintenance tech will need to replace it.”

After a quick online search, Rhodes found aerators priced at $3.30 and $4.29, both made of plastic. “These will clog very easily,” he says.

He also found a two-pack of metal aerators priced at $6.40. He says they are ideal because they are small and have all-metal construction, which helps with durability, and have a 1.75 gallons per minute rating, so it saves a lot of water, but they will create a drastic change for the residents.

“The aerator creates a ‘fog’ of water instead of steady streams,” Rhodes says, so residents who have long hair will have problems rinsing out soap and conditioner.

Rhodes says replacing aerators as part of routine preventive maintenance—such as every 24 months—is not a bad idea, but it’s not something most onsite teams typically do. A low-flow aerator’s life expectancy depends on the source water and the amount of debris in the water, Rhodes says.

“In locations such as Phoenix, which has a high calcium content, the calcium will cause scaling in the water heater that can create clogs at the aerator or showerhead,” he says. “Debris from nearby construction sites doesn’t help the cause.”

He says that when technicians hear complaints from the residents, “some will simply remove the aerator, therefore defeating the device’s ability to meter the water. Generally, once the aerator is installed, there is no need to decrease the water flow or perform preventive maintenance tasks on it unless it becomes clogged and the resident calls in.”

Some residents are known to manage their own water flow by either removing or replacing the aerator themselves.

Rhodes says that move-outs are the ideal time for the maintenance team to standardize the showerhead by checking that the aerator is the same that every other unit should have. “Some properties even use locking heads to prevent changes by the resident,” he says. “Residents don’t really mess with faucet aerators very much.”

In the owners’ minds, Rhodes says some lenders provide “green” loans, contingent on the communities’ sustainability and conservation efforts to hit certain benchmarks.

“Sometimes this is not communicated well to the onsite maintenance associates,” Rhodes says. “And in many of these cases where communities are super sensitive about conservation efforts, the resident experience is affected, which translates to an increase in complaints to the office and maintenance teams, which creates friction between onsite and corporate concerns and potential resident turnover. So, establishing a clear understanding among all onsite staff is important.” 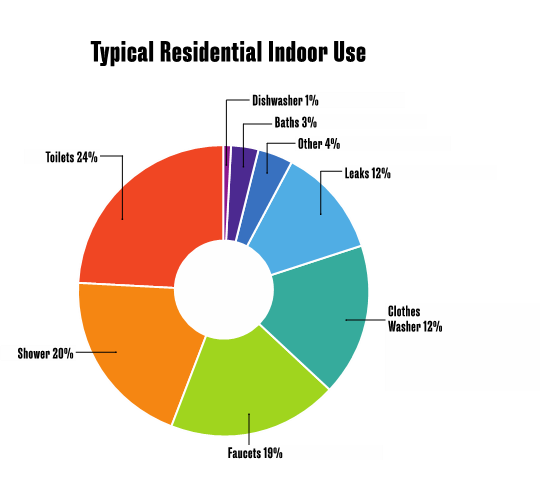 “A calibrated toilet will decrease water flow without affecting the resident experience,” he says. “Make sure the ones you install are using the prescribed rated water quantity. If possible, consider replacing toilets using 1.28 gallons per flush to those that use .78 gallons.
You can use this testing resource.

A Secret Weapon Helps Secure New Boiler for Boston Area Property
When the application for funding to help replace the boiler at Julia Martin House stalled, the Jamaica Plain Neighborhood Development Corporation...
Read More
Marketing Sustainability at Apartments
Going green attracts residents, can push rentsHolly McQueen has a soft spot for water. As Vice President and Regional Property Manager in Jacksonville,...
Read More
High Impact Details That Maximize NOI
The revenue management program has been implemented. The maintenance team is turning apartments efficiently. Low-flow showers and toilets have...
Read More
Converting Your Pool to a Salt System
A salt water system or “salt water chlorine generator” is used to replace liquid or pellet chlorine with chlorine produced from salt in the water....
Read More
Preventive Maintenance for the Holidays
We are getting close to the holidays, which means guests, cooking and possible emergency calls to you from residents on Thanksgiving Day about...
Read More