Both the national average asking rent and effective rent, which nets out property manager concessions, increased 0.5 percent in the fourth quarter. At $1,498 per unit (asking) and $1,426 per unit (effective), the average rents have increased 3.7 percent and 3.8 percent, respectively, from the fourth quarter of 2018. This was the lowest annual growth rate in more than two years.

Vacancy increased in 35 of 79 metros in the quarter after rising in only 23 metros the previous quarter. Occupancy growth was strong in a few metros, particularly in Florida and California. For the year, 23 metros have higher vacancy, and only one (New Haven) shows a decline in rent. Those with the highest vacancy rate increase include Fairfield county, Charlotte, Greensboro/Winston-Salem, New Haven and Dallas. Metros that saw the biggest decline in vacancy include Fort Lauderdale, Jacksonville, Washington D.C., Oakland, and San Bernardino/Riverside.

The metro-level rent growth picture was mixed. Fourteen metros saw an increase in effective rent of 1.0 percent or more, led by Charleston, Chattanooga, Tucson, Pittsburgh and Phoenix—all of which had rent growth of 1.3 percent to 1.9 percent in the fourth quarter. Four metros posted an effective rent decline in the quarter, including Fairfield County, New Haven, Richmond and Northern New Jersey. 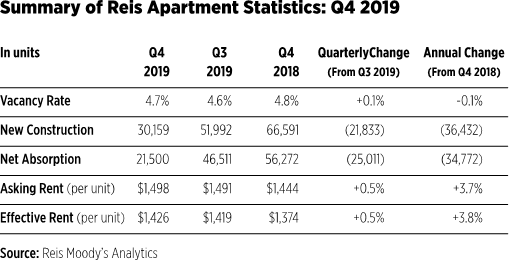 2017 Apartment Performance: A Year of Moderate Growth
Looking back on 2017, the apartment market grew moderately even with the addition of a large amount of new supply. Even the best-performing metro...
Read More
Winter 2019: Strong Fundamentals Close Out the Year
U.S. Apartment MarketThe apartment market ended the year on solid territory, with absorption outpacing new supply and occupancy rates up 40 basis...
Read More
RealPage and Reis: Market Improves in Q2
In dueling reports, last week, Both Reis and MPF painted a picture of an apartment market that improved in the second quarter. The average...
Read More
Rents Grow 3 Percent in 2019
On the metro level, rent gains have been fairly distributed. Of the top 30 metros in our ranking, 21 saw rents increase by 2.6 percent or more,...
Read More
Fall 2018: Demand for Apartments Remains Steady
U.S. Apartment MarketAfter a string of quarters of slowing national rent growth, third-quarter results showed a slight uptick in performance....
Read More