Spacious apartment living will never go out of style, but micro units are definitely having a moment. A 55-unit apartment community with apartments no larger than 360 square feet recently opened in New York City.

Efficient design is key to micro unit appeal. At Arris, a new apartment community in the booming Yards neighborhood of Washington, D.C., the seven micro units come fully furnished with multifunctional furniture to help ensure they live bigger than their small square footage.

While in New York City for a meeting with the design architect for Arris in 2012, Jason Bonnet, Vice President of Development at Forest City Washington, went to the City Museum of New York. He wasn’t in tourist mode, however. The museum had an exhibit featuring micro apartment design, and Bonnet wanted to check out the prototype of a fully furnished micro apartment by Resource Furniture, which manufactures a large line of multifunctional, transforming furniture.

Instead of making a 385-square-foot space at the Arris into a somewhat awkward den addition to a stack of one-bedroom units, Forest City decided to turn the space into a stack of micro units. This was the company’s first foray into micro apartment design.

Bonnet was impressed with the exhibit, and he started working with the furniture company on the design of Arris’ micro units. “What we learned through the micro unit process helped us make more efficient decisions throughout all our unit designs,” Bonnet says.

In a bid to capture the contractor/consultant short-term renter population that constantly flows in and out of the nation’s capital, Forest City decided to fully furnish the micro apartments. The Washington Navy Yard, Navy’s administrative offices and the headquarters of the U.S. Department of Transportation are just blocks away from the apartment community.

After working with the furniture company on the space-saving design, Bonnet decided to stick with the company for the furnishings. “There was an option to have the general contractor bring in a carpenter who could do the mill work for the built-in furniture,” Bonnet says, but he knew that other developers who had gone that route hadn’t been happy with the results. The furniture company offered a five-year warranty on the mechanisms and a two-year warranty on the finishes.

Outfitting each micro apartment with the furniture cost about $22,000. The micro units rent for $2,140 to $2,215 per month, and each comes with the following: 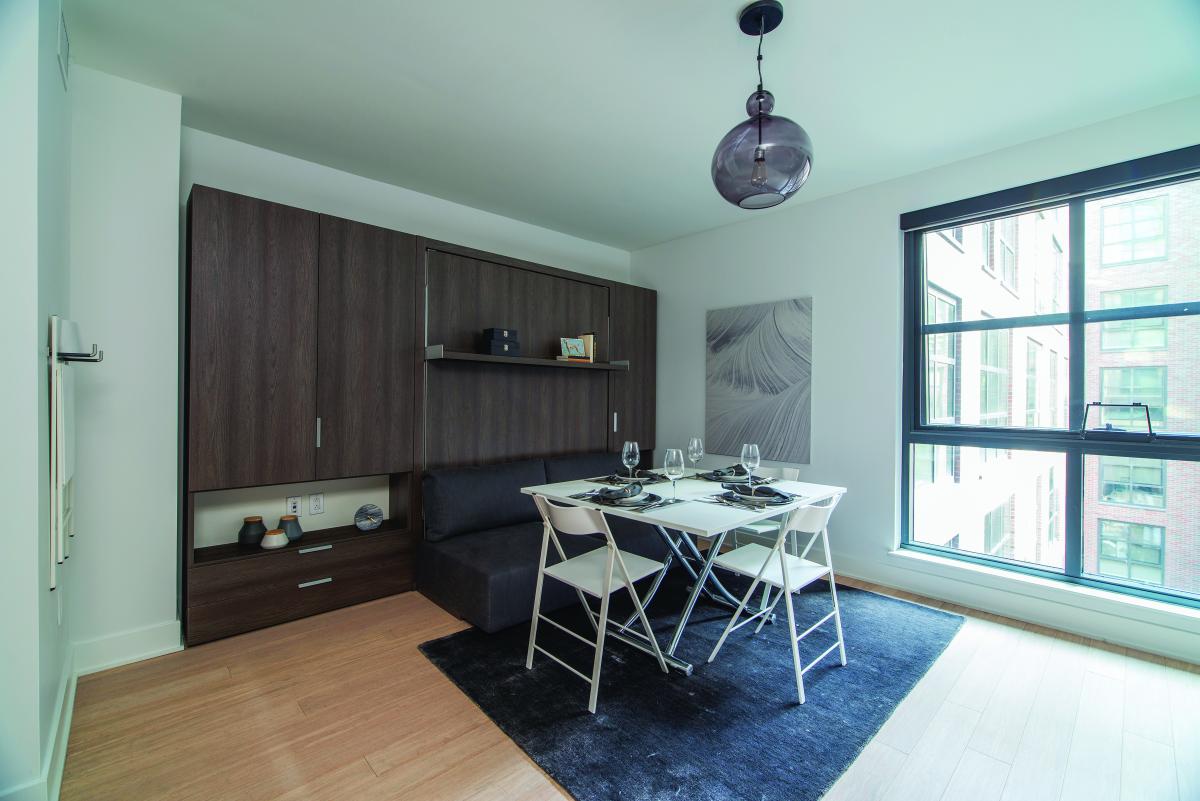 The 327-unit Arris opened on April 1, 2016, and by December 2016 four of the seven micro units had been leased, and two had turned over already.

One of the units currently serves as a model and is a standard stop on the property tour. Most potential residents remark that it seems much larger than its 385 square feet. As the units turn, Bonnet plans to capture resident feedback to help the company make any future micro-unit design decisions.

Forest City doesn’t currently have concrete plans to build more micro units, but it’s now a viable possibility, Bonnet says. “We have millions of square feet entitled and ready to design in other markets, like San Francisco, Los Angeles, New York and Jersey City, where this is a consideration,” he says. “When we do tours with executives who come in from our headquarters in Cleveland or other regional markets, they love walking through here.”

At the end of 2016, the Arris was 77 percent occupied, and a micro unit marketing push—including a video showing how the apartment transforms into its various living modes—is scheduled for early 2017. 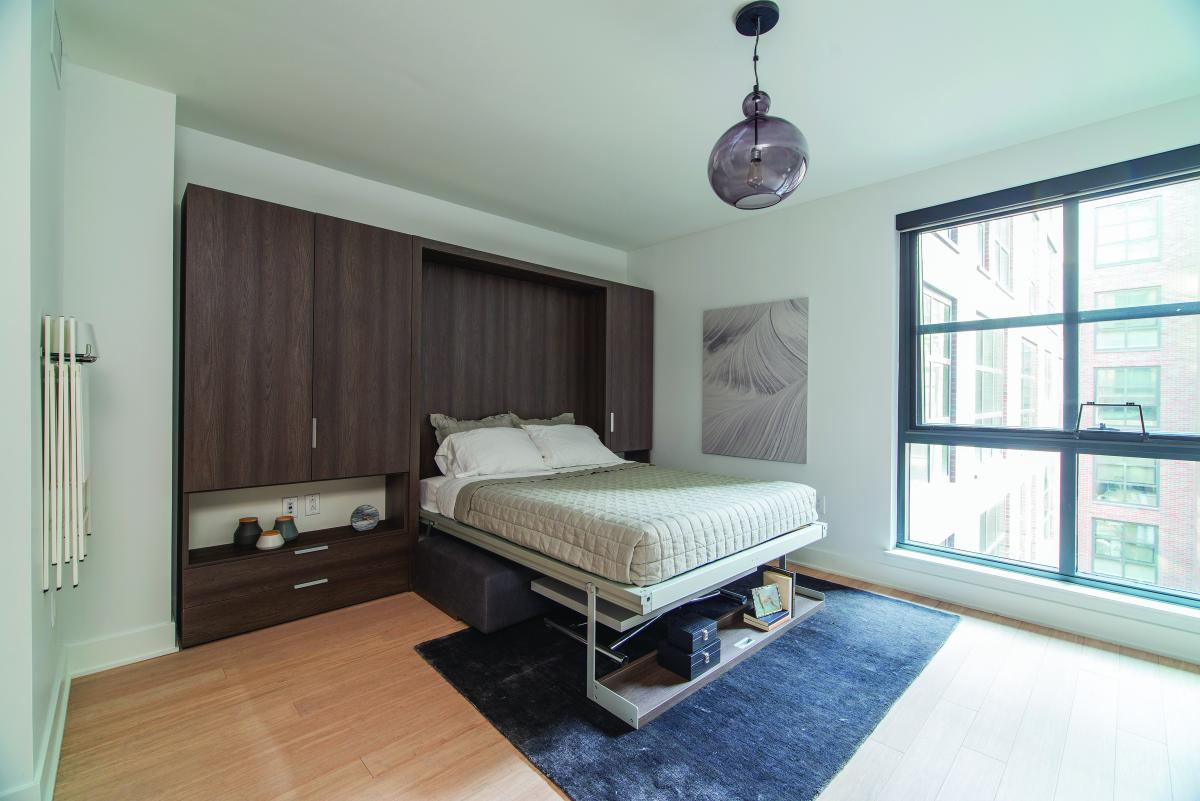 “Since we are so close to stabilizing, we can get specific with marketing our micro units,” Bonnet says. “In the beginning, we wanted to make sure that enough people in the market saw it.”

It’s a challenge to lease these smaller spaces when you show the apartment empty, says Bill Swets, CORT.

“People who rent these micro-units typically are young professionals who are seeing flexibility in their lifestyle. They do not want to have to be responsible for dragging around a bunch of their own furniture from place to place. We are working with developers on providing furniture that fits with what is already built into the unit.”

Gayle Bennett is a freelance reporter.

Millennials Guide Trend on Tiny High-Tech Apartments
Millennials place a higher priority on location than square footage. In cities like New York City, San Francisco and Seattle, micro apartments...
Read More
Large, New Co-Living Community Coming to NYC
A co-living community is coming to the New York City borough of Queens, and the developer says it will be the largest purpose-built co-living...
Read More
This Man Lives With His Five Children in a 1,050-Foot Apartment
A Vancouver man with five children ages 5 to 10 manages to live in a 1,050 square foot apartment. Adrian Crook, 41, a videogame design consultant,...
Read More
Up for Downsizing? Smart Solutions for Smaller Apartments
Fast-rising home prices and higher mortgage rates have made it cheaper for individuals to opt for apartment living versus home buying. In today's...
Read More
Robotic Furniture Being Tested in Boston Apartments
Making the most efficient use of space has been the goal of studio apartment dwellers since, well, the dawn of the studio apartment. Robotic...
Read More