Apartment Completions Set to Spike in 2020

After five years of elevated delivery volumes, the U.S. apartment market is scheduled to see completions hit an all-time high in 2020, reports RealPage.

The nation has seen crowning delivery volumes throughout much of the past five years. In the past 12 months, roughly 285,000 new apartments were completed across the nation’s 150 largest apartment markets. Though that volume was at a three-year low, down from a previous high point in 2017, deliveries remained sizable compared to long-term norms.

Moving forward, apartment completions are expected to reach historic peaks. More than 526,000 units are under construction across the U.S., and more than 359,000 of those units will deliver within the next 12 months.

Of the nation’s 50 largest apartment markets, 33 will see more new supply during the coming 12 months than was delivered over the previous year. Though some of those markets such as Memphis and Virginia Beach will see marginally more new supply by unit count, others will see a considerable difference. The number of markets seeing aggressive levels of new inventory has been increasing throughout this economic cycle.

Markets expected to log the most year-over-year increase in new supply include Houston, Oakland and Los Angeles, which are all scheduled to see completion volumes swell by more than 5,000 units in the coming year. 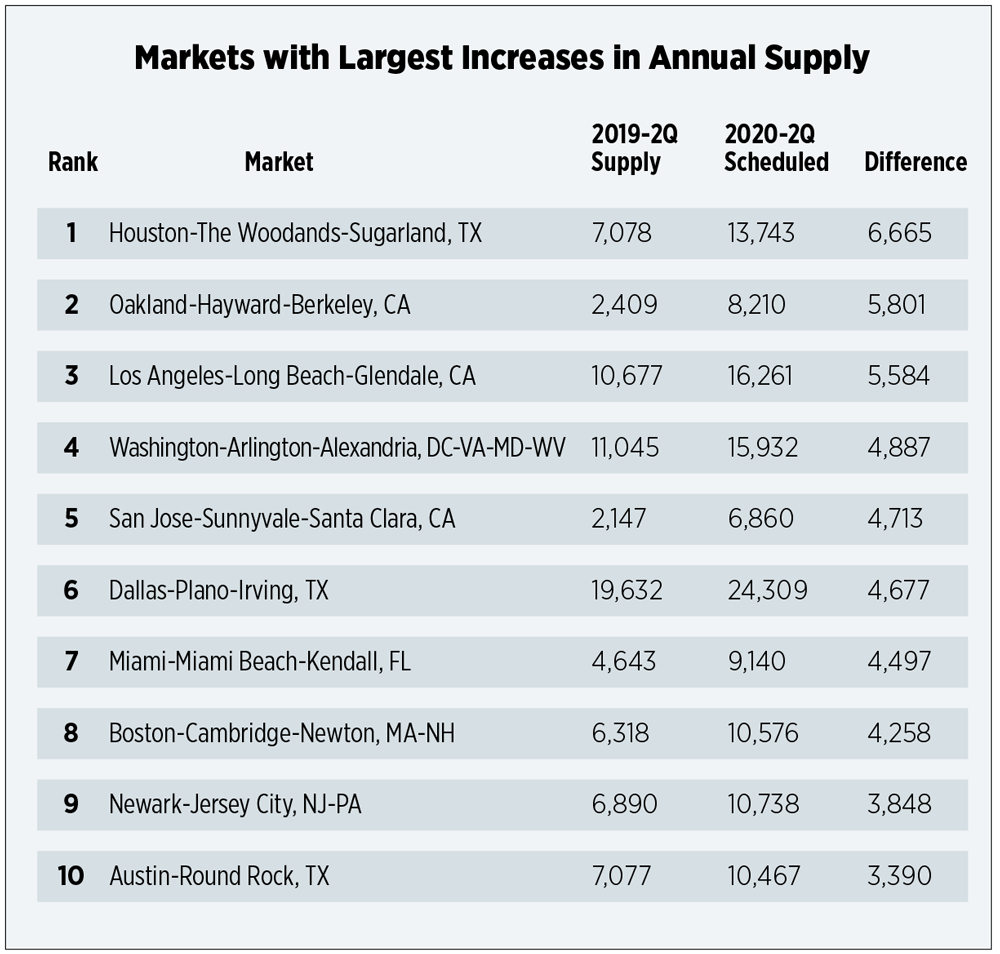 Just Wait: Analyst Estimates Peak of 2017 Apartment Supply
The guessing-game for 2017 apartment development no longer focuses on the number of new apartment homes, but rather when during the year the...
Read More
Rents and Occupancy Stabilize Thanks to Fewer Deliveries and Tight Housing Market
Although the national apartment market was stagnant during the end of 2016 and beginning of 2017, market fundamentals improved during the second...
Read More
Rental Housing Construction Faces Multiple Pressures
The final effects of intensifying trade wars are yet to be measurable, but other dynamic changes are causing the rental housing industry to face...
Read More
The Value of Finding the Right Rehab Partner
When it is important to quickly complete a renovation, accurate quotes and on-time delivery are important.Mia Lancaster knows that when it comes...
Read More
The Universities with the Most Supply Coming Online
The list of schools with the most supply coming online includes a surprise in the top spot.Student housing developers are set to deliver as many...
Read More