What Residents Would Pay to Upgrade Their Location

With job growth in and near downtown areas reaching new highs, RentCafe wanted to explore what percentage of renters are satisfied with the location they live in and how much they are willing to pay extra per month for a location upgrade.

According to its latest study, accrued by Yardi, 83 percent of residents live in less-than-ideal locations. Moreover, 60 percent are not able to pay anything more than the actual rent or a maximum of $100 more to live in their preferred location. 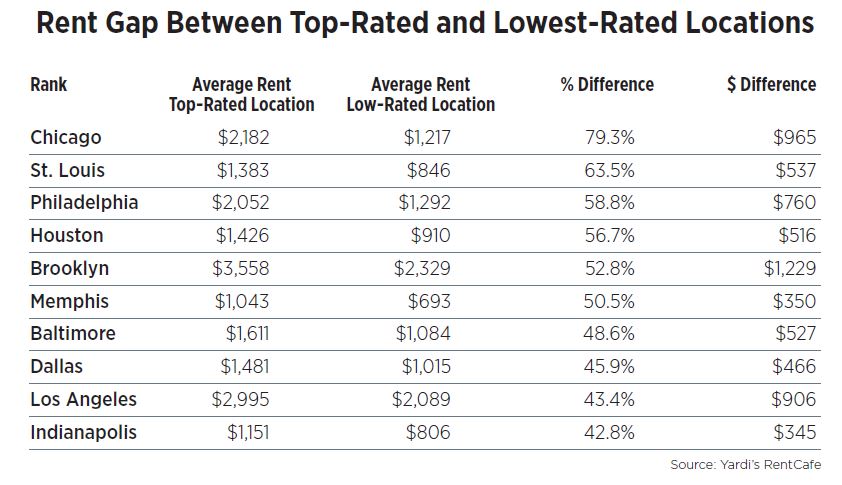 A location upgrade is four times more expensive than what most renters can afford. The national average rent charged in top-rated locations is $1,655. That’s 37 percent more than the average national rent of $1,211 charged in lower-rated locations and a difference of $444 in the monthly rate.

San Diego Apartment Market Is Getting Stronger
May ushered in great news for the San Diego apartment market: The average rent in the metro area has reached a new high of $1,915. Thats $12...
Read More
Number of Cost-Burdened Renters Decreasing Nationally
As incomes have continued to climb, the percentage of apartment residents who were cost-burdened—paying rent that is 30 percent or more of the...
Read More
Low-Income Renters Face High Energy Burdens
If youre black, Latino or low-income or you live in a multifamily dwelling or rent your property, youre more likely to spend a greater sha...
Read More
U.S. Resident Retention Rate Matches All-Time High
When initial apartment leases came up for renewal across the country’s 50 largest markets in 2018, 52.5 percent of apartment renter househol...
Read More
IES: Owners & Employees Feeling the Fray of Labor Constraints
Following a year of moderate growth and solid fundamentals in 2018, the first six months of 2019 make that past year seem like a lull for the...
Read More