Southern and Mountain West States Are Hotbeds for Apartment Demand

The latest population figures from the U.S. Census Bureau show that nearly 38 percent of U.S. residents live in the South, with another 24 percent calling Western states home. These patterns of domestic migration are expected to continue well into the future, according to research conducted by Hoyt Advisory Services for the NAA and NMHC.

The top 10 states for apartment growth (based on percentage increase) will need 2.4 million new apartments from now through 2030. What do all of these states have in common? They are relatively low-cost and/or business-friendly. In fact, job growth in most of these states has surpassed the U.S. average since the Great Recession, even if some of them were slow to recover initially. 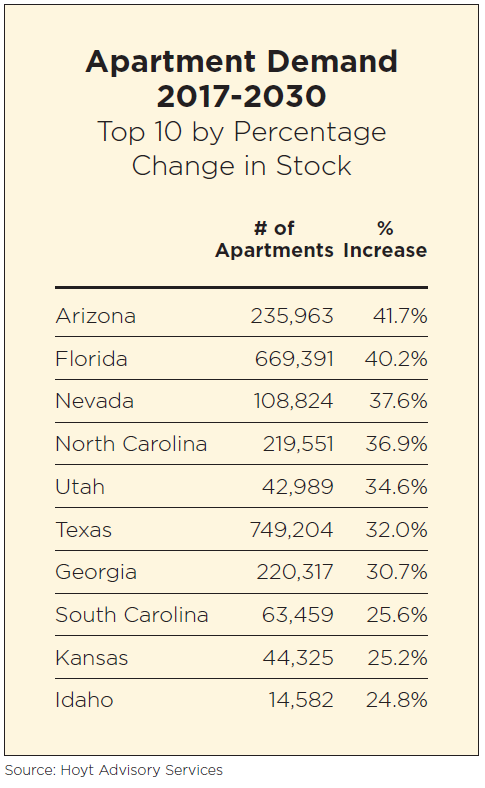 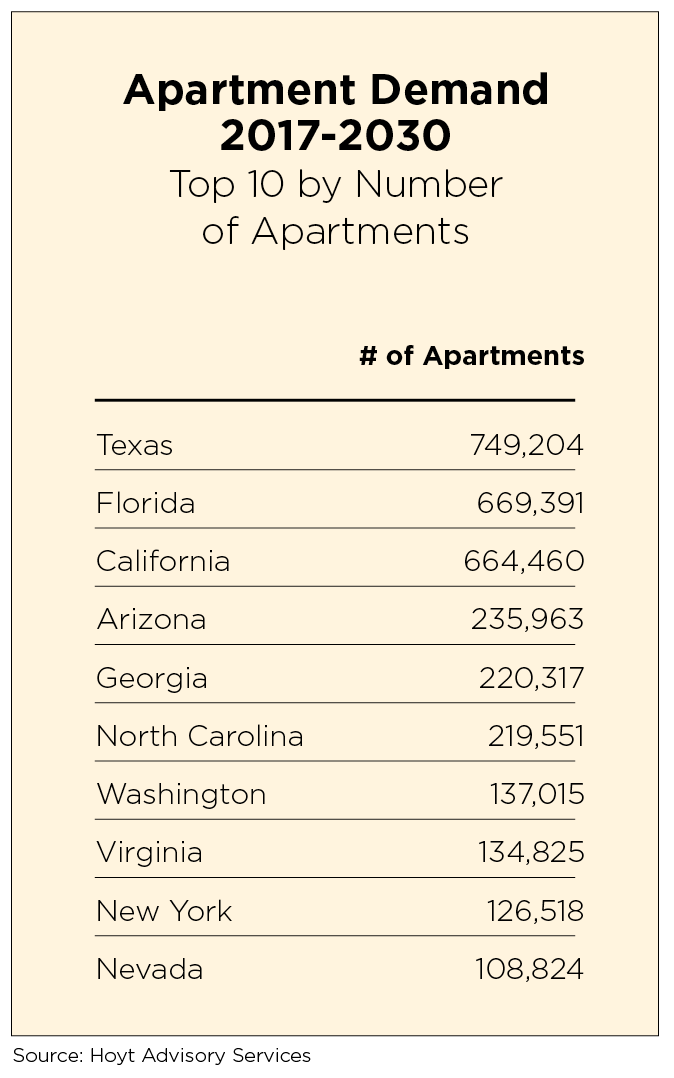 Utah’s growth was nearly double that of the nation’s at 22.3 percent. Economic drivers have come from a wide variety of industries, including a burgeoning tech sector luring workers from across the country, as well as construction and professional/business services.

Florida, Nevada and Texas all witnessed cumulative job gains in the high teens. Texas, with its penchant for drawing major corporate relocations, was driven by the professional/business services sector. Florida and Nevada, both tourism magnets, also saw strong growth in the services sector as well as construction. 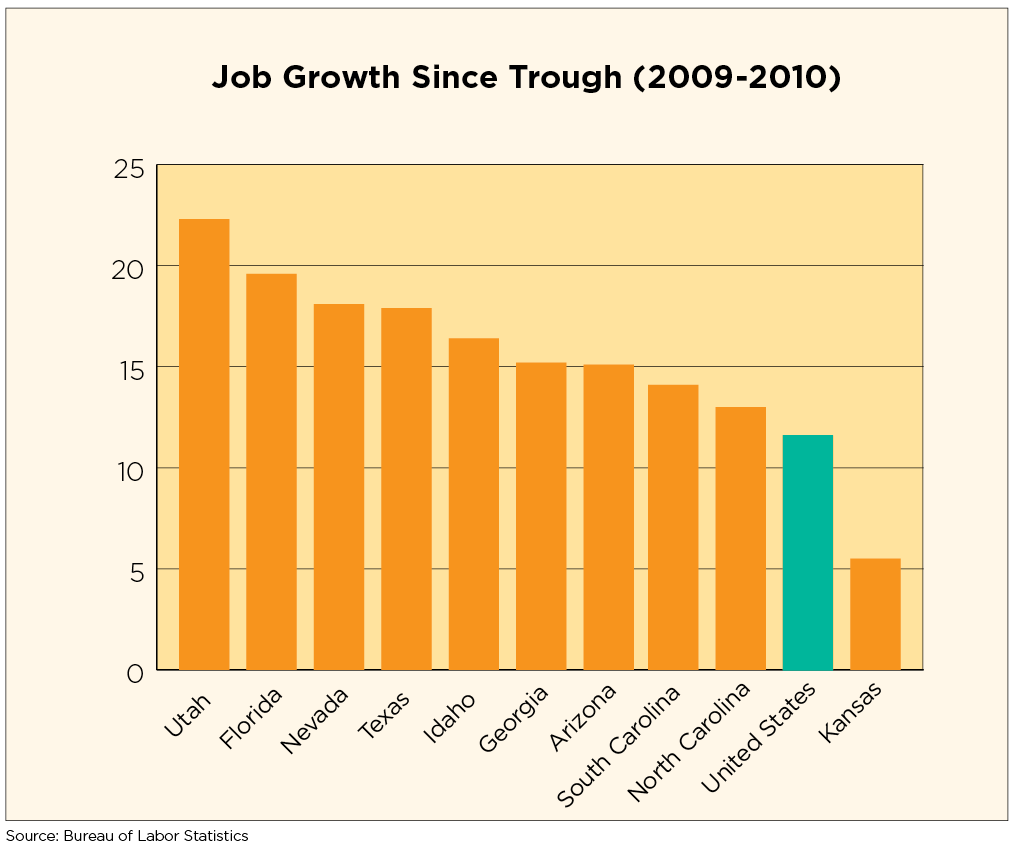 Looking at sheer numbers of units, Texas, Florida and California will each need more than a half-million apartments during the next 13-plus years—of all types and at all price points.

But what should all these apartments look like? Breaking the population down by age cohort certainly helps answer that question, bearing in mind that this forecast includes both renters and owners. The 65-plus age cohort will be responsible for over a third of population growth in each of the top 10 states for apartment demand, with Virginia, California and New York expecting the most significant growth from the senior population. While some research suggests that older apartment dwellers tend to seek out larger units with plenty of amenities, it’s impossible to generalize a group this large and geographically dispersed. Bottom line? A broad range of apartment mixes and amenities is needed to suit the diverse and multi-generational apartment communities across the country. 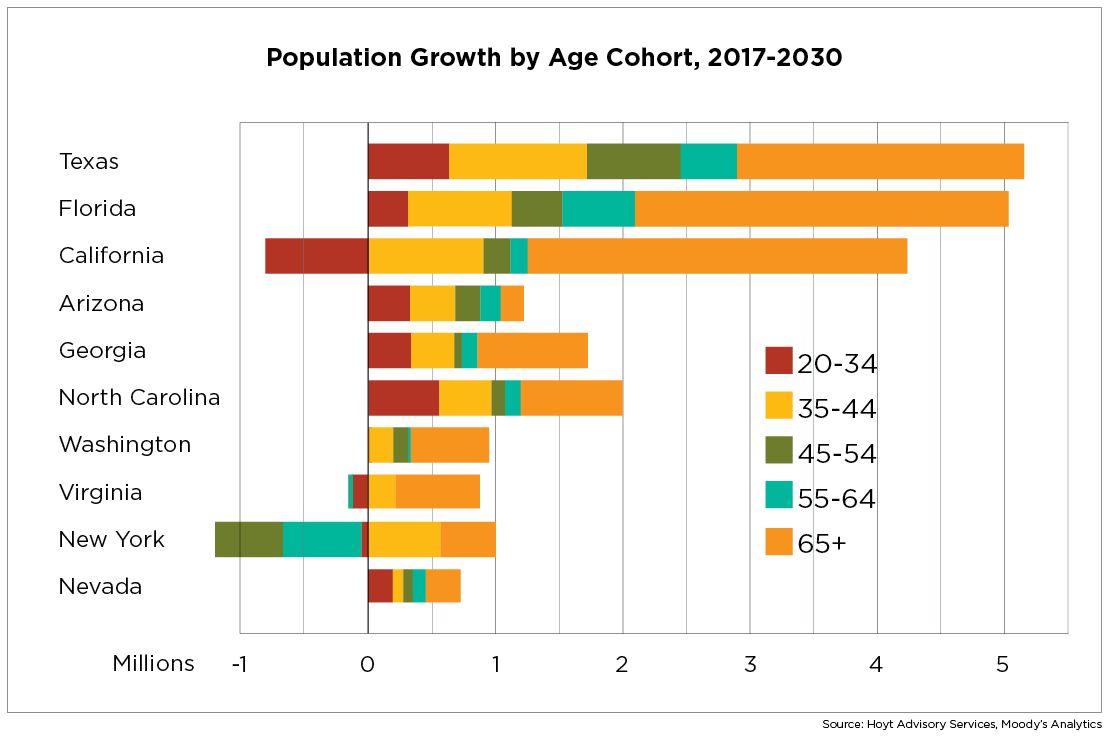 Southern and Mountain West States Are Hotbeds for Apartment Demand
A deeper dive into the July demand research product, the top states for projected apartment demand tend to be lower-cost, business-friendly Southern...
Read More
U.S. Needs 4.6M New Apartments by 2030 to Keep Pace with Demand
Growing Demand is Due to Aging Population, Immigration, Declining Home Purchases WASHINGTON, D.C., June 12, 2017 – Delayed marriages, an agi...
Read More
United States Needs 4.6 Million New Apartments By 2030 or It Will Face A Serious Shortage
To meet growing demand, America needs to build at least 4.6 million new apartment homes at all price points by 2030. In addition, as many as...
Read More
Apartment Industry & Its Residents Contribute $3.4 Trillion to the National Economy
WASHINGTON, D.C. – A new Hoyt Advisory Study commissioned by the National Apartment Association (NAA) and National Multifamily Housing Counc...
Read More
Cities and Suburbs and the Gray Areas in Between
Although cities experienced a resurgence of population and apartment demand growth immediately following the recession, suburbs have regained...
Read More