The Trump Administration released its principles for tax reform on April 26 calling for “the biggest tax cut and the largest tax reform in the history of our country.” The plan now joins the House Republican Tax Blueprint released last June on the table for consideration. 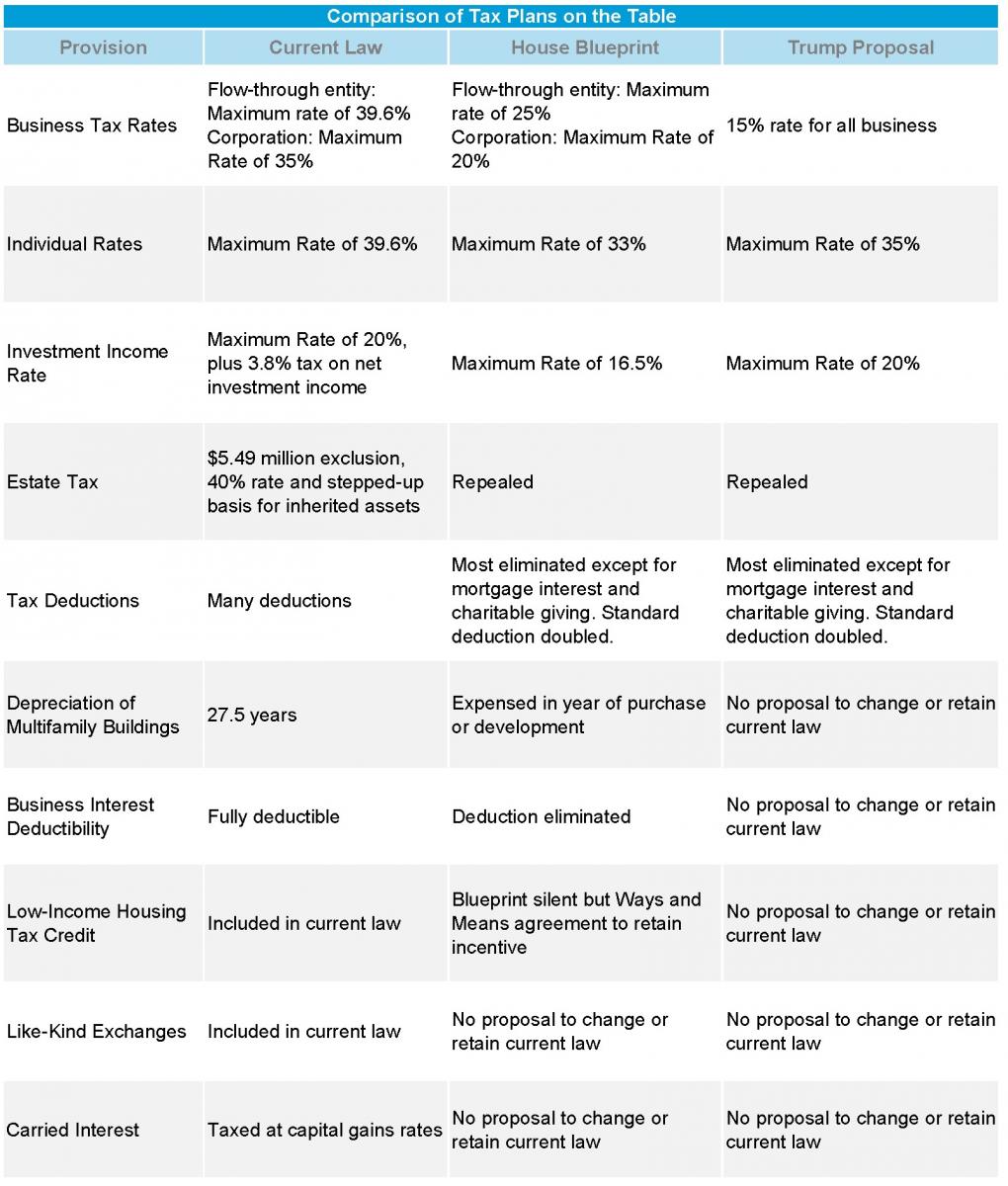 The key elements of the Trump tax plan that would impact apartment owners, developers and managers are outlined below:

The timing for tax reform remains fluid. The original goal of reform by the August recess has been changed to be reform by the end of this year. The Trump Administration said it plans to meet with House and Senate tax writers throughout May to develop a plan that Congress can approve.

House and Senate leadership issued joint statement saying, in part, “The principles outlined by the Trump Administration today will serve as critical guideposts for Congress and the Administration as we work together to overhaul the American tax system and ensure middle-class families and job creators are better positioned for the 21st century economy.”

In the weeks ahead, the apartment housing industry will continue to work with the Trump Administration and Congress to advocate for tax reform that promotes economic growth and investment in rental housing without unfairly burdening apartment owners and renters relative to other asset classes.

NAA/NMHC have also engaged Capitol Tax Partners, one of Washington’s premier tax lobbying firms, to complement our efforts. Capitol Tax Partners is a unique firm in that it not only has significant relationships among policymakers, but firm principals also have deep knowledge about the tax code. Specifically, we will advocate for a bill that:

Tax Reform Blueprint: The Good, the Trade-Offs and the Bad News on LIHTC
House Republicans released their tax reform blueprint on June 24, which has significant implications for owners, operators and developers of...
Read More
Washington Update - January 2017
Tax reform is front and center on the congressional agenda, and there is a real chance it will become law this year. The last comprehensive tax...
Read More
What Would Tax Reform Mean for Apartments?
Tax reform is expected to take center stage in the next Congress based on signals from President-elect Donald Trump and congressional Republicans....
Read More
The Election Is Over, Now What?
On Jan. 20, Donald J. Trump will be sworn in as the 45th president of the United States. It will mark the conclusion of an unprecedented and...
Read More
Apartment Industry Makes Its Case to Senate Finance
NAA/NMHC again took the opportunity to inform the Senate Finance Committee of the apartment housing industry’s tax reform priorities. In mid-Jul...
Read More