Transit and Apartments: A Winning Combination

As more Americans than ever are using public transportation, and as companies are more willing to locate themselves in areas with diverse transportation options, the share of apartment units being developed in transit-oriented areas has more than doubled from 2012 to 2017.

The automobile has fallen out of favor in recent years thanks to increased congestion and longer commute times in fast-growing metropolitan areas across the country. Ride-sharing, ride-sourcing, car-sharing, bike-sharing and living in walkable environments are also driving consumers away from car ownership.

As the labor market becomes increasingly tight, public transit’s role in linking workers to job opportunities becomes critical. In the past, employees followed the jobs. Now, more and more companies are basing their location choices on where their prospective employees want to live. A 2014 study by the American Public Transportation Association (APTA) found that large corporations gained a competitive advantage by locating in areas with both shorter commute times and multiple modes of transportation available.

Apartment developers have certainly taken heed of this trend, choosing sites on or near public transit at increasing rates. Yardi Matrix has tagged nearly 66,000 units under construction with 2017 delivery dates as “transit-oriented” which it defines as being within a one-quarter mile radius of a public transit rail station. That’s about 21 percent of all apartment homes on the books for delivery this year – more than double the share just five years ago. 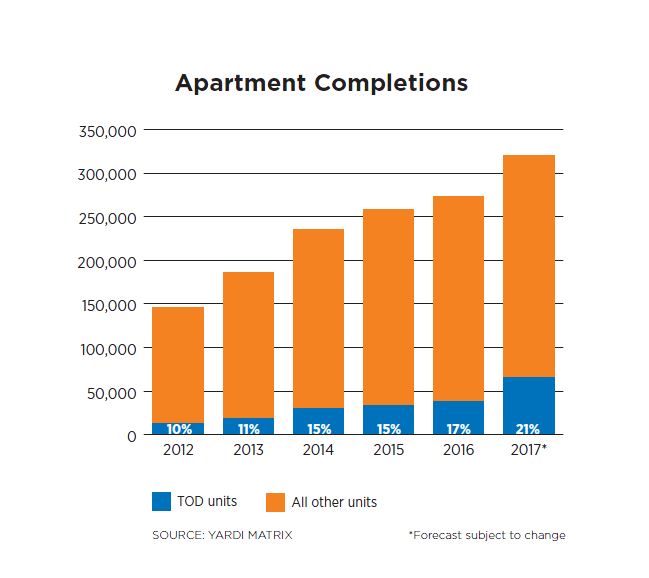 It’s important to note that large cities like New York, where public transportation is plentiful, will skew the numbers – and we all know that plenty of new construction has occurred in our largest cities. But this is not just a big-city phenomenon. Smaller apartment markets such as Sacramento, Salt Lake City and Cleveland, among others, are building transit-oriented apartments that comprise as much as one-third of the stock currently under construction.

Overall, transit ridership of all types is at its highest since 1957, according to the Federal Transit Administration, increasing 20 percent during the past decade. Although ride-sourcing services (Uber, Lyft) have grown in popularity, a recent survey from the Shared-Use Mobility Center showed that, among shared mobility users, they are the preferred mode of transport between 8 p.m. and 4 a.m., a time when many public transit systems offer few, if any, options. However, buses and trains remain the most popular option during rush hours.

In 2015, about 61 percent of public transit users commuting to work were renters. In five years’ time, 387,000 more renters used public transit to get to and from their jobs. There’s no denying that we remain a car-centric society, so removing “drive alone” from Census data reveals public transport as the fastest growing mode of transportation for renters, as shown in the pie graph below. 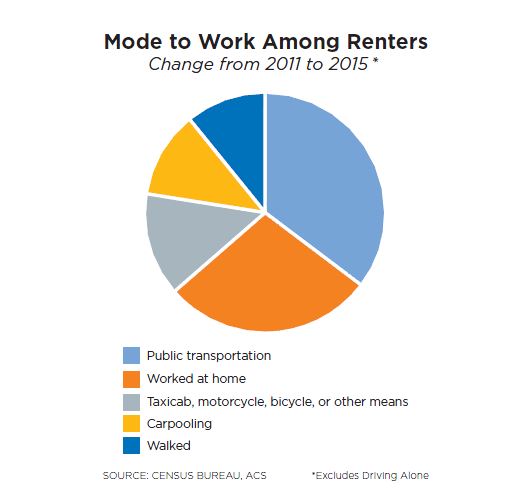 Public transit systems across the country face many challenges, including aging infrastructure, deferred maintenance and lack of funding. Public/private partnerships are emerging as just one solution to this problem. Those municipalities, transit authorities and private sector firms which understand the natural symbiosis of rental properties and public transport will be far ahead of the curve.

Will New Communities End Commuting Nightmares?
Todays city planners are developing Transit-Oriented Developments (TODs) to make their communities more easily navigable without cars. The...
Read More
The Transformation of Parking
Multiple factors are converging to disrupt everything we know about parking: Its physical structure, format, design, cost and, perhaps most important,...
Read More
Renters Have Shorter Commutes Than Homeowners
Theres a new reason to rent: It may shave off time you spend commuting to work. The daily grind of traveling to a job takes the average America...
Read More
Five Cross-Generational Development Trends
The live-work-play housing model has always had a home on college campuses. Find out how student housing developers address space and sustainability.Some...
Read More
Bringing the Leasing Office to the Prospect
Meeting over coffee or leasing in a former retail space can improve conversions.Even with the option to type to chatbots, view pictures of amenities,...
Read More