During the second quarter, the apartment industry experienced booming positive metrics across the board. Unceasing multifamily demand in conjunction with supply constraints in many markets resulted in record-setting rent growth. After a period of rent losses at the beginning of the pandemic, the national rental rate has recovered and is now well above pre-pandemic levels. According to RealPage, average monthly effective rent stood at $1,480, the highest on record since they began tracking data in 1998. Furthermore, concessions have declined as the economy and COVID-19 vaccination rates improve. According to CoStar Group, market-rate properties with 10 or more units had a concession rate of just 0.8%, a decrease of 0.6 percentage points since the peak of the pandemic. As reported by REIS, markets that have shown strong demand and increased renter migration ranked highest for rent growth. Tucson, Ariz.; San Bernardino/Riverside, Calif.; Tacoma, Wash.; Las Vegas, Phoenix and Columbia, S.C., logged the highest annual effective rent growth, increasing by 3.0% or more. Meanwhile, San Francisco, New York City and San Jose, Calif., registered rent losses over 10.0%. 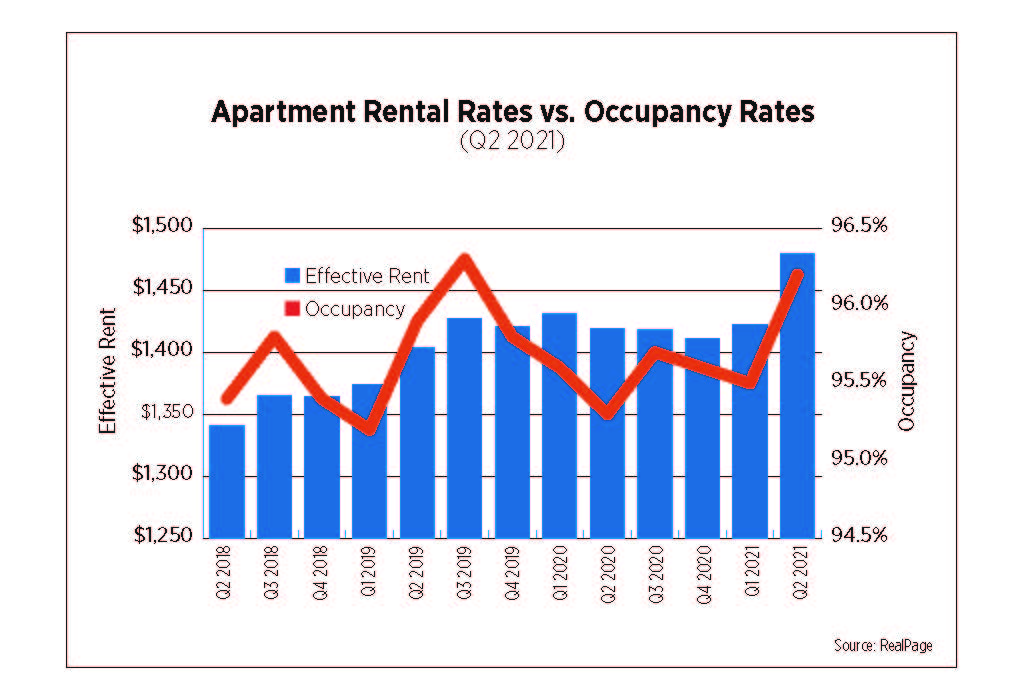 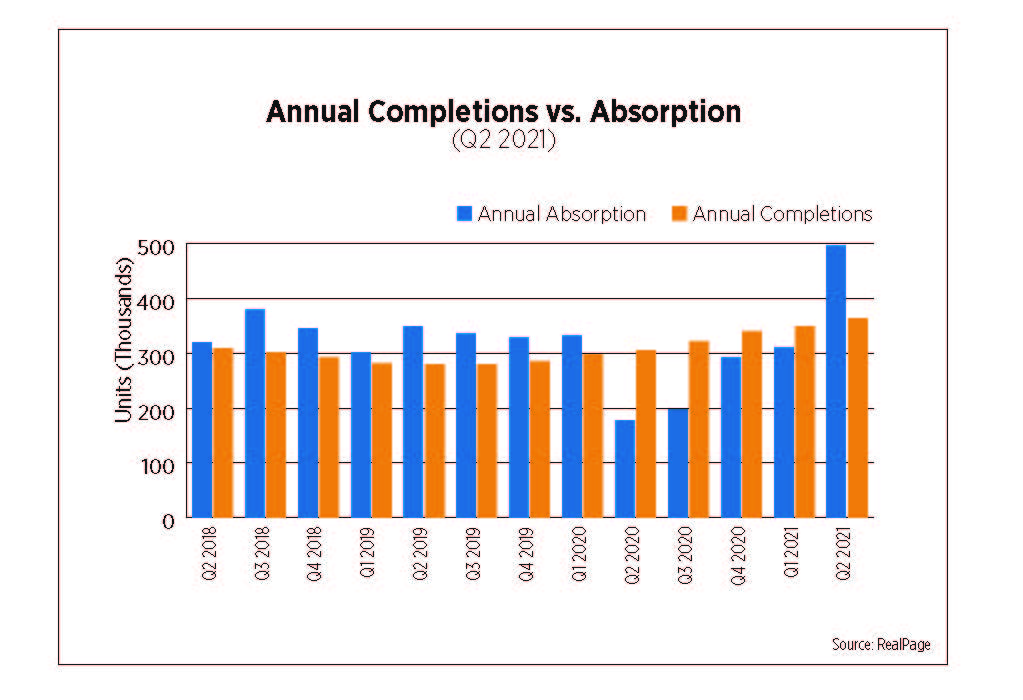 With surging demand and rent, investors have regained confidence in the apartment sector. As reported by Real Capital Analytics, closed apartment sales transactions during Q2 2021 drastically increased year over year by 221.5%, reaching a historic second quarter high of $49.4 billion. A total of 285,091 units changed hands, up by 179.0% compared to the same time last year. The average price per unit increased by 14.2% to $190,276. The average cap rate remained at 4.9%, down by 45 basis points. Investors are gravitating toward fast-growth Sun Belt markets such as Dallas, Phoenix and Atlanta, which were among the leading markets for deal volume during Q2 2021. 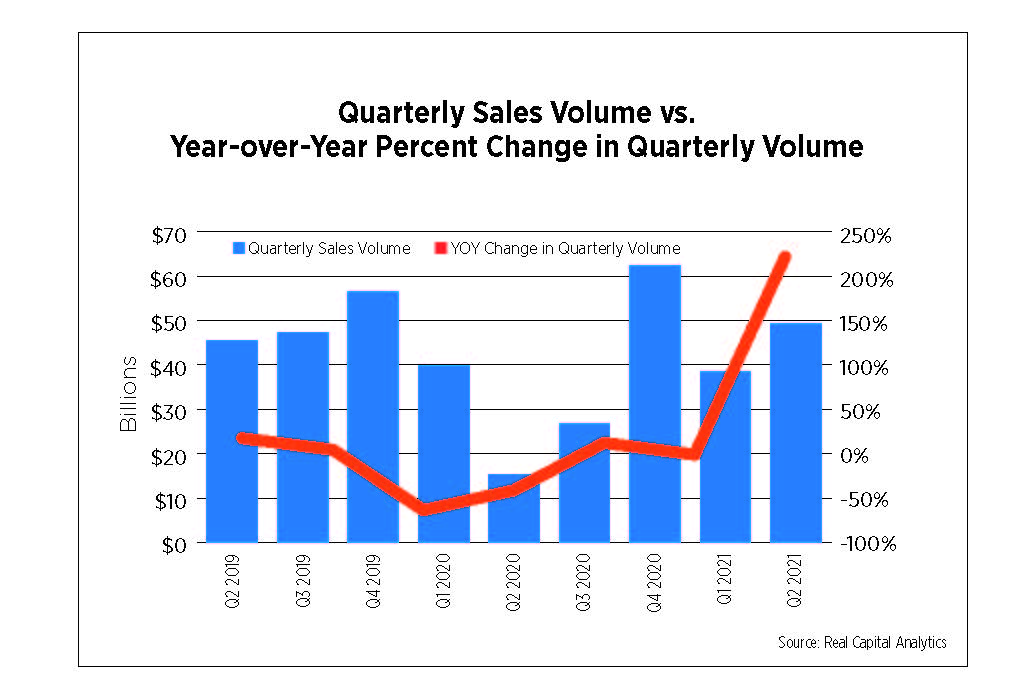 Despite fears of inflation and substantial increases in new COVID-19 cases among the unvaccinated population, the economic recovery continued into the summer. Several recent employment indicators posted positive results, although the labor market remains highly constrained. After hitting its lowest level since the pandemic began, initial claims for unemployment posted a surprising increase for the week ending July 17. However, the Bureau of Labor Statistics’ (BLS) June Employment Situation Report was strong, with 850,000 jobs added plus an upward revision of 15,000 jobs in April and May combined. The unemployment rate ticked up slightly to 5.9% but was largely because of workers reentering the labor force in search of work or workers choosing to leave their jobs.

The labor market still has 6.8 million jobs to recover or add to return to pre-pandemic levels. Only two states have exceeded their payroll levels of February 2020: Idaho and Utah. At the opposite extreme, California remained down 1.2 million jobs and New York is down 951,000 jobs as of June 2021. 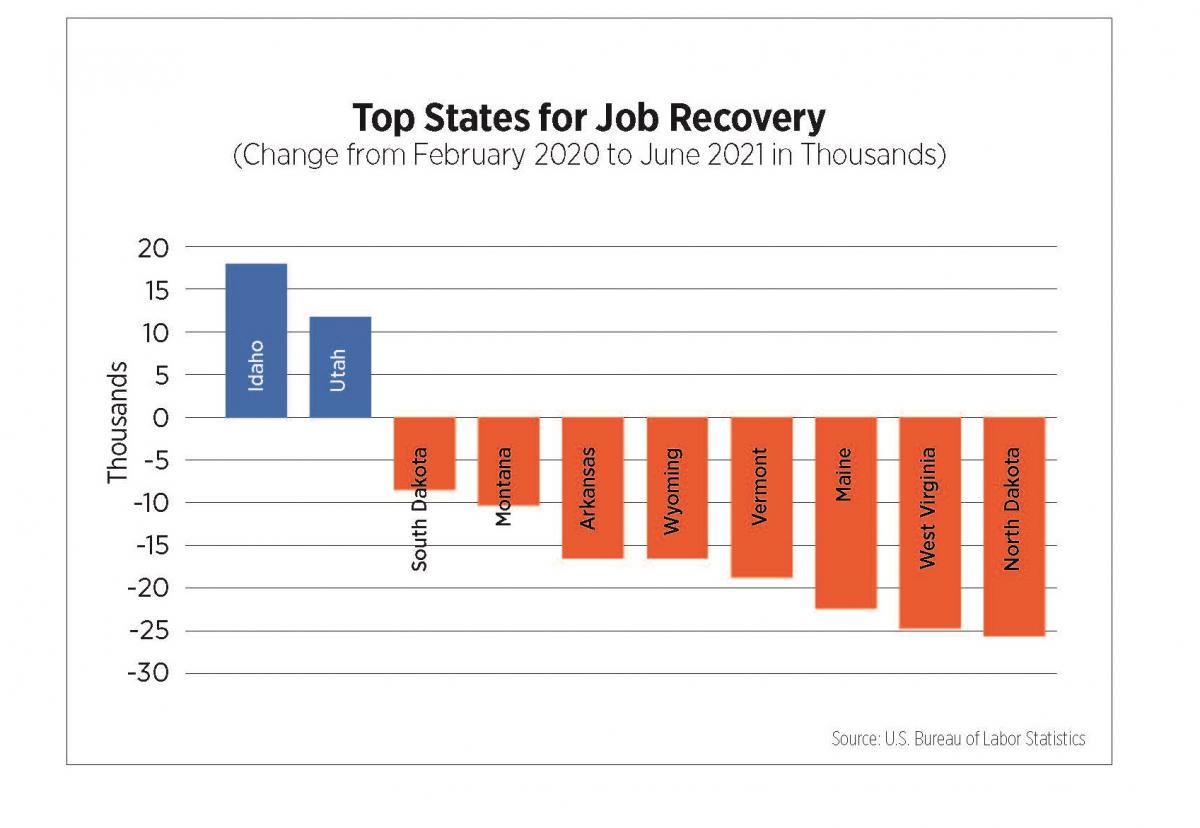 The number of job openings in May totaled 9.2 million, representing a series high since the BLS started tracking these data in 2000. The quits rate, the number of employees quitting as a percent of total employment, peaked in April at 2.8% and remained elevated in May at 2.5%, or about 3.6 million people quitting in just one month. Employees are quitting for several reasons, including family obligations, a glut of job opportunities, higher pay, more flexible work arrangements or as a result of a geographic move. Employers, in turn, continue to struggle, as evidenced by the National Federation of Independent Business’s most recent Small Business Optimism Survey, which revealed 46% of business owners had job openings that could not be filled, a slight drop from the prior month’s all-time high but more than double the 48-year historical average of 22 percent. 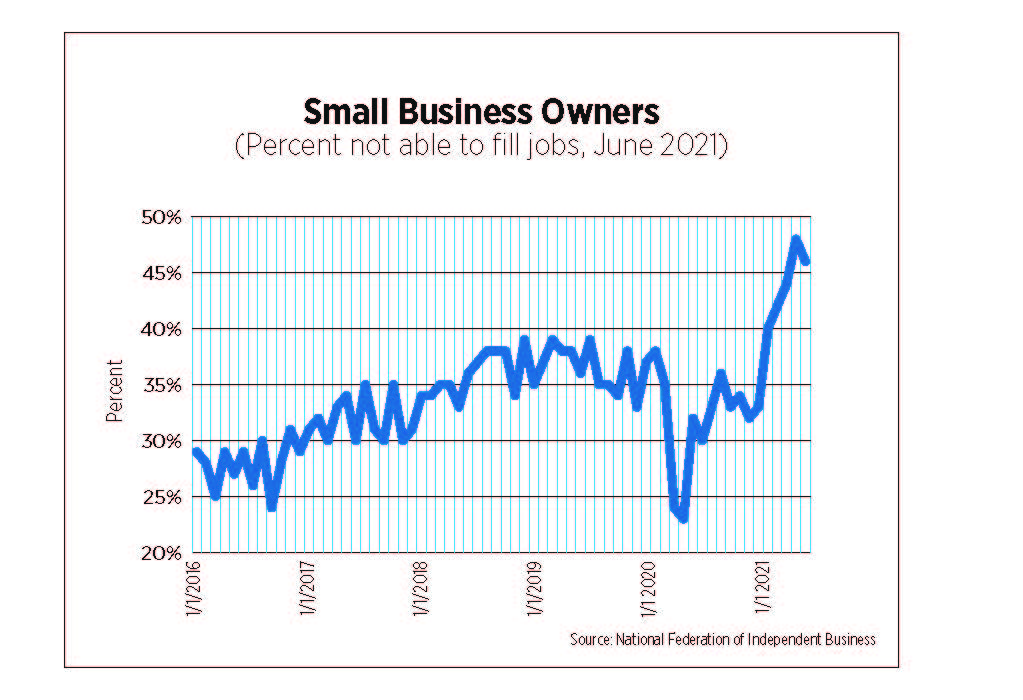 Both the Consumer Price Index (CPI) and Personal Consumption Expenditure (CPE) index, which the Fed uses in its policy decisions, experienced significant increases in the past several months, intensifying inflation fears among consumers and businesses. The Fed maintained its position that it expects these increases to be transitory. Breaking down the data showed the items that comprised most of the increases in CPI are tied to either the reopening of the economy (airfares, hotel prices, gas) or supply chain constraints caused by the pandemic (new and used cars and trucks), both of which are temporary phenomena.

Heading toward the end of July, public health officials are warning of a fourth wave of COVID-19, predominantly the Delta variant and for the most serious cases, almost exclusively limited to those who are unvaccinated. With less than half of the total population fully vaccinated, according to the CDC, this development certainly merits concern not only for public health, but the economy as well. However, a recent Moody’s Analytics study of the rise in Delta variant cases in the U.K. showed little impact to economic activity. Nevertheless, COVID-19 remains a downside risk in any economic forecast.

The slow rollout of emergency rental assistance has kept the rental housing industry bifurcated with many small owners still not made whole and in precarious financial situations. For the larger, professionally-managed apartment sector, demand unleashed by the economic recovery and attendant household formation is showing no signs of letting up. Although personal savings rates remain elevated, soaring home prices are making it increasingly difficult for some renters to transition to homeownership. And as workers consider abundant choices and plan their next career move, the enduring appeal of the flexibility of renting will persist.