Rent growth across the United States remained strong during the first quarter even amid increasing home sales. Reis reported annual rent growth of 4.2 percent. No markets experienced declines in rent and many had significant growth. Of the 79 markets tracked by Reis, 14 markets saw rent growth of 5 percent or more.

According to RealPage, the increase in rent growth performance was a result of steady occupancy which has been above 95 percent for the past five quarters. Rent increases grew the highest in secondary and tertiary markets where rental rates are low enough with a larger threshold for rent increases yet remain reasonably priced to renters.

Las Vegas and Phoenix take precedence at 7.7 percent and 7.5 percent annual effective rent growth, respectively, well ahead of all other large markets. Charlotte followed behind, ranked third with a price increase of 6.5 percent. RealPage reported soaring development in Charlotte during the past nine years, increasing its apartment stock by 35.5 percent. It’s expected to grow another 4.1 percent during 2019, taking the top spot for inventory expansion. Charlotte’s growth can be attributed to its solid STEM workforce as well as favorable costs of living and doing business. Markets ranking at the end of the spectrum included Syracuse, Tulsa, New Haven and Lexington, each with less than 2 percent rent growth. 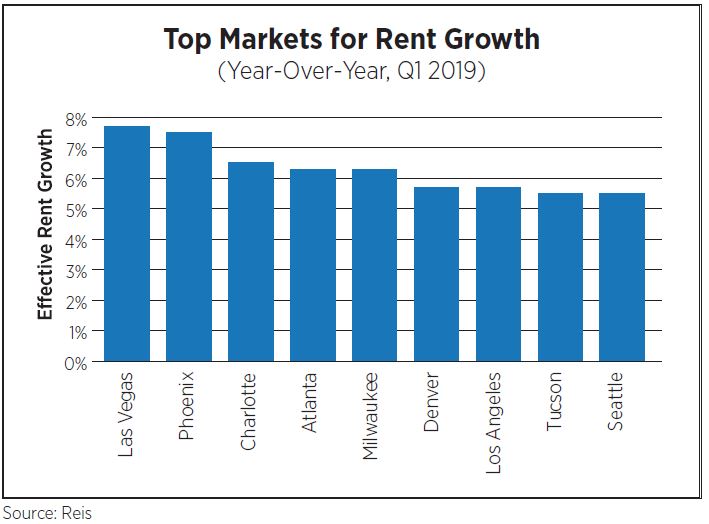 Completions totaled 33,276 units while net absorption yielded 37,159 units as reported by Reis. This quarter produced significantly lower completions and absorption. This was due in part to continued labor shortages within construction as well as increasing construction costs and other barriers. Despite 2019’s crawling start, this year is expected to deliver more units than 2018 with a projection of 336,400 new apartment homes. 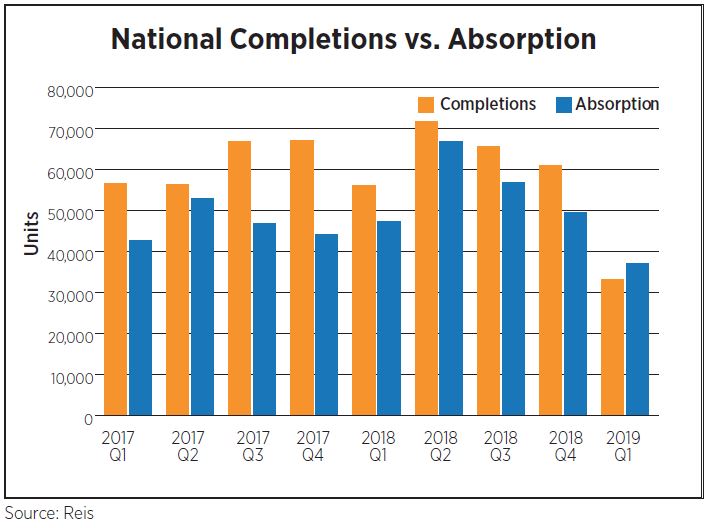 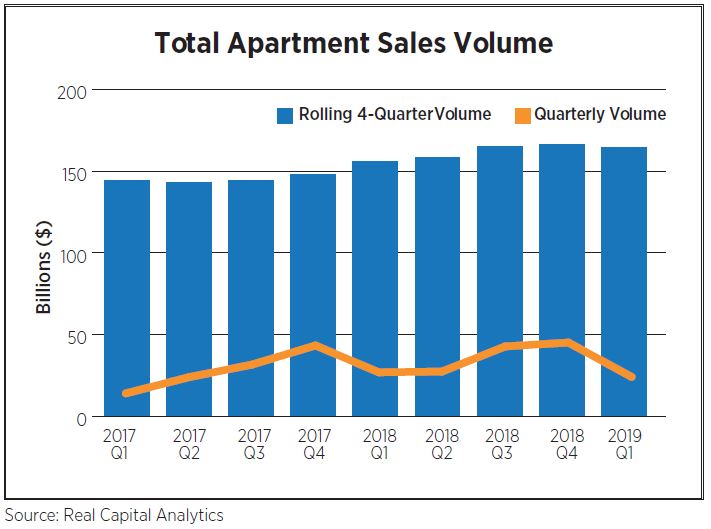 The first three months of the year brought signs of a slowing economy. Even though February’s jobs report was revised upward, it was still the worst monthly total (only 33,000 new jobs) since September 2017. Job additions topping 300,000 in January kept the quarterly average largely in line with 2016 and 2017 but off from last year’s levels. Job openings, which hit an all-time high of 7.6 million in November, have steadily declined to 7.1 million as of February. Regardless, openings far outnumbered the 6.2 million unemployed. The unemployment rate held steady in March at 3.8 percent. 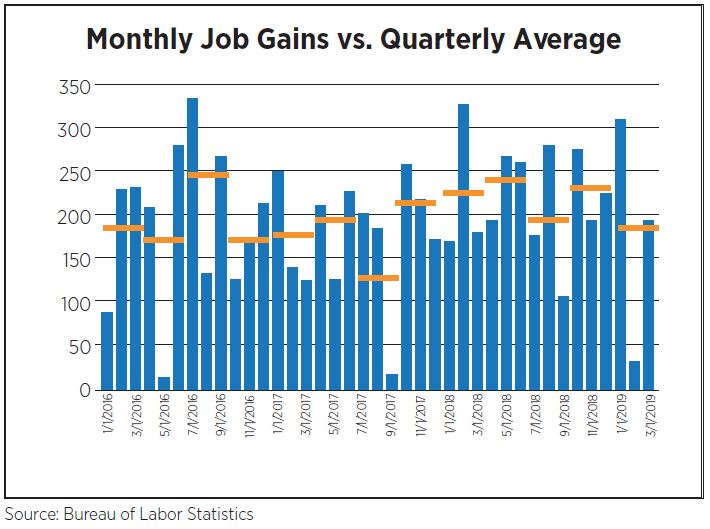 Slower growth predictions came in from a variety of sources across the globe. The International Monetary Fund made headlines by adjusting its global 2019 GDP forecast downward, for the fourth time, to 3.3 percent from 3.9 percent last summer. Closer to home, The Federal Reserve revised its U.S. GDP forecast for 2019 to 2.1 percent, down from 2.3 percent at the end of last year, but a better performance than the future long-run projection of 1.9 percent. Moody’s Analytics also lowered its expectations for growth to 2.3 percent. Factors cited for lower expectations nationally included slower global growth, trade tensions and waning impacts of fiscal stimulus. Despite forecasts weighted toward downside risks, the consensus view remains a recession-free 2019. 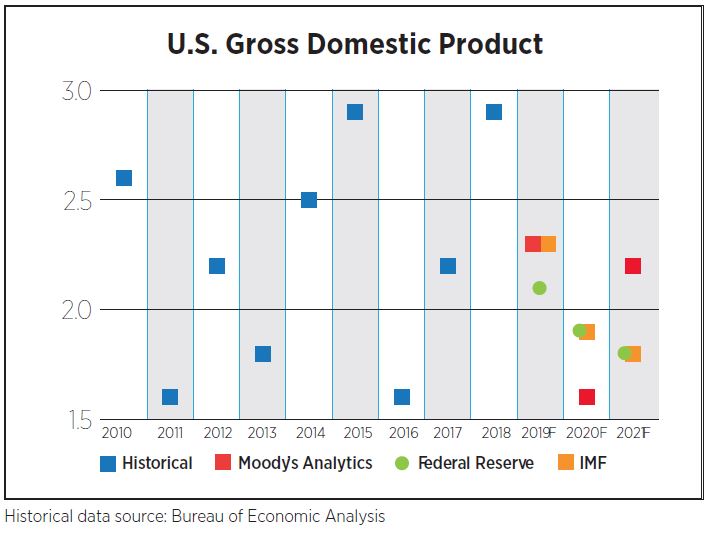 A slower start to the year had been anticipated, and thus should not rattle investors or business owners much. The tight labor market means employers are having an increasingly difficult time finding the right workers, so the hiring process slows. The effect of the Tax Cuts and Jobs Act was forecast by both the private and public sectors as a positive hit to 2018 economic growth, dissipating in 2019 and beyond.

Several positive factors at play will keep the apartment industry in steady, if not stellar, growth mode this year. Interest rates have stabilized, and the Fed has announced it will only raise rates one more time through the end of 2020. Increased costs of capital, a major concern for apartment property owners and operators a year ago, is not on the immediate horizon. And with few exceptions, apartment demand is keeping up nicely with new supply. With mortgage interest rates starting to decline again and housing inventory growing, we can expect more residents to transition to homeownership this year, but the lifestyle draws to apartments: community, amenities, convenience, and freedom will hold their attraction for many current and prospective residents.