The Consumer Price Index (CPI) rose 5.2% on a year-over-year basis, while prices excluding food and energy (core CPI) rose 4.0%, lower than the prior two months. On a monthly basis, CPI and core CPI recorded their slowest pace of growth in 7 and 6 months, respectively, and were below consensus expectations.

Breaking it down by categories excluding food and energy revealed the highest price increases this month in new vehicles (1.2%), hospital services (0.9%), and motor vehicle maintenance and repair (0.8%) while airline fares fell 9.1%, motor vehicle insurance was down 2.8% and used cars and trucks experienced a 1.5% decrease.

The data suggest the Delta variant may be hindering some consumers from moving forward with leisure activities. In addition to declining airfares, prices were also down for lodging away from home as well as car and truck rentals. 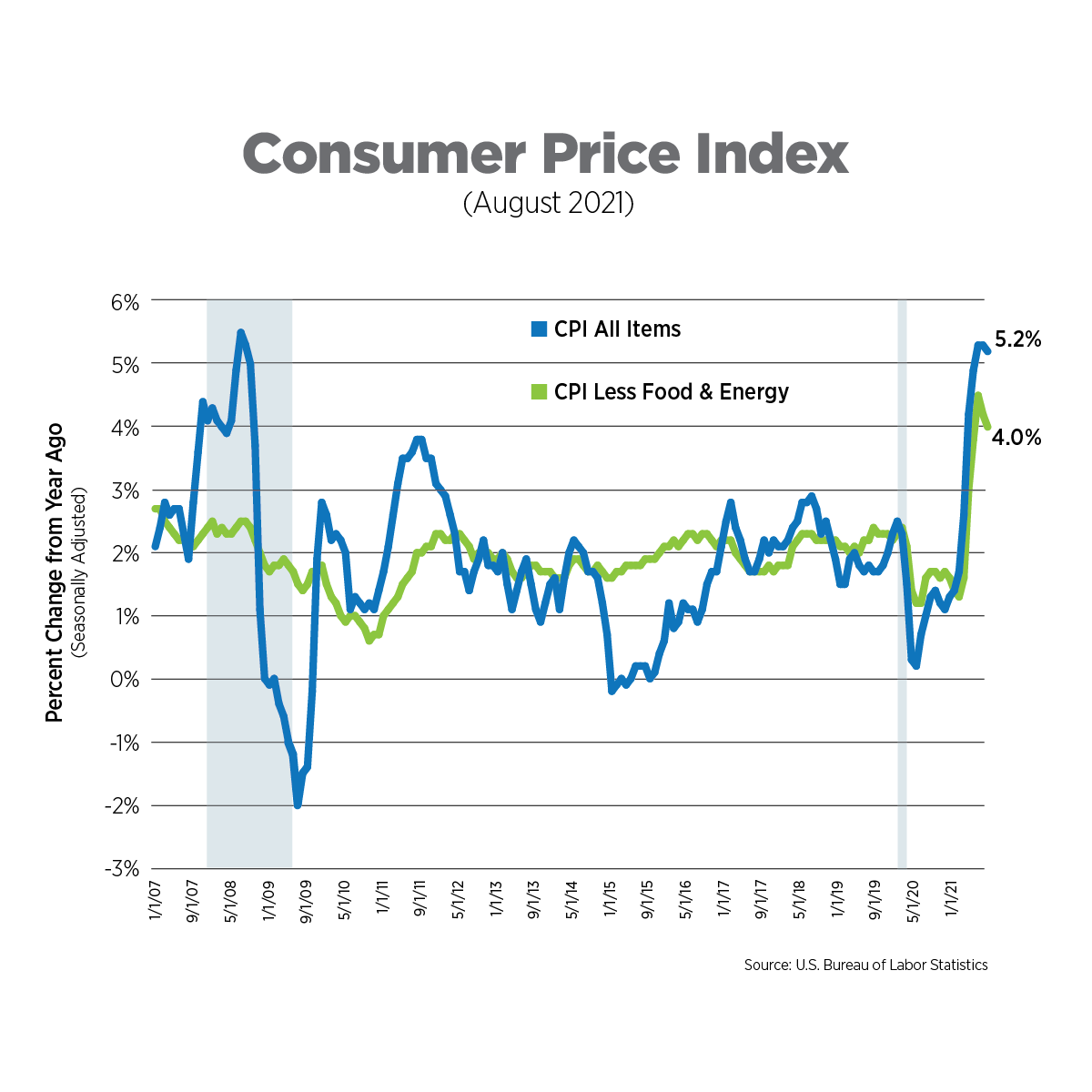 We have examined several alternative measures of inflation in prior Inflation Trackers, but the Atlanta Fed consolidates all of them into an Underlying Inflation Dashboard, updated monthly.  As of July, the most recent update, two-thirds of inflation measures tracked in the dashboard were running one-half a percentage point or more above their targets – a troubling indicator of potentially longer-term price pressures. 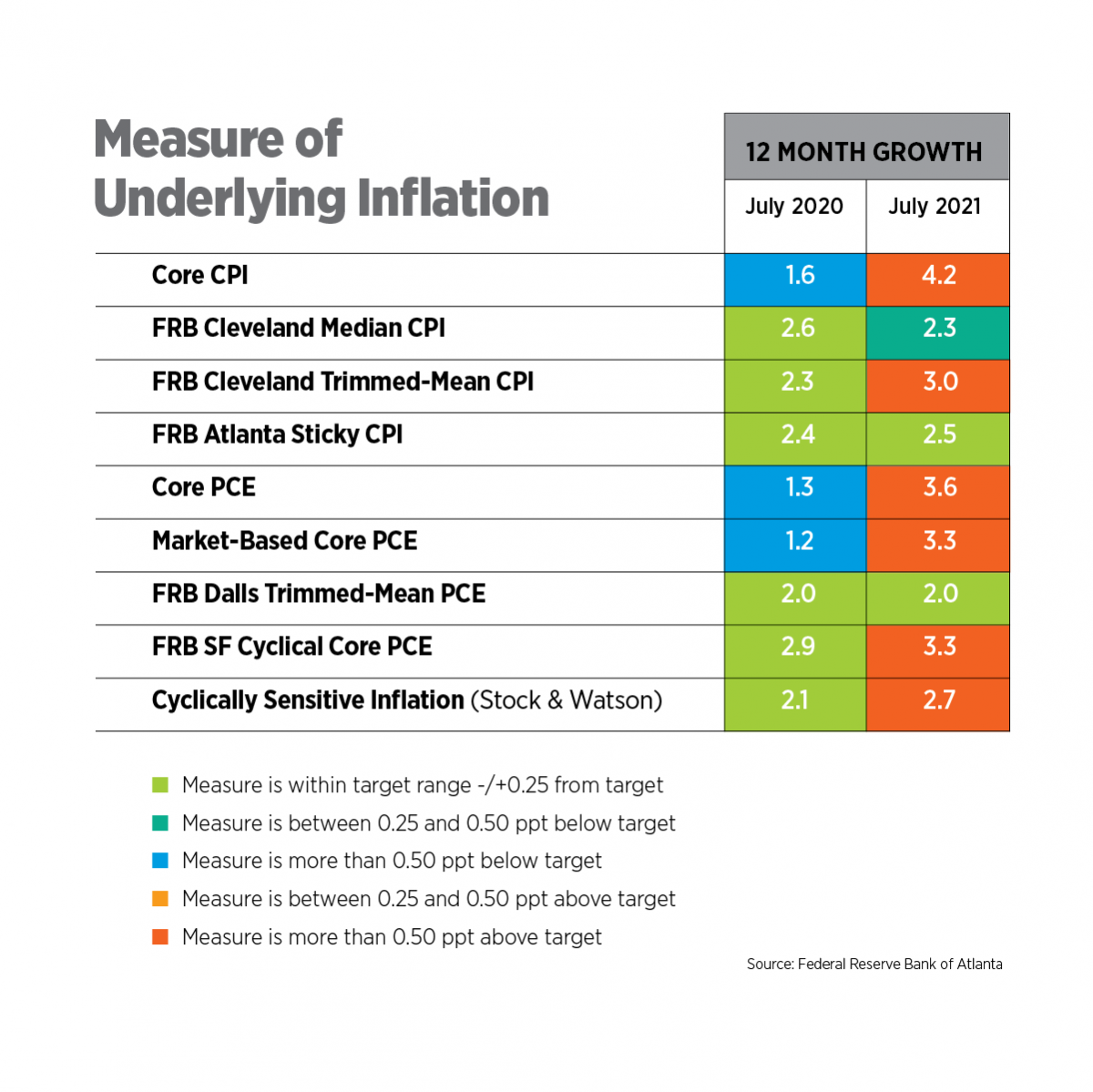 In July, the core PCE increased 3.6% year-over-year, the same level as the prior month (revised upwards) which was a 30-year high. On a monthly basis, the 0.3% increase in the core PCE was the smallest gain since February. At its current rate of 3.6%, it would take 5 more months for the PCE to achieve a five-year average of 2%, the Fed’s long-term target. 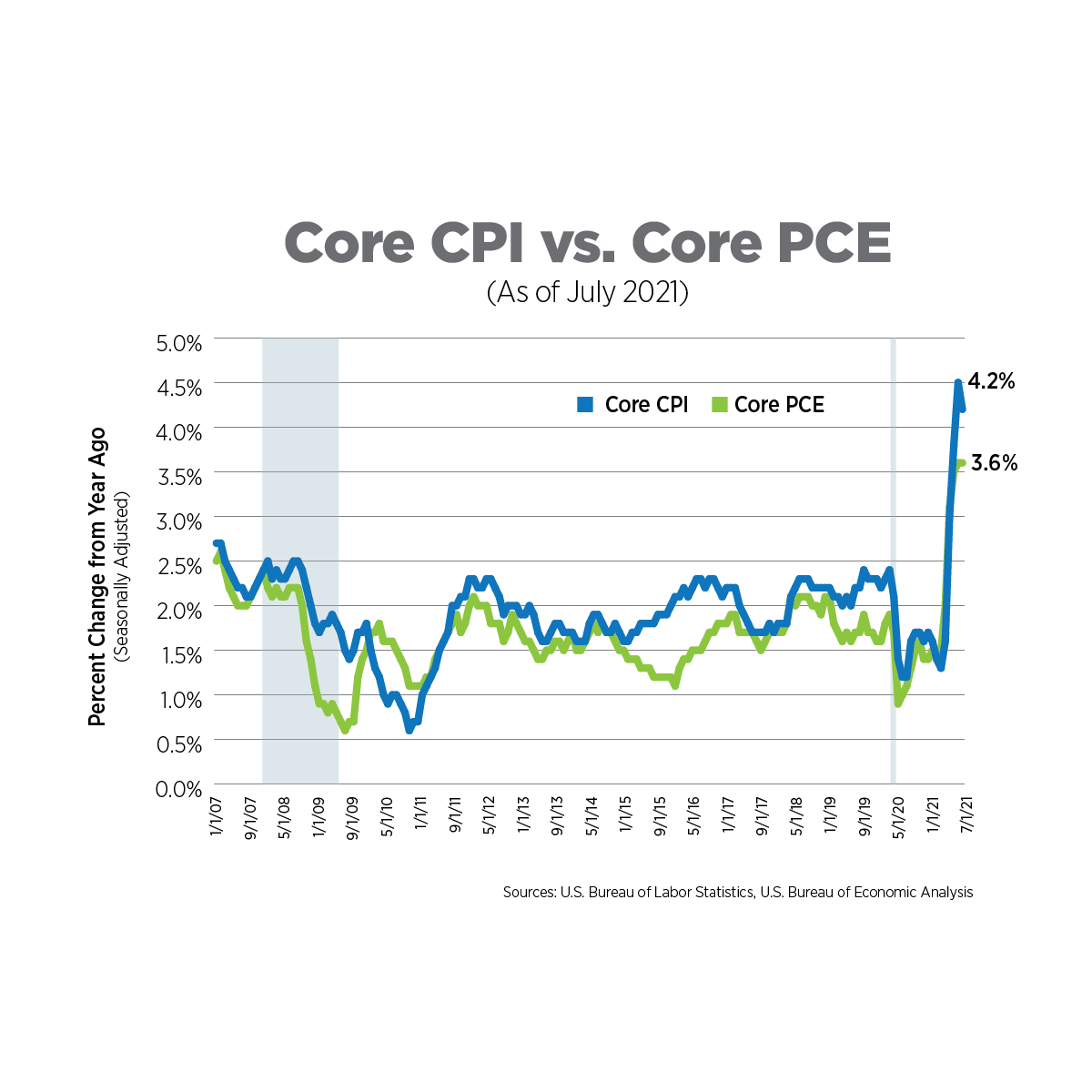 The BLS aggregates all construction inputs excluding capital investment, labor and imports for single-family and multifamily construction. Price increases finally decelerated in August, but are still highly elevated at 20% and 19.6%, respectively, on a year-over year basis.  While lumber prices have finally moderated, the costs of steel mill products, building paper products and asphalt, among others, are still experiencing massive increases. 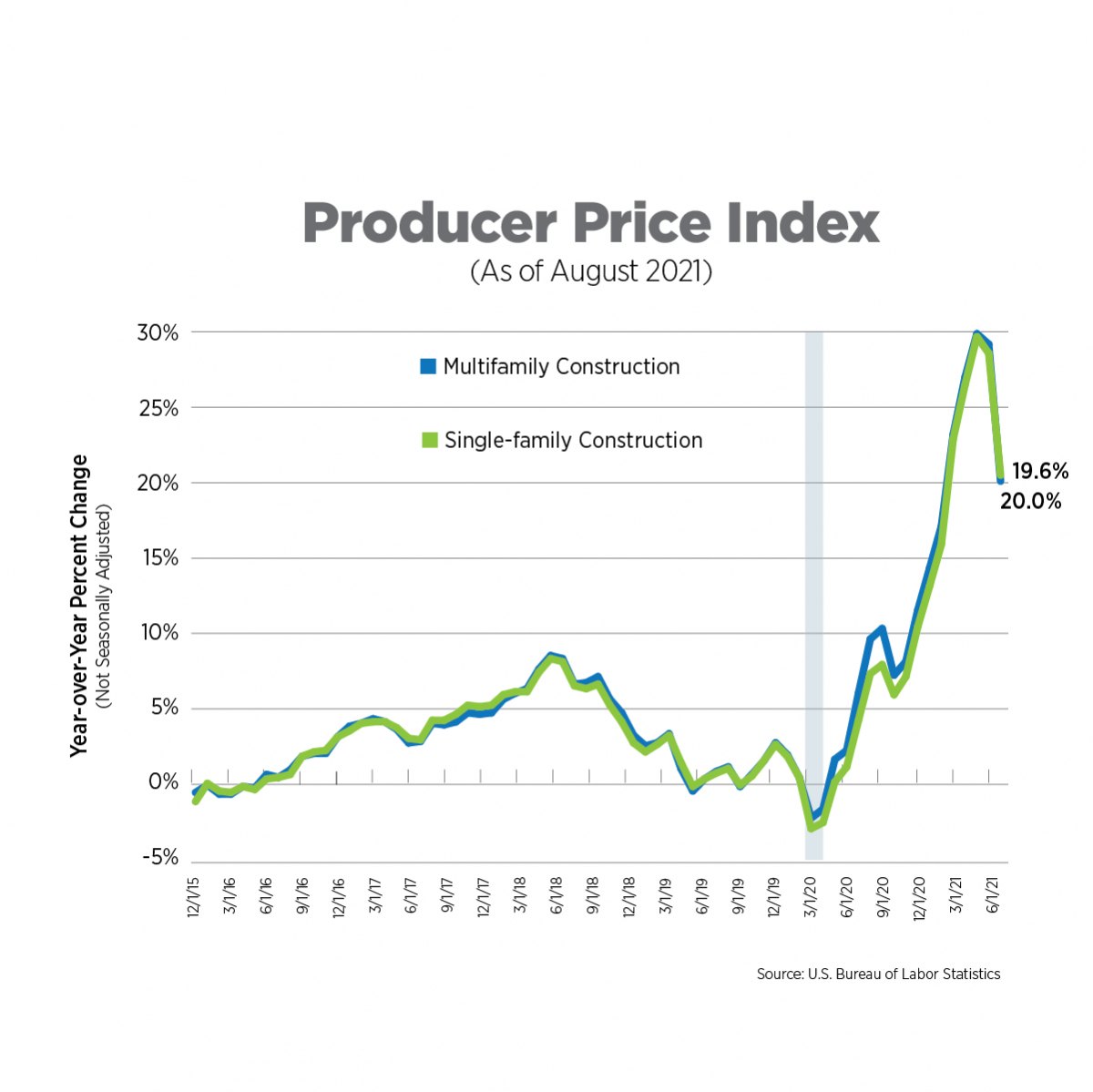 Wage growth, as measured by the change in average hourly earnings, has been nothing if not volatile since the pandemic began, reflective of large fluctuations in employment levels, particularly among lower-wage workers.  In August, wages increased 4.3% on a year-over-year basis, driven by the leisure & hospitality sector, education & health services, and retail trade.

With the number of job openings at record levels and businesses experiencing persistent hiring challenges, wage increases can be expected to continue until the labor market begins to normalize. The end of unemployment benefits and the return to full-time classroom instruction should result in more and more workers returning to the labor force. 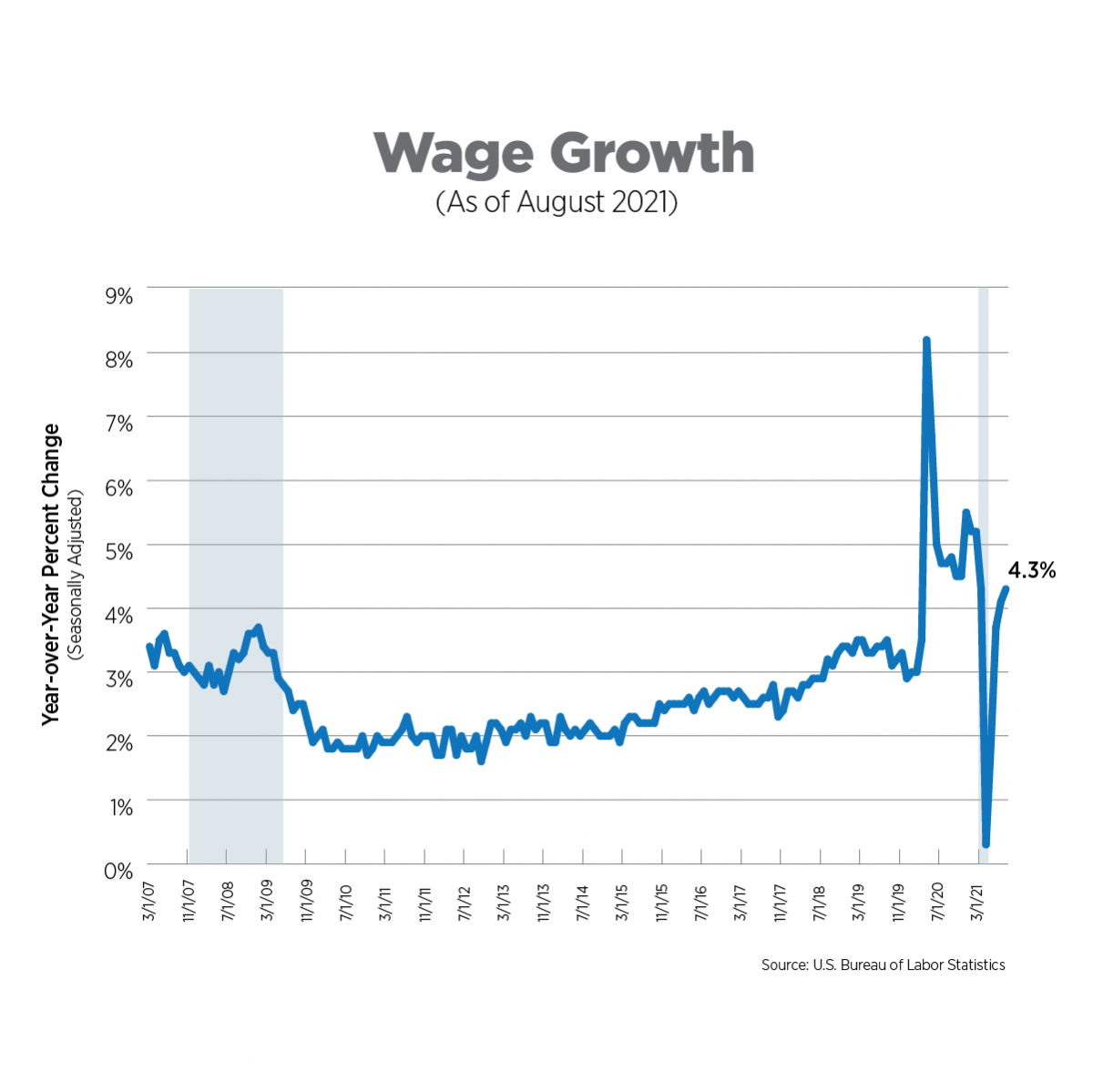