WASHINGTON, D.C., June 26, 2017 – Honolulu, Boston, Baltimore, Miami and Memphis are the hardest cities to add necessary new apartments, according to new research from Hoyt Advisory Services (HAS), commissioned by the National Apartment Association (NAA) and National Multifamily Housing Council (NMHC). The research examines and ranks 50 metro areas based on specific factors, including local regulations and the amount of available land to develop. 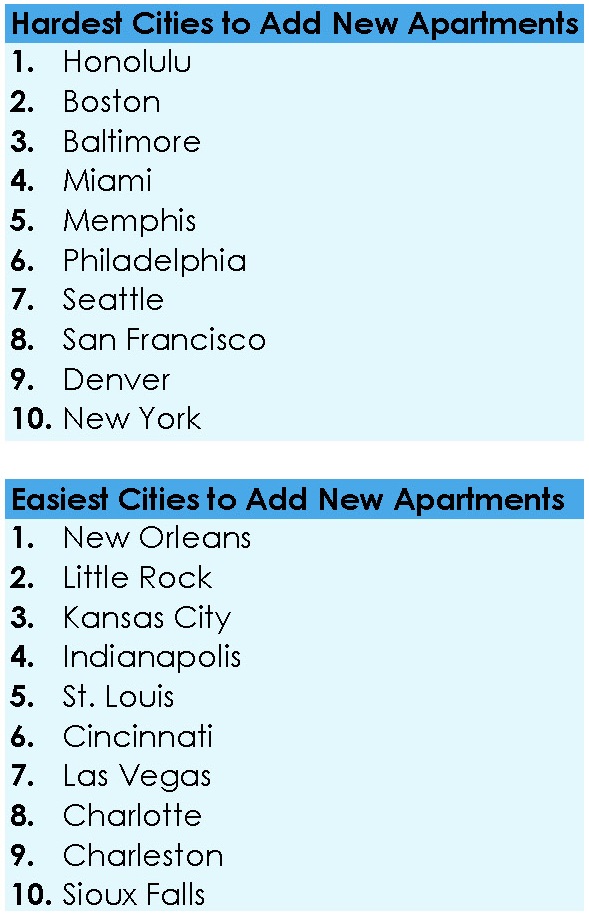 The ranking, titled the Barriers to Apartment Construction Index, scores 50 metro areas along an index that goes up to 19.5 in the most difficult market to add apartments (Honolulu) all the way down to -5.9 in the easiest (New Orleans). While real estate is very project specific, any score above the median of 1.8 means that it is harder to add new apartments in a specific metro compared to other metros. Regardless of where each metro area ranks, the United States needs to build at least 4.6 million new apartments by 2030 to meet the expected increase in demand; otherwise the affordability problems that exist today will only get worse.

NMHC and NAA also today released Vision 2030, a set of recommendations for all levels of government on how to lower barriers to development and better address the current and future housing shortage of all types of apartments and at all price points. To add to the challenge of accommodating 4.6 million apartment households, as many as 11.7 million existing apartments could need to be renovated, or risk being lost from the stock.

The number of apartment renters is at an all-time high, and the growing demand for apartments is making it challenging for millions of families nationwide to find quality rental housing that is affordable at their income levels.

“For many families, the shortage of affordable rental housing creates significant hurdles that can hamper their future financial success. This is not just a problem for today. By 2030, the affordable housing crisis will become even more severe unless public and private sector leaders take bold, innovative action,” said Dr. Norm Miller, Principal at Hoyt Advisory Services and Professor of Real Estate at the University of San Diego.

“While the number of new apartments built each year has been rising, it hasn’t been enough to meet current demand and make up for any possible shortfall at certain price points in the years following the recession. This imbalance between high demand and limited supply options has driven down affordability and reduced housing options for renters. Rents tend to be particularly high in areas with the greatest barriers to new development, such as California, where there’s a significant shortage in available land for building new apartment homes. This makes it more expensive to build,” said NAA Chair Cindy Clare, CPM.

“For many reasons, building apartments has become costlier and more time-consuming than it needs to be. Over the past three decades, not only have hard costs like land and materials risen sharply, regulatory barriers to apartment construction have also increased significantly, most notably at the local level,” explained NMHC Chair Bob DeWitt. “These obstacles to development, such as outdated zoning laws, unnecessary land use restrictions, arbitrary permitting requirements, inflated parking requirements, environmental site assessments and more, discourage housing construction and raise the cost of those apartment communities that do get built.”

To reach the goal of building 4.6 million apartments by 2030, government officials and private developers must come together to take action. NAA and NMHC are advocating for solutions at all levels of government that will help supply meet demand and reduce the cost of developing apartments.

State and local governments have a toolbox of approaches they can take to address the apartment shortage and help reduce the cost of housing. They can:

Based on research conducted by Hoyt Advisory Services and commissioned by NMHC and NAA, the data includes an estimate of the future demand for apartments in the United States, the 50 states and 50 metro areas, including the District of Columbia. For the purposes of this study, apartments are defined as rental apartments in buildings with five or more units. The data are available on the website www.WeAreApartments.org.

In conjunction with the study’s release, the website www.WeAreApartments.org breaks down the data by each state and 50 key metro areas. Visitors can also use the Apartment Community Estimator – or ACE – a tool that allows users to see the trends in their state or metro area to determine the potential economic impact locally.

Ranking the Hardest and Easiest Cities to Add New Apartments
Honolulu is the hardest city to add new apartments and New Orleans is the easiest, according to new research released yesterday and commissioned...
Read More
Which City Is the Hardest to Add New Apartments?
Find out which city is the hardest to add new apartments, which is easiest and where your city fits in the new Barriers to Apartment Construction...
Read More
United States Needs 4.6 Million New Apartments By 2030 or It Will Face A Serious Shortage
To meet growing demand, America needs to build at least 4.6 million new apartment homes at all price points by 2030. In addition, as many as...
Read More
NAA and NMHC Statement on Executive Order Statement
WASHINGTON, D.C. — Statement from the National Apartment Association (NAA) and National Multifamily Housing Council (NMHC) on the announceme...
Read More
U.S. Needs 4.6M New Apartments by 2030 to Keep Pace with Demand
Growing Demand is Due to Aging Population, Immigration, Declining Home Purchases WASHINGTON, D.C., June 12, 2017 – Delayed marriages, an agi...
Read More