Home » Keeping Your Cool Where HVAC Is Concerned

Keeping Your Cool Where HVAC Is Concerned

Maintenance technicians who serve the nation's apartment communities face a number of challenges regarding HVAC repairs and upkeep. A changing regulatory environment, advancements in technology and new efficiency standards are just a few. One such professional who has weathered a lot of change over the years is David Jolley, CAMT, National Director of Maintenance and Purchasing for the Pinnacle Family of Companies. He has been in that post for nearly seven months now. Prior to that, he worked for Equity Residential for 35 years.

What follows is our discussion on all things HVAC:

NATIONAL APARTMENT ASSOCIATION: When should apartment communities begin prepping their HVAC systems for the heavy usage months of the summer? 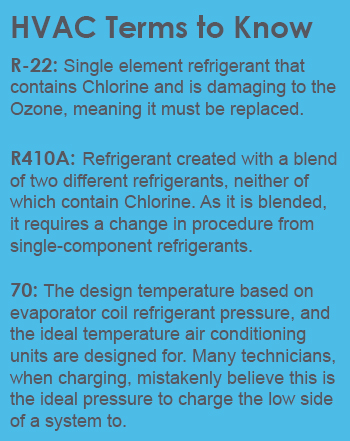 DAVID JOLLEY: There are two phases. They can do it in the winter when things are slow. That includes doing the interior preventive maintenance, cleaning the evaporator, the squirrel cage, the blower assembly, making sure the inside is as clean as possible so that we get the air flow and the heat transfer. This can all be done in the winter months when your work load slows down. Then, the outside work can be done as the weather breaks. When you get past the freezing stage, you can start washing outside condensing units. If you're in Florida, you can do that almost year-round. If you're in Tennessee or places further north, then you have to start moving that out into March and April so the condensing units can be washed with water and not freeze and do damage.

NAA: What have been some of the biggest changes that have affected HVAC repairs in the last few years?

DJ: The biggest change has been the phase-out of R-22. The industry is still in a bit of turmoil in that their replacement for R-22 was going to be R-410A, which is now on a list for a phase-out itself. So, the industry is not 100-percent confident in what the new refrigerant for the future is going to be.

NAA: What was the difference between the two?

DJ: R410A is a blend of two different refrigerants, where R-22 is a single element refrigerant. Bringing in a blend of refrigerants brings in a different process of how we charge a unit, how we recover when we have a leak down and the steps we have to take to recharge the unit. The pressures are different. All of the equipment we use has to be set up for R-410A. With the pressures being much higher than R-22, the equipment has to be set up to handle the higher pressures. The oil that is in the refrigerant is different. One is a synthetic, and one is a mineral oil. They don't blend together. So, you have different characteristics. The synthetic blend absorbs moisture much greater and much faster, and it can create problems if we don't have good air-tight systems. We all have units that we know leak and we can't find the leak. We've looked, but each year we have to go over and give it a little bit of refrigerant. With the R-22, we can just go over and give it a shot of refrigerant. The leak does not go away, just the system is recharged and back to cooling until it leaks out again. With R-410A being a blend and there being two different boiling points in the refrigerant itself, one of the refrigerants may leak out faster than the other. When it does that, it's not a balanced mixture anymore. Once the leak is found, the unit must be recharged using new refrigerant. It is not recommended to use recovered blended refrigerants.

NAA: What would you say is the No. 1 piece of advice an apartment maintenance technician needs to know going into this summer?

DJ: Have the proper charging procedures in place. We've accepted the term "70." But many of our associates don't really know what "70" means. Because of their training, they know they need to charge to a pressure that's close to 70. But there are a lot of things that come into play to get to that 70.

DJ: What 70 is, it's a design pressure. When they design an air conditioning system, they want the evaporator coils to be 40 degrees. Below 40 degrees, we get into the freezing stages. Above that, we get where heat transfer is not so great. So, 40 degrees is best. And if you take 40 degrees temperature, we're going to have a refrigerant pressure of around 68.5 pounds -- close to 70. So, that's where the term "70" comes from. You want to get it close to 70 because that's the ideal the air conditioning unit was designed for, and that's the best temperature range. Things that affect 70? Outdoor temperature, for one. Is the evaporator clean? Is the air handler clean? Is the condenser clean? Is everything moving the amount of air that it was designed to move? If any one of those is dirty, it will affect what that temperature change is. So, you're trying to get to 70, all of a sudden you're not a true 70 because you're not clean. If we don't have a clean evaporator and you don't have clean filters in the system, it's nearly impossible to get a true 70.

NAA: Is there one thing maintenance technicians wish property managers understood better about what they do?

DJ: They probably wish managers understood the amount of time it takes to truly service a unit--cleaning it, charging it, looking for leaks -- to do it and do it right takes time.

NAA: Why have there been so many changes in the regulatory environment these past few years?

DJ: Of course, there is the Montreal Protocol, which is the phase-out of R-22 because it damages the ozone layer. With that phase-out, there has been a lot of after-market, so-called "drop-in" refrigerants that different manufacturers have developed. There's Cold 22, Freeze 22. There are all different brands, but they all have a side effect to them. You lose efficiency. The industry is trying to develop what the newest refrigerant is going to be. They thought 410A was going to be it, but it has too much carbon in it. There has been a lot of talk that it might be propane. Propane has some very close characteristics of R-22 in the temperatures and the pressures. The isometrics are very close to being the same. The problem is it's very flammable if it leaks.

NAA: What do you think the future holds in this regard?

DJ: One of the things we're seeing this year is that pricing for R-22 has dropped. Part of that pricing drop is they figured by 2014 and 2015, that stockpile would be much more depleted than what it is. So many people are pushing for 410A. Every contractor out there is selling new systems that use 410A. Everything that has been built new is now 410A. With that, not as much R-22 is being used as what they originally anticipated. So, there's a little more to the stockpile, and now they're dropping the price on it because they don't want to get left with large supplies of it on their shelves. In some cases, it's around $100 less for a 30-lb. drum than it was last summer. That's a big drop. I am not sure what DuPont and other leading chemical manufacturers out there are doing to try and find the ideal replacement. There's just a lot of questions as to "Where are we going?" and "What are we doing?" Personally, the thought of using propane is scary only because of our relaxed service procedures that too many times our guys use in our industry. Too many in our industry have "IWS training" -- IWS means "I Watched Somebody." They've never gone to a technical school or sat down in a class to understand the isometrics of refrigerant. Well, 70 on a day in Phoenix when it's 110 degrees outside, I'm going to have a unit that's undercharged. By comparison, 70 on a day when it's 68 degrees in Michigan, I'm going to be overcharged. They need to understand the pressure-temperature correlation that goes with each other. As the temperature goes up, the pressure is going to go up. I think as an industry going forward, we're going to have to be better service technicians.

AC Refrigerant Challenges Are a Hot Topic in August
Community managers must weigh a number of factors when deciding how to deal with refrigerants.As temperatures reach their annual peaks in many...
Read More
EPA Refrigerant Regulation Struck Down
A Federal Appeals Court recently struck down an EPA regulation that would have required manufacturers to replace hydrofluorocarbon (HFC) refrigerants.HFC...
Read More
Get Proactive with Preventing
Preventative maintenance (PM) is one of those topics that continue to vex all levels of onsite personnel. While many see the benefit and can...
Read More
Controlling Energy Efficiency in Student Housing
Whether you own a hotel, an office building, or a student housing property, you strive to achieve the same outcome: happy and satisfied residents,...
Read More
Five Ways to Prep Your Community for the Fall
Follow these five steps and your community will be ready for cold weatherAfter the heat of summer is over, it is important to get ready for the...
Read More