I have been a government and public affairs professional for a long time. Which is to say, I have seen and experienced enough that I can effectively disassociate my personal feelings about an issue and objectively judge if something is good, bad, fair or unfair. The image shown below is one of the few times that I abandoned that objectivity and allowed myself a more visceral response. 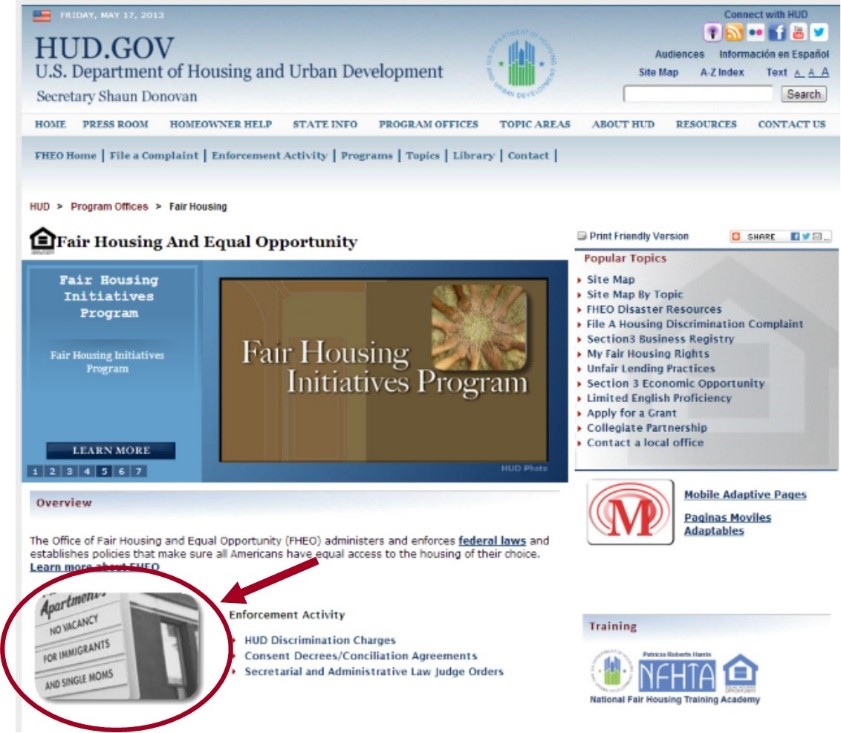 The image came from the HUD.gov website. It is an actual screen shot taken on May 17, 2013. The only thing I added was the red circle and arrow to draw your attention to the key image. Keep in mind, this is not a real image. It’s not real in that this sign doesn’t exist in the real world. Nobody snapped a shot of a sign proclaiming “NO VACANCY FOR IMMIGRANTS AND SINGLE MOMS” with their camera phone. This sign was never posted in a community in any town USA. It was manufactured.

This image was manufactured to perpetuate a narrative, and a false one at that. This is a product of make-believe and poor judgement aided by photo editing software. The famous Patterson footage of a grainy Bigfoot walking into the forest is based on more reality than this piece of work. Yet here we found it, on a government website. Now to HUD’s credit, this was taken down after the industry’s not-so-subtle complaint about its inclusion.

Understand, HUD is and will continue to be a partner with the industry. In Washington D.C. circles, that is the closest thing you can have to a friend aside from the recommended adage of a dog in this town.

My point is not to pick a fight or open old wounds, but emphasize how much of what we face as an industry is based on perception, not hard facts. HUD’s point in using this image was to be vigilant in identifying and rooting out discrimination; however, others look to perpetuate a disparaging perception of property owners to promote an ever-escalating agenda against the industry.

A good example of this is what prompts source of income discrimination proposals. This proposal is premised on nothing more than the perception that the industry simply does not want to accept recipients of Section 8 Housing Choice Vouchers. This perception completely ignores the apartment industry’s long history of working with public housing agencies, aiding millions of families, and the continual lobbying of Congress by the industry to increase funding and refine policies and procedures to streamline this program. Further, advocacy groups fail to recognize the role that program inefficiencies and duplicative requirements play in discouraging private providers from accepting vouchers.

Unfortunately for the industry, it only proves that it is easier to cast dispersions and regulate than address the government-imposed burdens that limit participation in this program.

It’s all about the residents

As representatives of the industry, it is in our interest to defend the industry. The industry, for all the good it provides, is a faceless entity. That is until you bring in who the industry serves: its residents. We must translate the impact of a proposed policy to the resident with equal, if not greater, weight.

I once had an elected official corner me about the industry’s screening practices. The official started off with a broad statement saying “I think your industry screens for too much.” As any good lobbyist, I listened to the concerns and noted opportunities to provide counterpoints when they arose.

As the list became longer and the reasons more impassioned, it became clear that the standard industry points would fall on deaf ear. Arguments of protecting a $200k to $500k asset, to legal theory of foreseeability on the part of the property owner would be both hollow and insensitive, and worse, only bolster his position. To the elected official’s credit, we were talking about people.

I replied that I absolutely understood his point of view on the matter, but added that “as long as neighbors care about who their neighbors are, they will expect a level of screening similar to theirs.” Meaning that the decisions of how and what to screen for are not made by the property owner in a vacuum; it is driven by other legitimate business factors including resident demand. The said official understood and accepted that line of reasoning. I not-so-discretely patted myself on the back and said “good job” knowing that I earned my pay for the day.

As always, let me know what you think.

Keeping Your Cool Where HVAC Is Concerned
Maintenance technicians who serve the nation's apartment communities face a number of challenges regarding HVAC repairs and upkeep. A changing...
Read More
A 2020 Case Study: NAA and COVID-19 Advocacy
As the cliché goes, “2020 was an unprecedented year.” The COVID-19 pandemic seemingly overnight knocked the nation’s economy to its kn...
Read More
Safety First: Nationwide Criminal Screening Legislative Update
According to reentry advocates, “Fair Chance Housing” means that people with criminal records should not have to experience additional barr...
Read More
New Proposed Disparate Impact Rule Moving in the Right Direction Thanks to You!
Several weeks ago, we informed you that NAA and NMHC are voicing strong support for the U.S. Department of Housing and Urban Development’s (HU...
Read More
A Modern Approach to Code Compliance
Code noncompliance can lead to a host of monetary and reputational consequences for owners and operators. But it doesn’t have to be that way....
Read More