As Americans and immigrants continue to migrate to metro areas throughout the nation that offer ample employment opportunities and relatively lower cost of living, winners and losers have inevitably cropped up, not just in population growth, but in apartment market performance as well. An analysis of the nation’s fifty largest metro areas reveals a distinction in apartment market performance between business-friendly Sunbelt regions that gained the most people, and older metro areas that gained the least people between 2010 and 2017, whether in total population, domestic migration, or immigration. Markets that attracted the most newcomers posted superior gains on most apartment performance metrics.

According to the Census, four of the top five metro areas for total population growth were in relatively affordable, business-friendly Sunbelt locales, with the top two spots firmly held by the Texan duo of Dallas-Fort Worth and Houston. Texas added 352,100 jobs in the twelve months leading up to May 2018, ranking it first among all fifty states for job creation, according to the Bureau of Labor Statistics. The slowest-growing markets were all located in the Northeast and Midwest, and three of the five outright lost population, namely Pittsburgh, Cleveland, and Hartford. 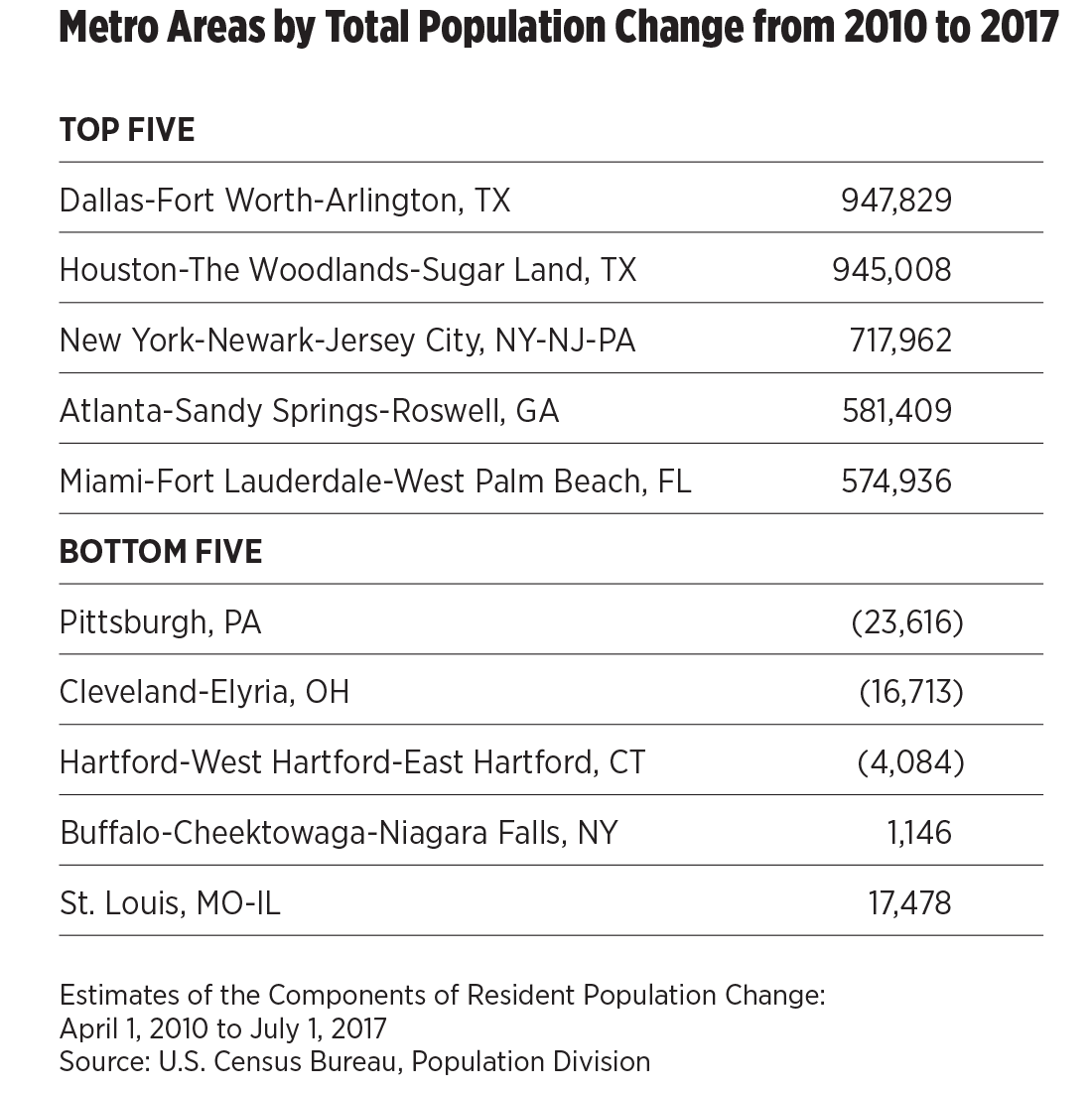 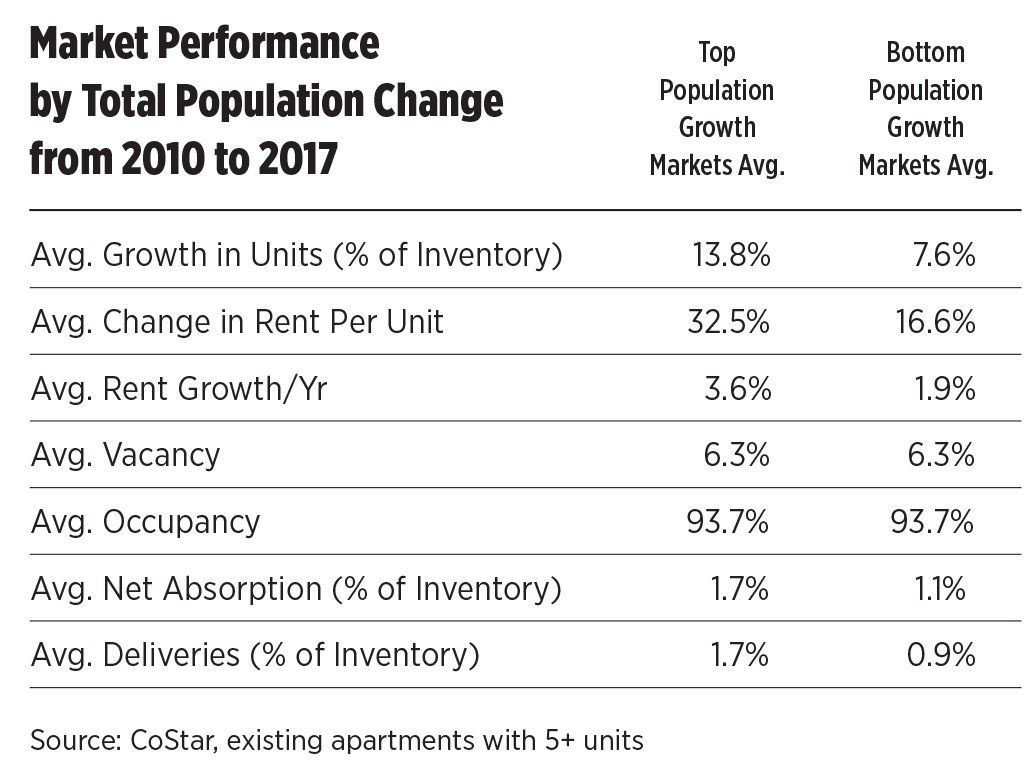 If we take a closer look at one of the two factors making up total population change – domestic migration from 2010 to 2017, all five of the top metro areas were also in affordable, business-friendly regions of the Sunbelt. Texas metros once again dominated this list, with Dallas-Fort Worth and Houston still holding the top two spots, and Austin also having attracted its fair share of domestic movers. At the bottom of the list, we see a collection of older, more expensive markets, led by the nation’s three largest metro areas – New York City, Los Angeles, and Chicago. Although New York City registered an increase in total population during this period, over a million residents left for other U.S. metro areas, while Los Angeles and Chicago lost roughly half a million residents each. New York, California, and Illinois all ranked in the bottom ten of the American Legislative Exchange Council’s 2018 Rich States, Poor States economic outlook ranking, which ranked states based on an analysis of income transfer programs, taxes, and population and job growth. On the other hand, the states possessing the top five markets – Texas, Arizona and Florida, are all ranked in the top fifteen. 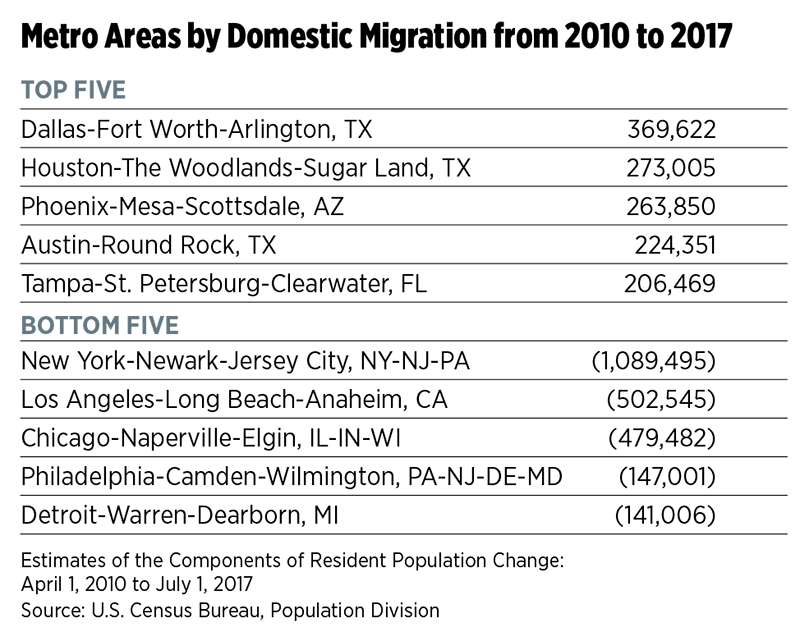 The top markets for domestic in-migration saw inventory in units grow at an average rate of 18.0 percent, almost triple that of the bottom markets. This explosive growth in inventory caused the top markets to experience an elevated vacancy rate of 7.5 percent, versus 5.6 percent for the bottom markets. Nevertheless, the top markets still experienced higher rent increases, with the average rent per unit having grown 35.3 percent cumulatively. Regions with high out-migration saw lower rent growth at 23.7 percent. Despite the higher vacancy rates in the top markets, net absorption was still stronger, indicating that the heavy in-flow of new residents was adequate to swallow new inventory. 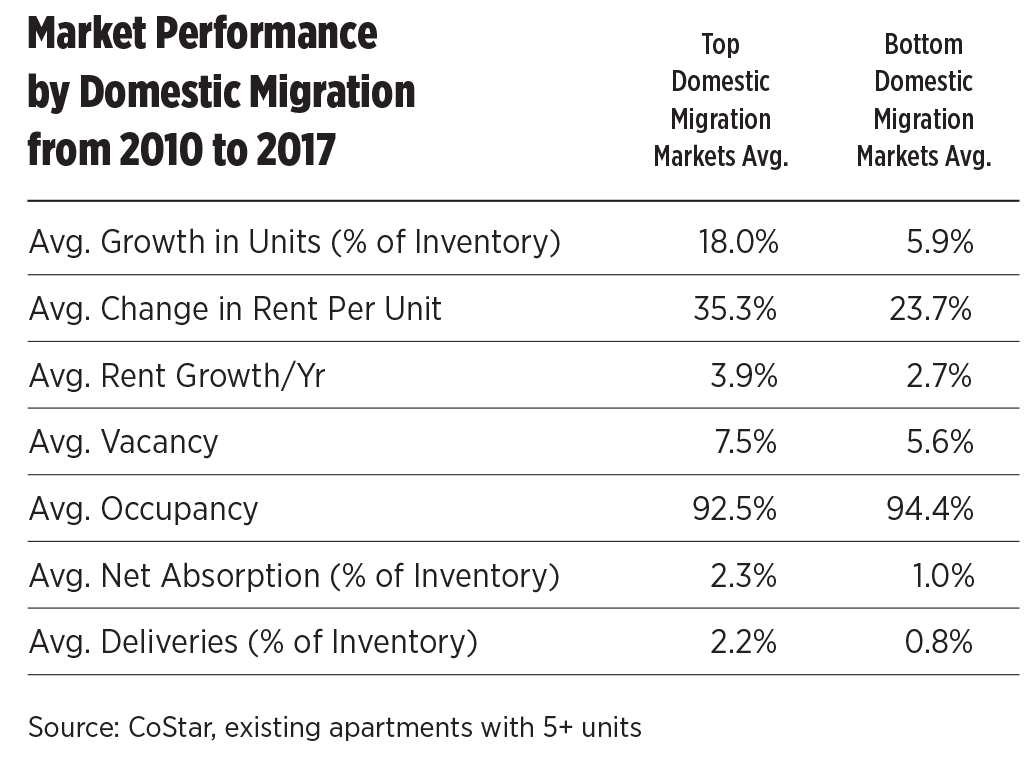 The other major factor comprising total population change is immigration. Except for Houston, the markets with the largest in-flow of immigrants were all expensive and large coastal regions. As discussed above, New York City and Los Angeles have experienced very high rates of domestic out-migration, far surpassing the number of immigrants moving in from abroad.  Metro areas with the lowest growth from immigration were all smaller, affordable markets sprinkled throughout the interior of the country. Interestingly, apart from Oklahoma City, the bottom markets for immigration still had higher gains from immigration rather than domestic in-migration, with Birmingham and Memphis having lost more residents to other U.S. metro areas. 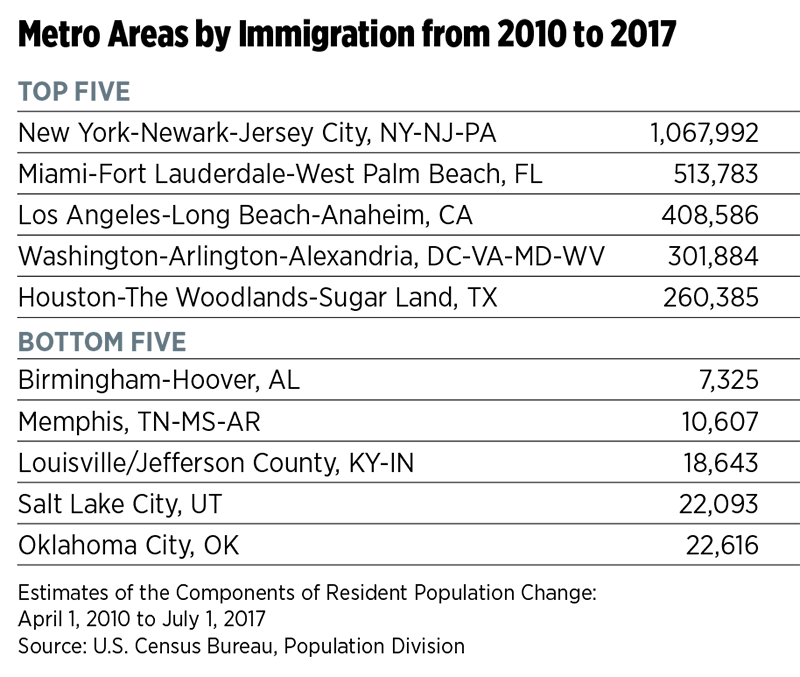 The difference in performance between the top and bottom markets for immigration was more subdued. Although the top markets showed a superior average rent growth rate of 26.5 percent versus 21.3 percent, and lower vacancy rates at 5.3 percent versus 7.8 percent, deliveries and absorption were below the bottom markets. The bottom markets also experienced more growth in the number of units (as a percent of existing stock), possibly explaining the slightly lower rent growth rates and higher vacancy. 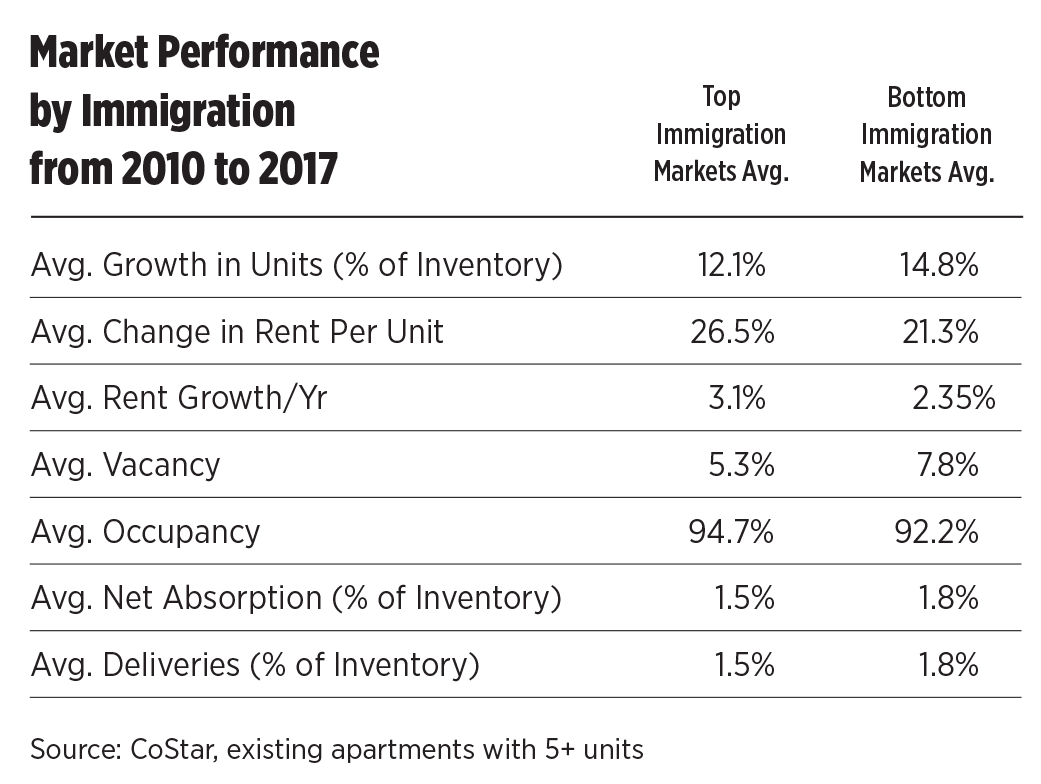 The common thread for the metro areas that experienced the strongest growth in apartment market metrics is that they are mostly affordable, business-friendly, Sunbelt regions. The apartment markets of these areas have been buoyed by strong job growth and a massive influx of new residents. Although the older, more expensive markets have still provided healthy apartment market returns, their results are no match for the winning Sunbelt metro areas. The fact that the top immigration markets, comprised of many of the same older, more expensive markets as mentioned above, only saw marginally better growth rates than the bottom immigration markets, confirms the appeal of business-friendly, affordable regions both for residents and the people who employ them.