Home » Are Apartments Really Getting Bigger?

Are Apartments Really Getting Bigger?

Recent anecdotal stories seem to indicate that larger apartments are becoming more popular as Baby Boomers downsize from their single-family homes into apartments, or as young residents stay in apartments as they begin to have their first children. Coupled with the well-documented challenges toward millennial homeownership, one would think apartment sizes have been increasing. According to data from the Census Bureau, however, these trends may not necessarily be true. 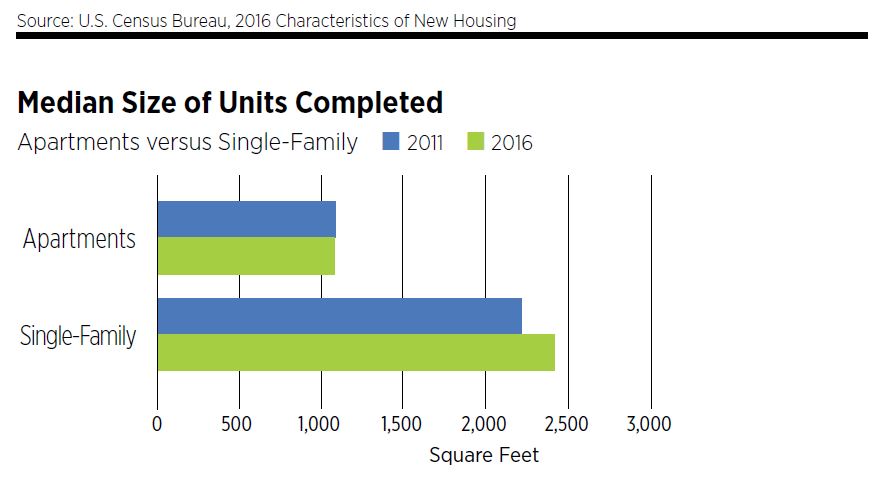 These trends may be indicative of several demographic and economic factors. The shrinking size of apartments may simply be a reflection of the steadily decreasing household size over multiple decades. According to the Census, household size was 3.33 in 1960. As of 2017, there were 2.54 people per household, one of the lowest figures ever recorded. The introduction of micro-units in some of the more urban markets, as well as the growing plethora of neighborhood and entertainment options that encourage residents to spend more time outside of their apartments, may be additional contributing factors.

At the same time, homebuilders have been forced to build larger homes thanks to several pressures. These include increasing land, construction and labor costs, as well as tighter credit requirements limiting the pool of potential homebuyers to the more affluent relative to the boom years.

Breaking down the same data by region gives a similar picture, as median apartment sizes either shrank or remained stagnant in three of the four regions. The South saw apartments shrink the most from 1,205 to 1,101 square feet. The Midwest generally had the largest apartments, followed by the South. Apartments were smallest in the Northeast, followed by the West. 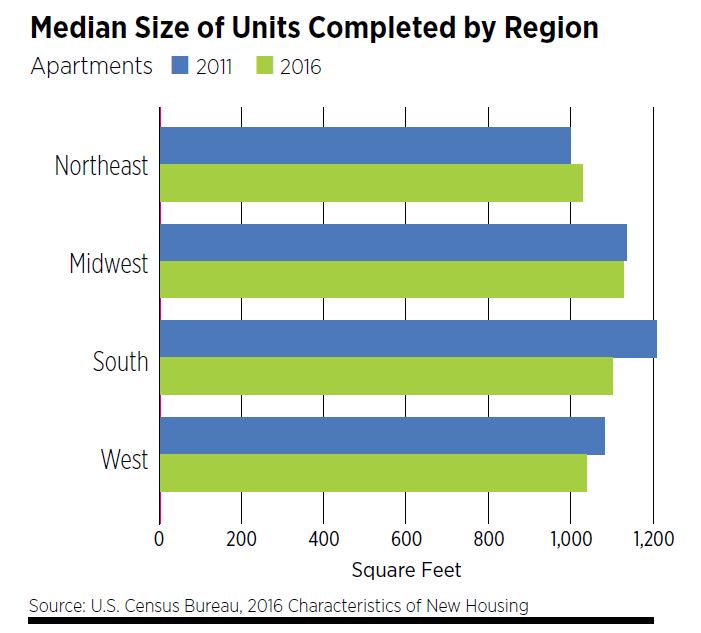 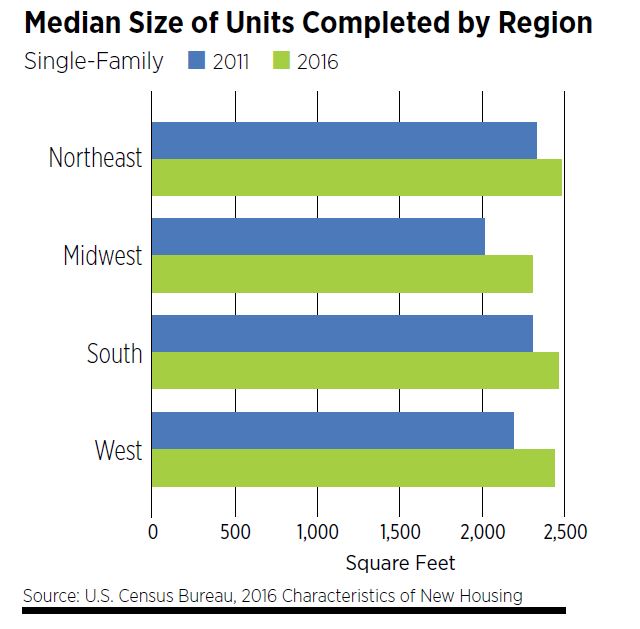 If we examine the average size of apartments by the metro areas with the most units under construction, per recent data from CoStar, we see that apartment sizes will likely shrink even more substantially into the future. With the exception of Greater New York City, apartments are set to be smaller in Dallas-Fort Worth, Washington, DC, Los Angeles and Seattle, even though construction has dramatically ramped up over the past seven years. 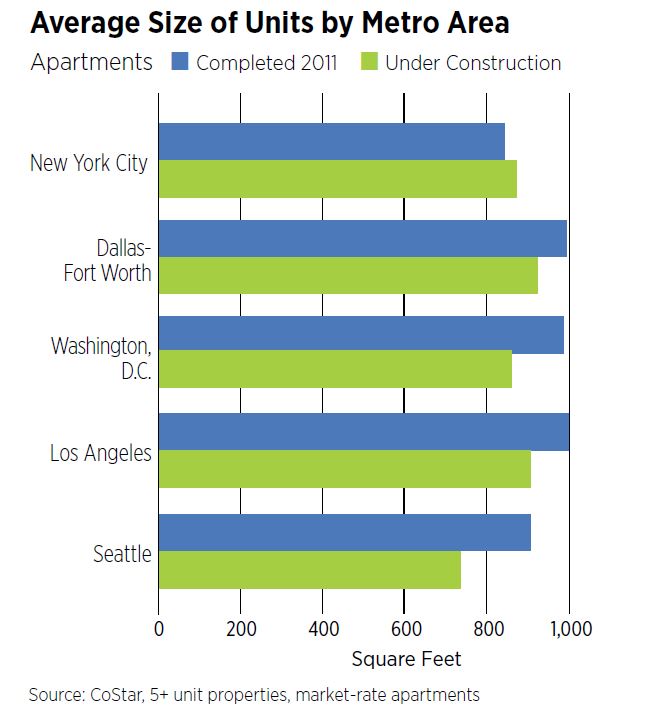 Census data on the number of bedrooms in apartments and single-family homes confirms the same divergent trend of unit sizes. Together, the share of studios and 1-bedroom apartments among newly-completed units increased from 2011 to 2016, while the share of 2-bedroom and 3+ bedroom apartments decreased over the same time. Among newly-completed single-family homes, the share of homes with 3 or less bedrooms decreased over the same period, while homes with 4 or more bedrooms increased from 39 to 46 percent. 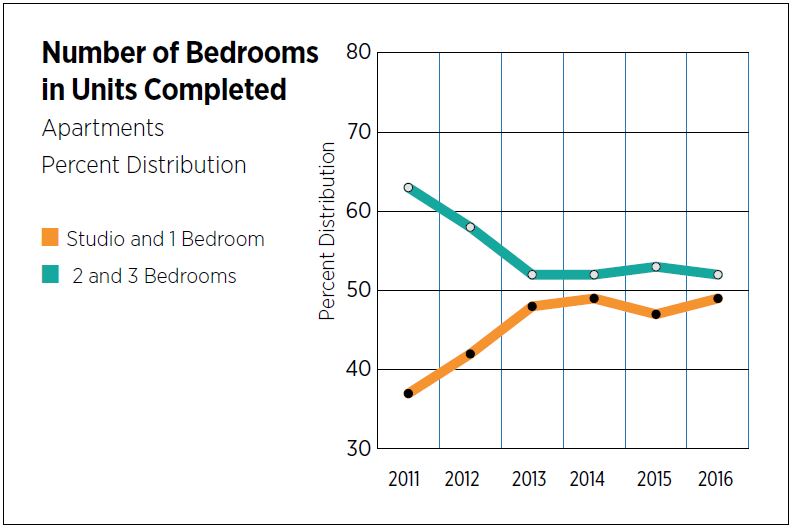 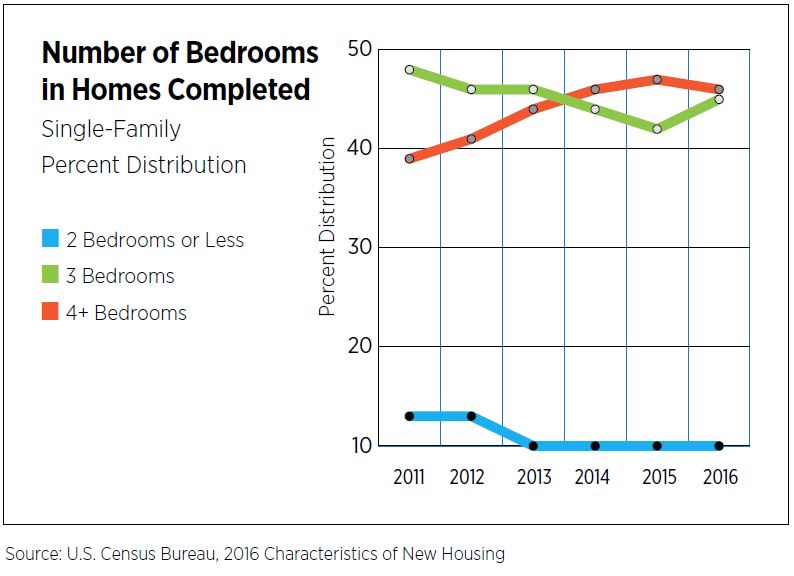 While it is possible that certain demographic groups or niche customer groups are demanding larger apartments, it has not yet borne out in the data, which show that overall, apartments have become somewhat smaller. Whether this means apartment developers are already serving the desires of customers wanting smaller apartments, or if there is an untapped market for larger apartments, remains to be seen.

US Apartment Sizes Are Shrinking
Since 2006, apartment unit sizes in the US have been shrinking steadily, Rent Café Blog reports. Studio apartments have seen the sharpest reductio...
Read More
Which States Have the Largest and Smallest Average Apartment Sizes?
The average size of new apartment units is shrinking—from 1,015 square feet in 2006 to 934 square feet in 2016. Overall, the average size ...
Read More
This Man Lives With His Five Children in a 1,050-Foot Apartment
A Vancouver man with five children ages 5 to 10 manages to live in a 1,050 square foot apartment. Adrian Crook, 41, a videogame design consultant,...
Read More
What Renters Get for $1,500 a Month
How much square footage does a renter get for $1,500 across the country? RENTCafé crunched the numbers on the 30 most populous cities in th...
Read More
The Transformation of Parking
Multiple factors are converging to disrupt everything we know about parking: Its physical structure, format, design, cost and, perhaps most important,...
Read More