Home » Actually, We Are Not a More Mobile Society

Actually, We Are Not a More Mobile Society

Americans are generally moving less than before for a variety of economic and demographic reasons.

Anyone who regularly consumes Census data knows that mobility rates in this country have been declining for decades. So why do we keep hearing about roving Millennials, and the freedom to move as a main reason they don't commit to homeownership? It's true that rates of mobility among young people (ages 20-29) have historically been the highest of any age group, but the fact is that as a whole, Americans are moving around far less than in the past. 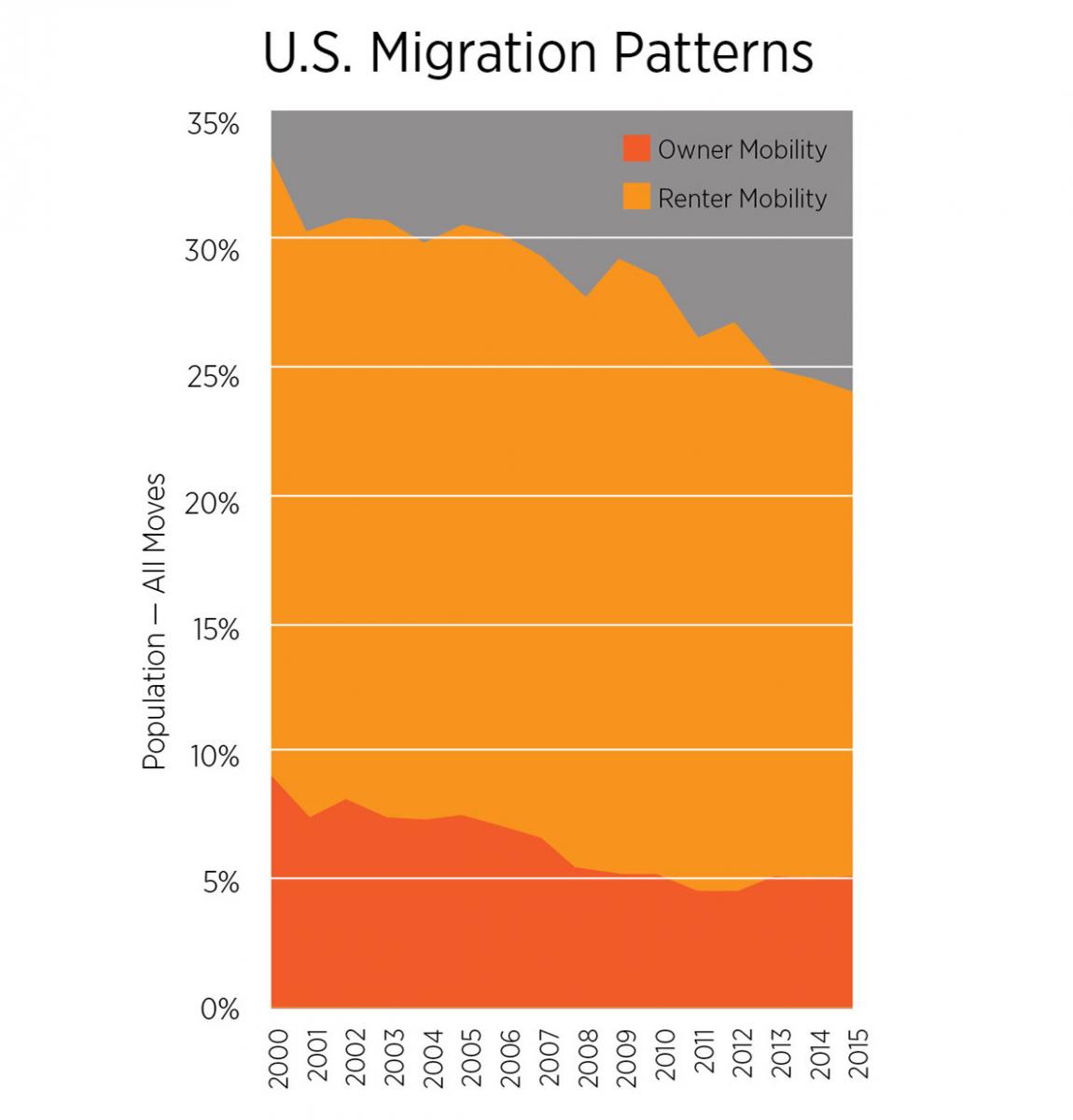 As homeowners have begun to regain equity over the past several years, their mobility has picked up slightly and leveled off in the 5 percent range. Renters, on the other hand, continue to sit tight with rents for new leases rising while renewals often increase at a lower rate, making them more financially attractive. Keeping in line with Census data, the NAA Income & Expenses Survey shows apartment turnover rates trending downward since 2000. However, thanks to high rates of new construction and an ultra-competitive environment, apartment owners who retain residents can still augment their rent revenues at a fairly healthy rate. 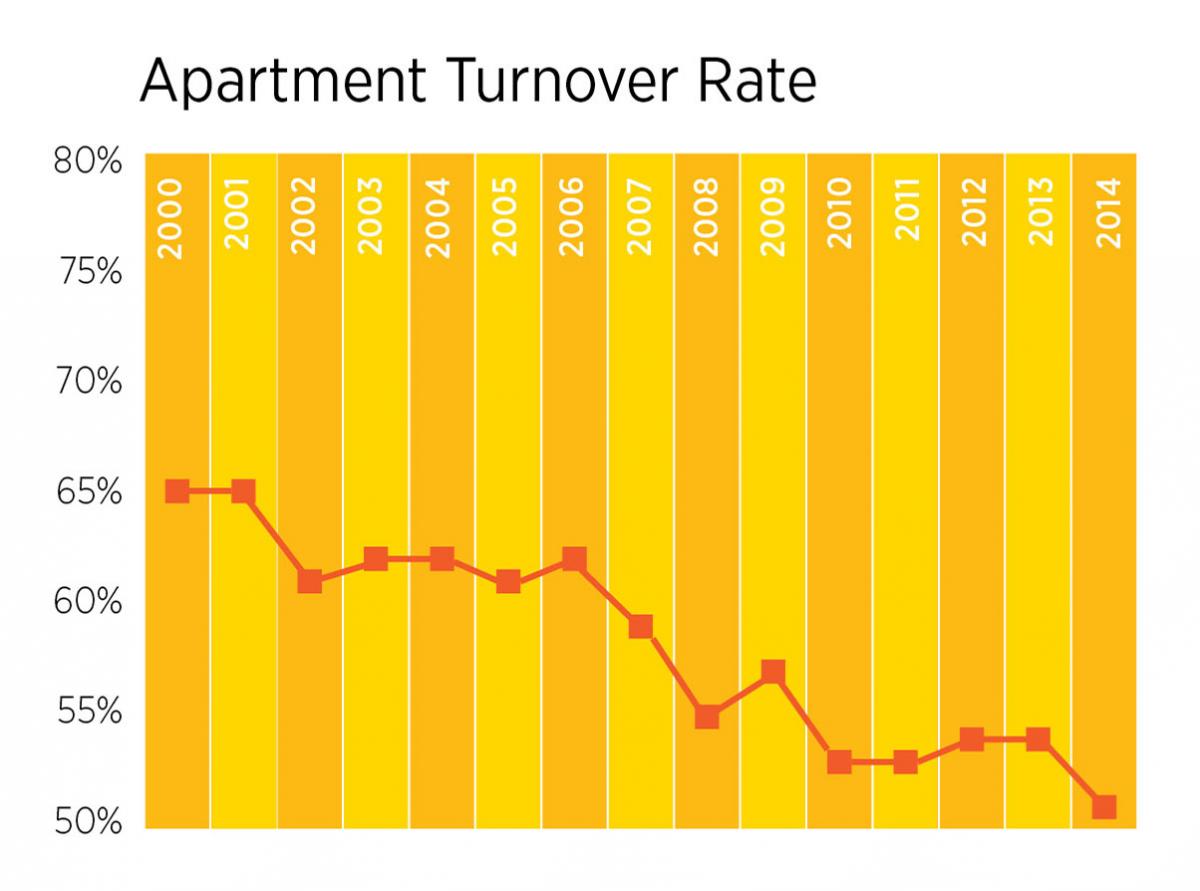 So now that we've established that we generally have fewer moves in the U.S., the fact is that a large proportion of renters (24 percent) changed residences between 2014 and 2015. Why? Changing housing, such as buying a home or "right-sizing" an apartment, remains the number one reason for moving, averaging about 45 percent for the past 15 years, compared to 20 percent of renters who moved for jobs during the same time period. Clearly, job-related reasons increase during periods of economic expansion, as shown in the chart below. Family-related motives are the second largest reason for moving, covering change in marital status, establishment of a new household, and the nebulous "other" which unfortunately makes up the largest proportion of family reasons without offering much insight. 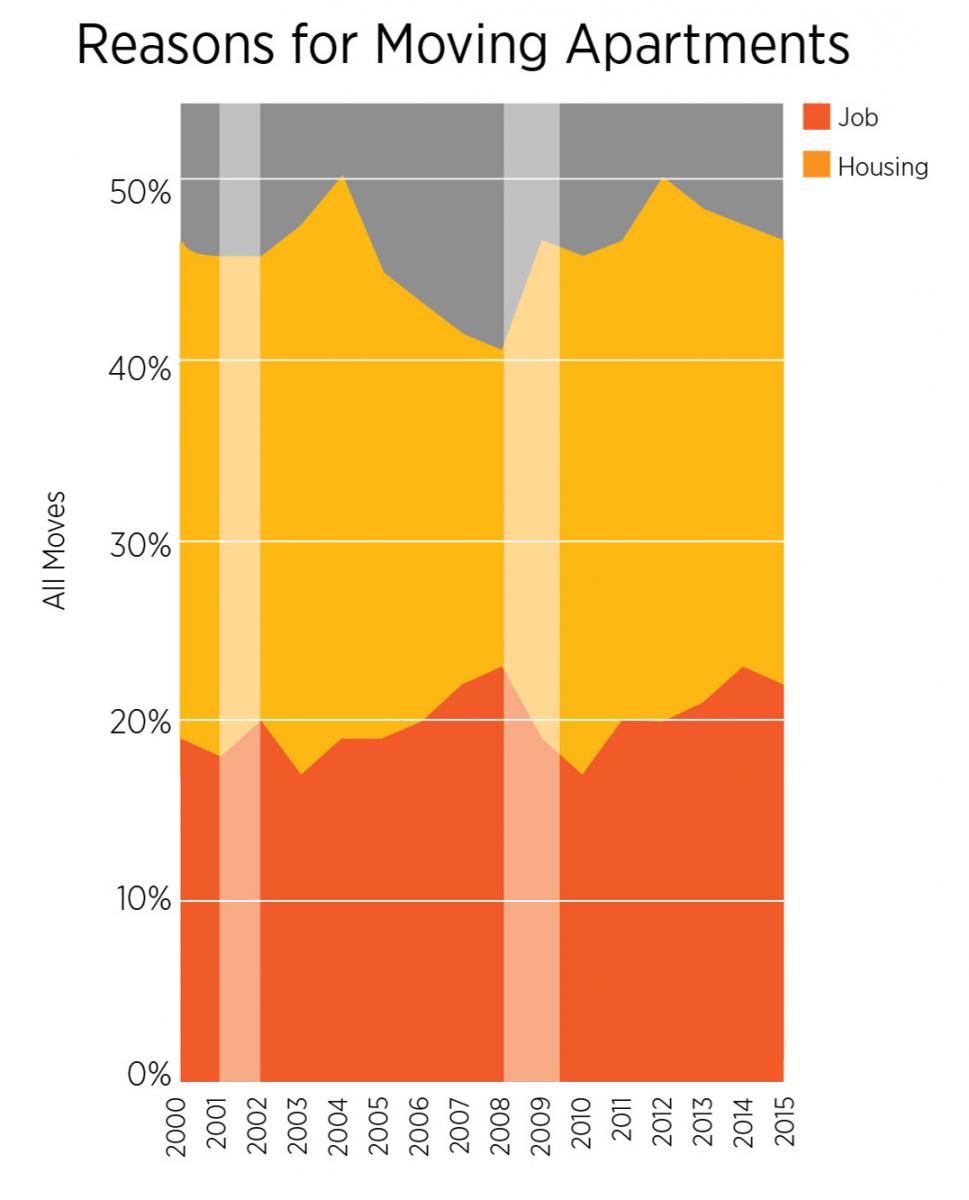 Finally, drilling down to specific housing-based moves for renters, a new or better apartment remains the number one reason for moving, but has slipped since 2000, along with leaving for a better neighborhood. Financial considerations have become increasingly important, with more than a fifth of renters moving for less expensive space last year. 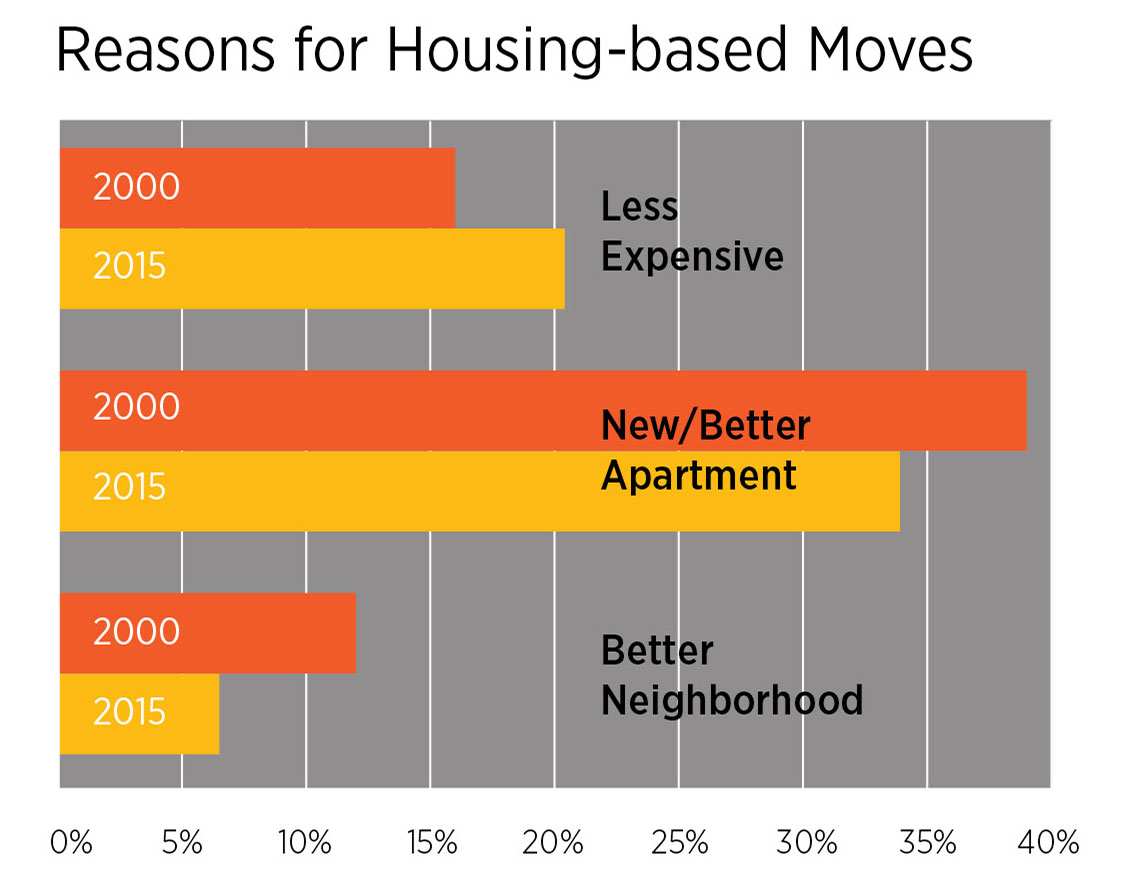 With most analysts in consensus that this apartment housing cycle is past its prime, as evidenced by potential oversupply and peak pricing in some market segments, we may very well see renter mobility rates pick up somewhat in the coming years. Regardless of the fact that renters are actually moving less, the peace of mind that comes from knowing you can pick up and go for any opportunity life throws your way no doubt remains a compelling incentive for renting over buying.

The Transformation of Parking
Multiple factors are converging to disrupt everything we know about parking: Its physical structure, format, design, cost and, perhaps most important,...
Read More
IES: Owners & Employees Feeling the Fray of Labor Constraints
Following a year of moderate growth and solid fundamentals in 2018, the first six months of 2019 make that past year seem like a lull for the...
Read More
Steady Growth in the U.S. Apartment Market
As rent growth slows, and some lenders have their fingers ready to hit the pause button, the concerns over an imminent bubble are beginning to...
Read More
Staying Lean: Apartment Owners and Operators Proceed With Caution
The apartment industry marked 2017 with slowing rent growth, a healthy amount of new supply and the leveling of occupancy rates. Data varied...
Read More
Fall 2019: Demand Fuels Occupancy Growth
U.S. Apartment MarketStrong apartment demand continued to be powered by job growth, demographic trends, and economic shifts. According to RealPage,...
Read More