Slowing global growth and uncertainties surrounding trade wars and tariffs held businesses at bay in 2019 in terms of spending, but consumers stepped in to prop up economic activity. According to Moody’s Analytics, households have contributed approximately half a percentage point to GDP growth over the past year. The latest read from the December release of the University of Michigan’s Consumer Sentiment Survey showed an increase to 99.2, the highest level since May. The survey has averaged 97 for the past three years, which is the longest, sustained level of optimism since the 1990s.

The final jobs report of the year was a compelling one with the Bureau of Labor Statistics reporting the addition of 266,000 jobs in November, handily beating the prior monthly average of 167,000. Upward revisions were also made to the September and October employment counts while the unemployment rate returned to its 50-year low of 3.5 percent.

The recently released Outlook Survey from the National Association for Business Economics (NABE) revealed a consensus for slower growth, but no recession in 2020. It is worth noting that the survey was conducted prior to the November jobs report.

The outlook for commercial real estate is “moderately positive” for the next 18 months, to quote a recent Deloitte survey of U.S. commercial real estate executives. In terms of the apartment sector, respondents were neutral on occupancy levels and the cost of capital, but viewed rent growth, capital availability and transaction activity as somewhat favorable.

Despite all the talk of impending recessions, stagnant business investment, trade wars and a volatile stock market, in 2019 the apartment industry was marked by higher occupancy rates amid relatively robust levels of new supply and rent growth exceeding long-term averages. Apartments remain a favored asset class for investors with volumes up 6.4 percent year-over-year through the third quarter and average price per unit growth flirting with 10 percent, based on data provided by Real Capital Analytics.

Monthly Census building permit data showed weakness at the beginning of the year, but have ramped up since July, averaging year-over-year increases exceeding 20 percent through October. At this rate, permits are poised to exceed last year’s levels.

Approximately 328,000 new units are needed in the U.S. each year just to keep up with demand. That figure has only been realized twice since the late 1980s, in 2017 (the peak year for completions) and 2018 and is on track to just make it in 2019, according to CoStar. Although some segments of the market may be approaching overbuilt status (luxury, urban core, specific submarkets), supply is still falling far short of demand in many areas across the country. In 2018 and 2019, absorption outstripped demand by an estimated 73,400 units and the current pipeline for 2020 shows fewer units coming on-line than 2019.

2020 housing start forecasts for multifamily properties range from 375,000-400,000, about on-par with 2019 estimates. Single-family starts are projected to post slight increases. The National Association of Realtors (NAR) reported less than four months’ worth of supply of existing single-family homes available for sale in October. Unless new construction of for-sale homes picks up significantly next year, low mortgage rates, which have fallen by more than 100 basis points over the past year, will not be enough to offset a simple lack of supply available to potential purchasers. 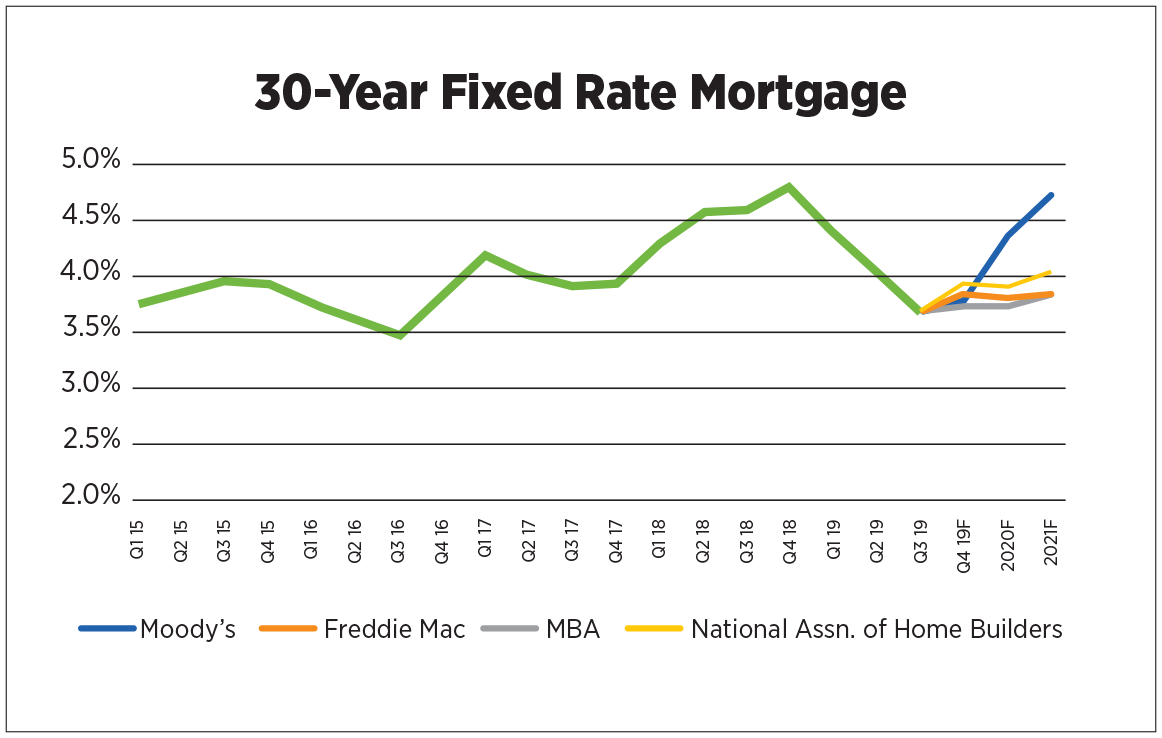 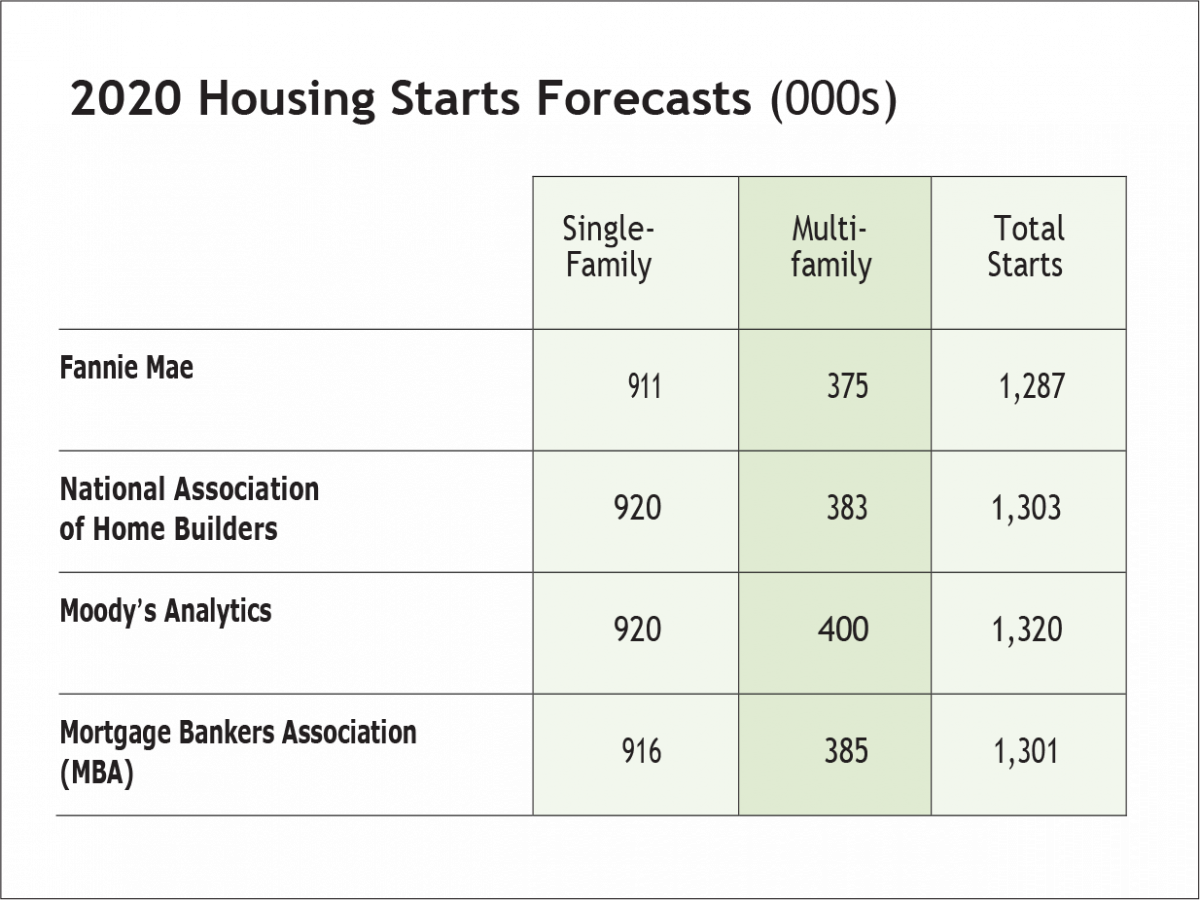 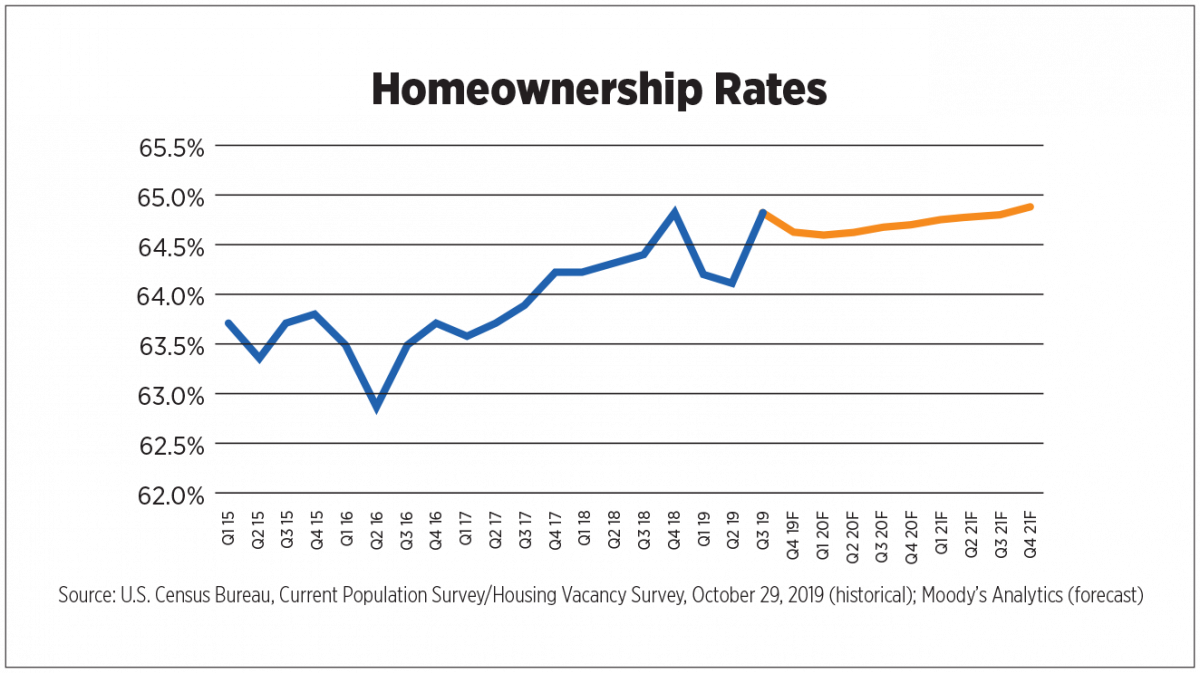 After trending steadily upwards for two and a half years, the homeownership rate dropped for two consecutive quarters this year before rising in the third quarter back to its Q4 2018 level of 64.8 percent. Census Bureau figures reveal that the largest increase in homeownership over the past year occurred among younger Gen X-ers aged 40 to 44, a 2.6 percentage point shift. The greatest decrease this past year was among mostly older Millennials (35 to 39 years of age), which dropped a full percentage point. Moody’s Analytics’ forecast keeps the homeownership rate under 65 percent over the next several years, well below the peak of 69.2 percent in 2004. 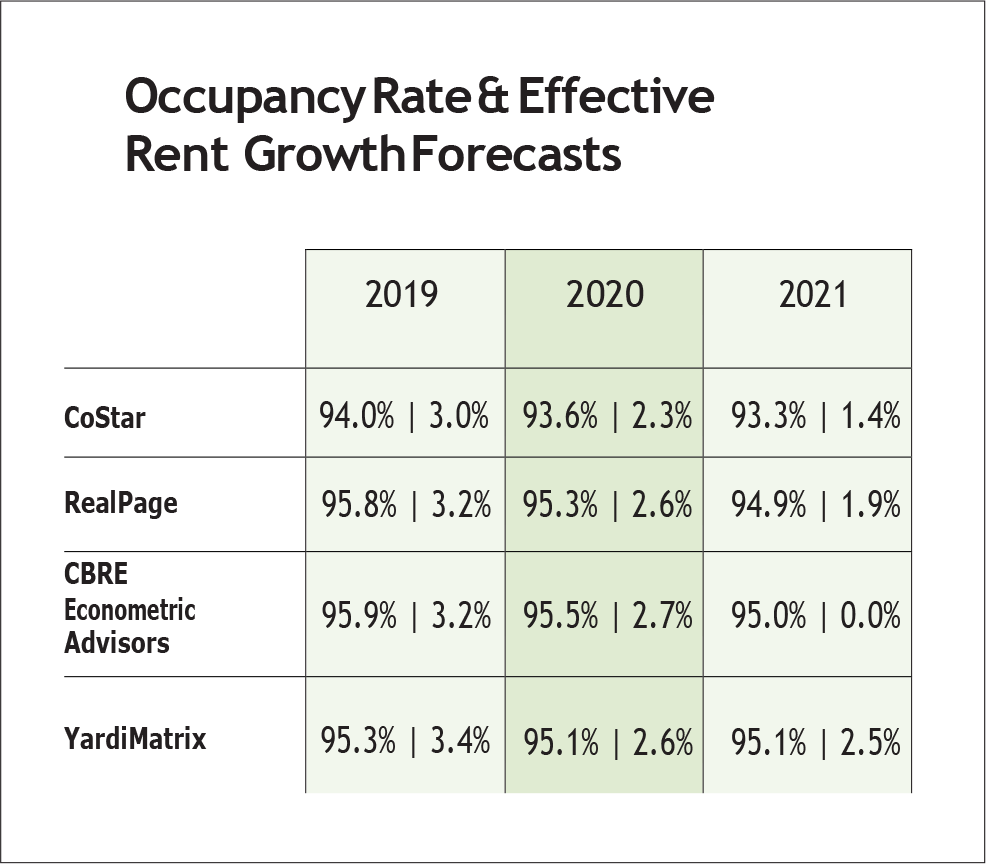 Private sector apartment data providers are in agreement with slipping occupancy rates in 2020 and 2021 and rent growth progressively slowing over the next two years. But occupancy rates dropping from near-all-time highs certainly does not portend doom. Rent growth below two percent, when inflation is forecast between 2 to 2.5 percent is noteworthy, however. In addition to focusing on alternative sources of revenues, owners and operators will need to bump up efforts to reduce operating expenses, a challenging prospect amid the current environment of mounting property taxes and rising wages.

Demographic, economic and societal factors continue to favor the apartment industry, even with expectations of decelerating economic growth. The trend of delaying marriage, children and homeownership shows no signs of easing. The NAR reports an all-time high in 2019 for the age of first-time home buyers, 33 years old, up from 29 when the data series began in 1981. According to Freddie Mac’s survey of renters and homeowners released in mid-2019, 39 percent of renters think it is not very to not at all likely that they will ever own a home, the highest percentage since Freddie started conducting the survey in 2015. Of renters who say they can afford to buy now, 24 percent feel that renting is a good choice right now, also a survey high. Additionally, 59 percent of renters plan to rent their next residence and an astounding 80 percent of apartment renters say renting is a better fit for their current lifestyle.

With overall wage growth still lagging in strength compared to other labor market indicators, affordability will remain a challenge for all types of housing in 2020. Adverse policies stemming from initiatives to fix the deep-seeded and complex causes of housing affordability will likely be the biggest risk to the industry in 2020 and beyond.