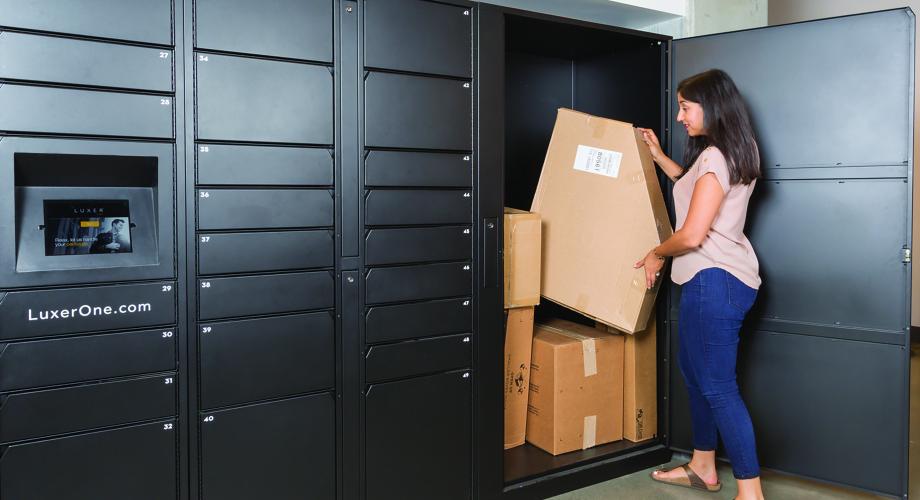 As apartment communities continue to struggle with increased package delivery, some are instituting storage solutions and fees to cover the administrative costs of this service.

Some apartment communities are now charging residents storage fees for packages to help free up space in the leasing office, to discourage delays in pickups or to offset the cost of installing package locker systems in their common areas.

Developer Patrick Kennedy, of Panoramic Interests in San Francisco, operates a 160-unit property and charges a dollar per package and $1.50 per day after an item spends 48 hours in the locker. He returns packages that aren’t picked up within seven days.

Kennedy installed the Luxer One locker system last July, two weeks before the first resident moved into the community. He hasn’t received complaints about the fees from any of the 400 residents who are charged to use the system. His property receives an average of 35 packages per day, or about 1,050 per month.

“The busiest weeks for package delivery for us were the weeks after Black Friday and the week of Cyber Monday,” Kennedy says. “Even with the steep increase in packages received, we always had package lockers available through the entire holiday season. Our student residents are very good about promptly picking up their packages, because they receive real-time notice of package arrival to their mobile devices.”

Lori Torres, founder and CEO of package-locker firm Parcel Pending, has seen clients charge residents $3.50 to $5 per month to have unlimited access to the lockers.
Another package-locker provider, Package Concierge, has some clients that charge $20 at move-in and $3 per day after a package has been stored more than five days, according to company CEO Georgianna Oliver.

Craig Meddin, president and CEO of US Postal Solutions, predicts that package-acceptance fees will become the new pet fees/pet rent.

“It will become common to charge package-acceptance fees,” he says. “I hear other apartment-industry leaders agreeing. You might see, for example, a $99 annual package-acceptance fee or, perhaps, caps on acceptance of the number of packages that a resident can receive per month for no charge, and then ‘overage’ fees applied to the excess.”

Package delivery may also become simpler, especially with the popularity of drones. More than 181,000 drones have been registered with the Federal Aviation Administration since a database was set up in December 2015. As The Washington Post reports, companies such as Amazon, Google and Flirtey have also promoted plans to incorporate drones into their delivery options.

However, the paper notes that two major obstacles may stand in the way of making this method of delivery a reality: urban landscapes and U.S. airspace rules. The former may not allow space for drones to safely land, while the latter may prevent them from flying low over a neighboring property. And, of course, there’s always the potential that a curious dog or child could tamper with the drone and either get hurt or damage the delivery vehicle.

How drone deliveries would work in a high-rise-apartment setting also remains to be seen. But they could be another option to add to the mix sooner rather than later.