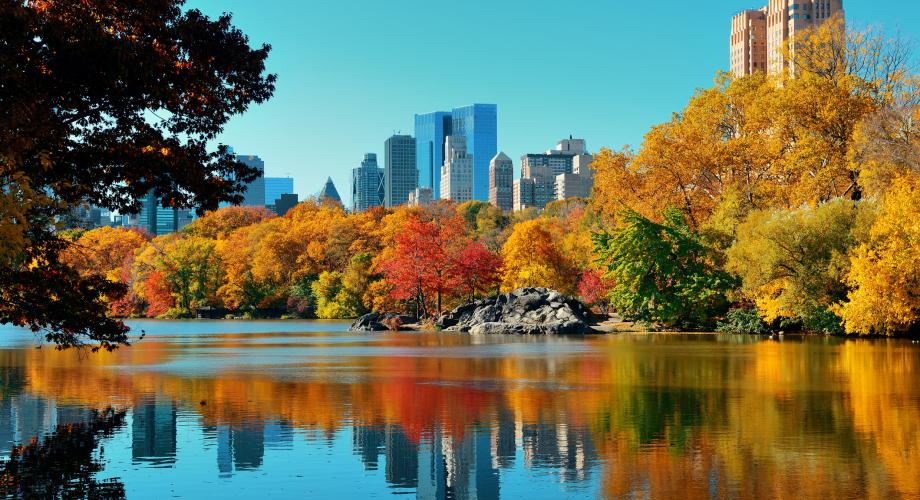 Since 2021, apartment demand had been at record levels as people left cities for suburbs; however, in more recent months, there has been a sudden slowdown in apartment demand because of a halt in new household formation. As the economy becomes more uncertain due to inflation and fears of a recession, many would-be renters who are skeptical about their future choose to postpone moving into their own apartments.

The slowdown in the economy has caused apartment demand to drop well below third-quarter averages. According to RealPage, Q3 2022 marked the first time in the firm’s 30 years of tracking U.S. apartments that demand registered negative during a third quarter period. Annual absorption plunged to 77,936 units. This was far lower than the 338,398 units that came online. As a result of reduced demand, the national occupancy rate dropped to 95.9%, the lowest level since Q1 2021. 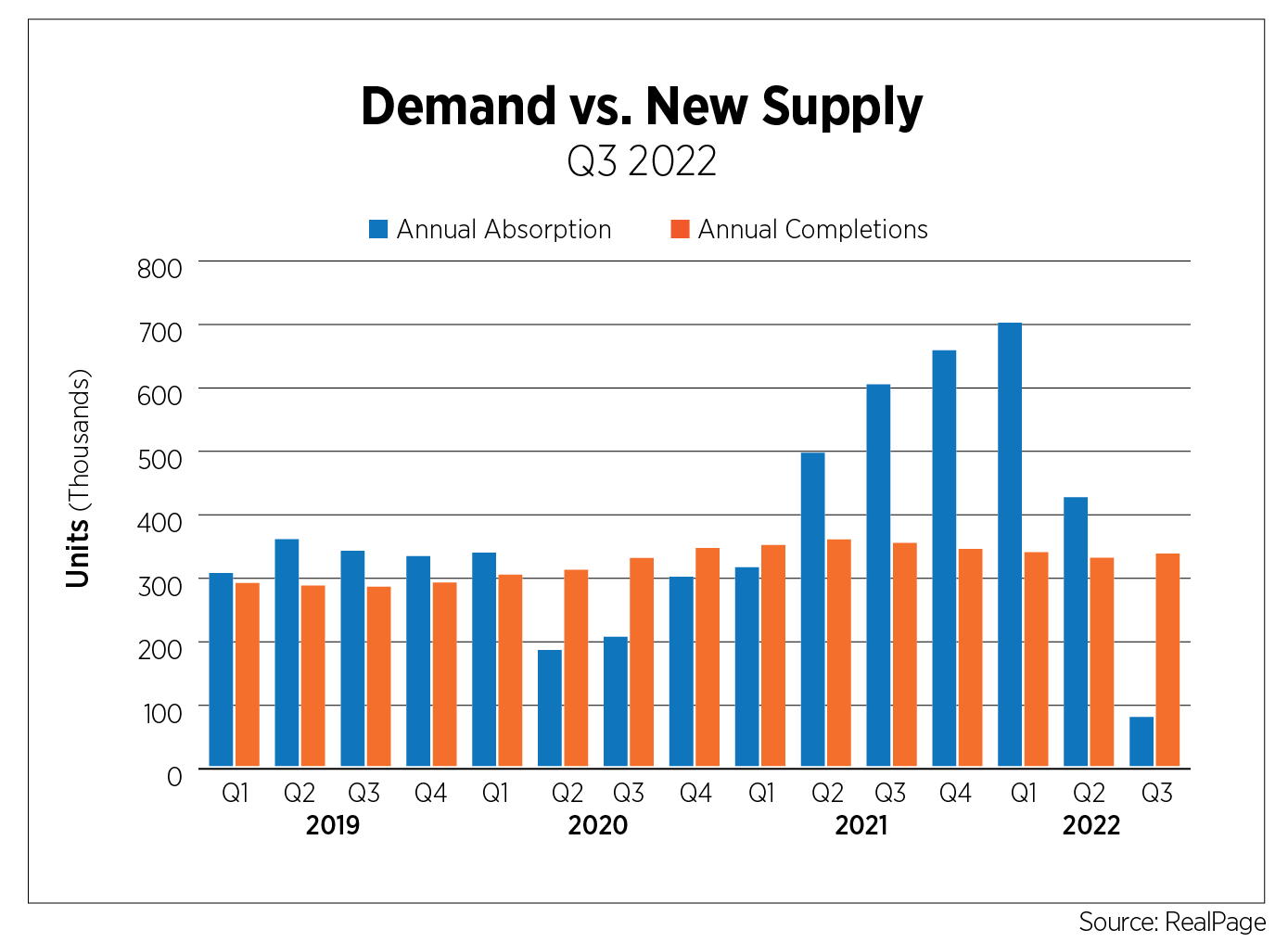 Developers continued to see the cost of materials and labor increase, although there has been some relief. According to CoreLogic’s Quarterly Construction Insights, the cost of lumber and plywood peaked in April 2022 and has been a decline ever since, but the cost is still elevated compared to prior years. Most notably, the cost of PVC pipe went up 47% between January and August. Looking at labor costs, companies paid over 2% more for Teamsters, plasterers and painters in August than they did in January.

While construction costs are high, multifamily construction activity delivered an impressive performance during the third quarter. According to the U.S. Census Bureau, the seasonally adjusted annual rate for multifamily building permits jumped 25.5% year-over-year to 644,000 units in September. Construction starts totaled 530,000 units, an increase of 16.5%. Units completed increased by 33.3% to 376,000 units.

Despite a drop in demand, the apartment sector continued to record healthy rent growth, although at a slower pace. As reported by RealPage, effective rent increased nearly 13% year-over-year to $1,790. Looking at a quarter-to-quarter change, however, rent growth decelerated by 0.7 percentage points during the third quarter. The slowdown in apartment demand caused apartment owners and operators to be more strategic with how they attract residents. According to data from CoStar Group, concessions for existing market-rate properties increased slightly from 0.59% in Q2 to 0.67% in Q3. According to REIS, the top-ranking markets for annual effective rent growth included Seattle; New York City; Greensboro, S.C.; Boston; and Charleston, S.C. In contrast, Minneapolis; suburban Maryland (Montgomery and Prince George’s Counties); Sacramento, Calif.; Little Rock, Ark.; and Wichita, Kan., saw the slowest rent growth. Charleston was also among the top five markets for improved vacancies. The Charleston metropolitan area has seen significant economic growth as manufacturing companies including Boeing, Volvo, Mercedes-Benz and Bosch have recently expanded there. This growth has brought new employment opportunities and renter demand to the area.

In late September, Hurricane Ian ripped through southwest Florida and the Carolinas and caused devastation to various communities. Many people, particularly along Florida’s Gulf Coast, completely lost their homes. A recent report from CoreLogic estimates insured and uninsured damages for Hurricane Ian to be between $41 billion and $70 billion. The aftermath of Hurricane Ian is expected to slow construction and drive-up rents in southwest Florida markets. 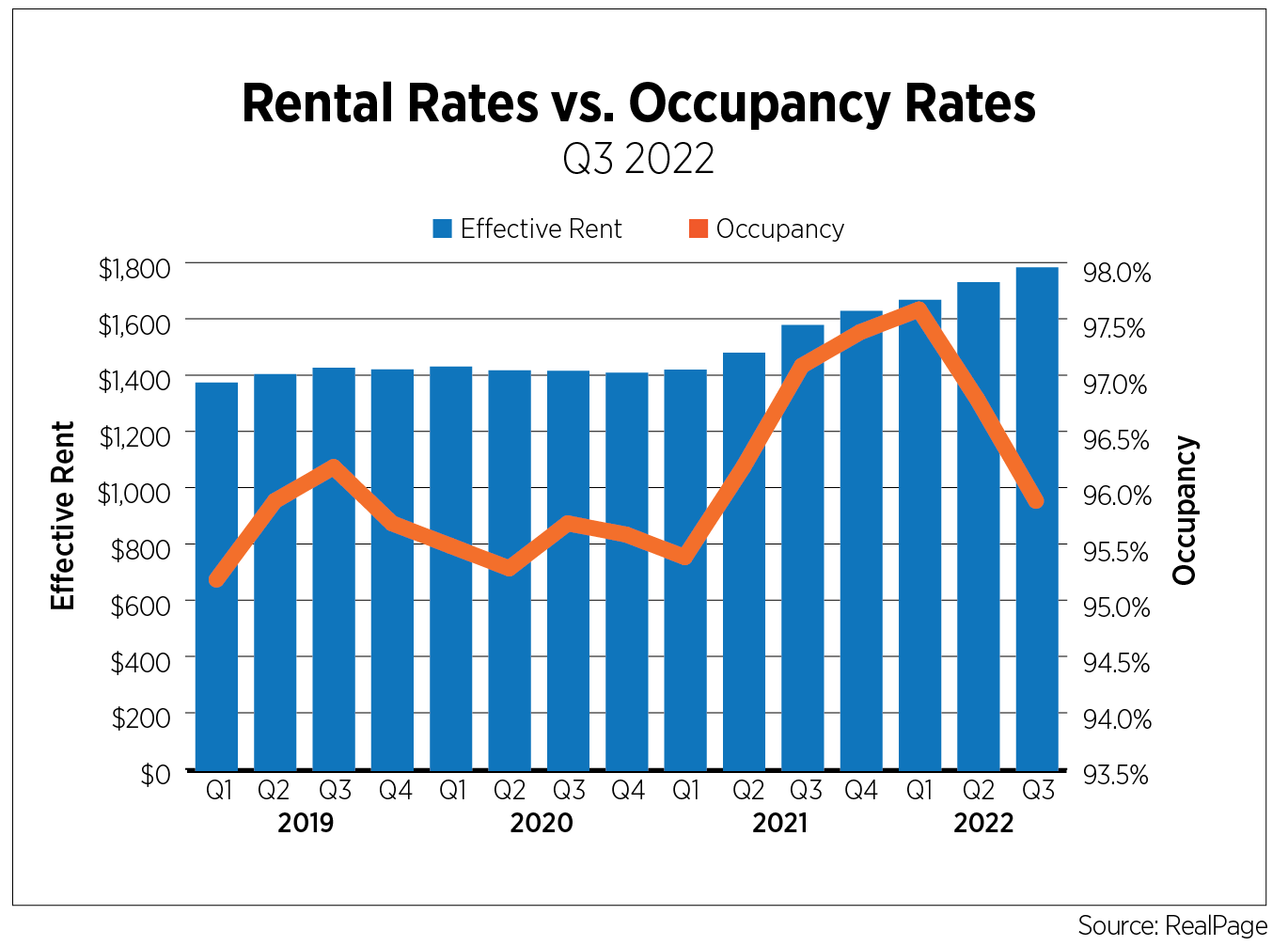 According to Real Capital Analytics, closed apartment sales transactions during Q3 2022 totaled $46.5 billion, decreasing by 45.1% year-over-year. The decrease in deal activity is likely due to the rise in interest rates, which has made financing more expensive and has caused some investors to pause their purchase decisions. The average price per unit for properties that traded in the third quarter was $253,471, a 16.5% increase from the same quarter last year. Investors exchanged nearly 211,446 units, a 50.6% decline from the previous year. The average cap rate was 4.5%, down 20 basis points. As cap rates continue to fall, experts predict this trend will lead potential buyers into lowering their offers due to rising interest rates and the increasing cost of capital. 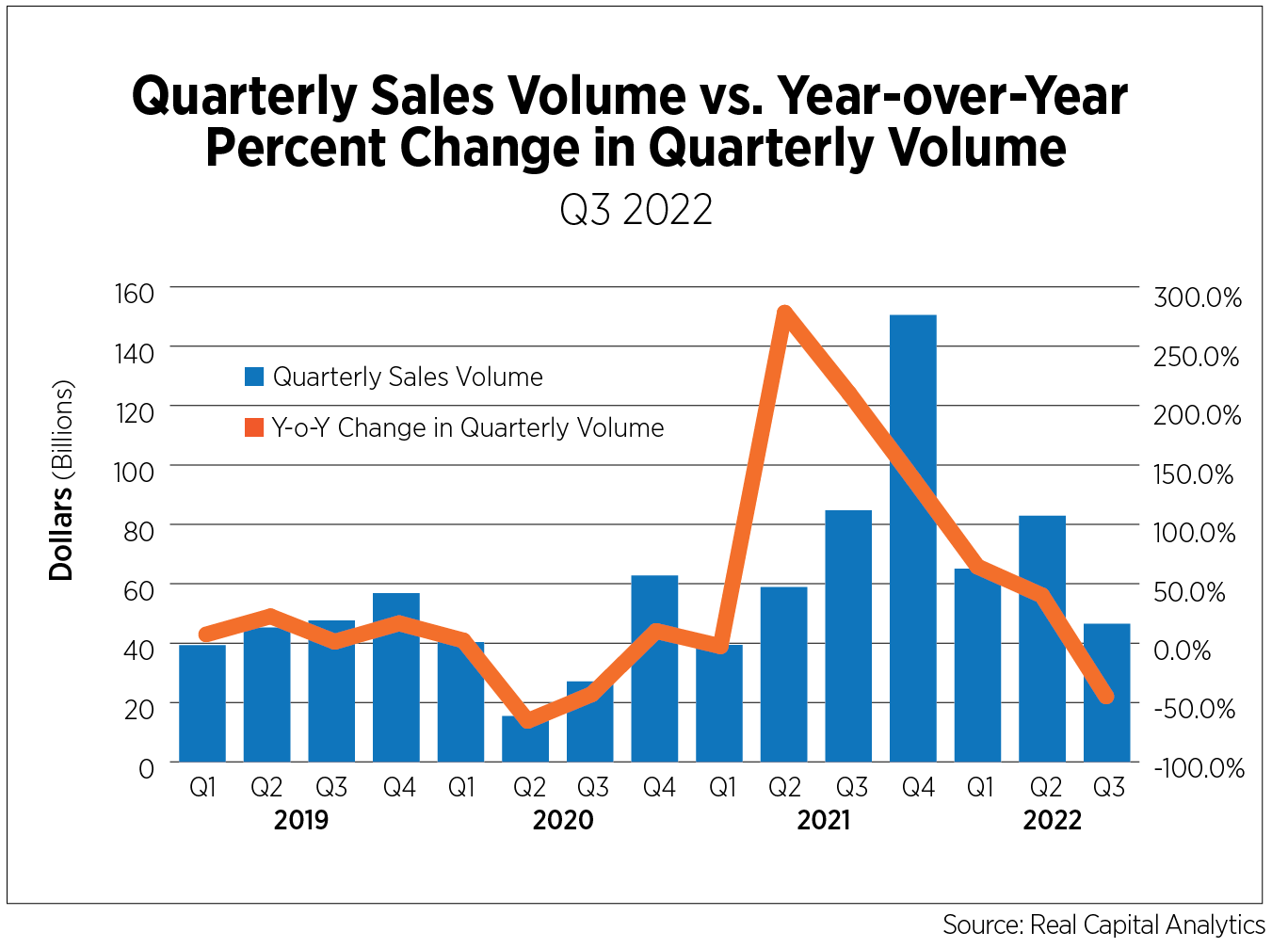 Demand for build-to-rent (BTR) apartments remained solid as more Americans found it more difficult to afford homeownership amid soaring interest rates. The U.S. BTR sector’s rent growth rate has slowed down but still posed a gain of 10.3% since the same time last year. Of the top 32 BTR markets tracked by Yardi Matrix with 50 or more units, Washington, D.C.; Orlando, Fla.; Toledo, Ohio; Nashville, Tenn.; and San Antonio had the highest annual rent growth in September. Atlanta was the only market that registered negative year-over-year rent growth. 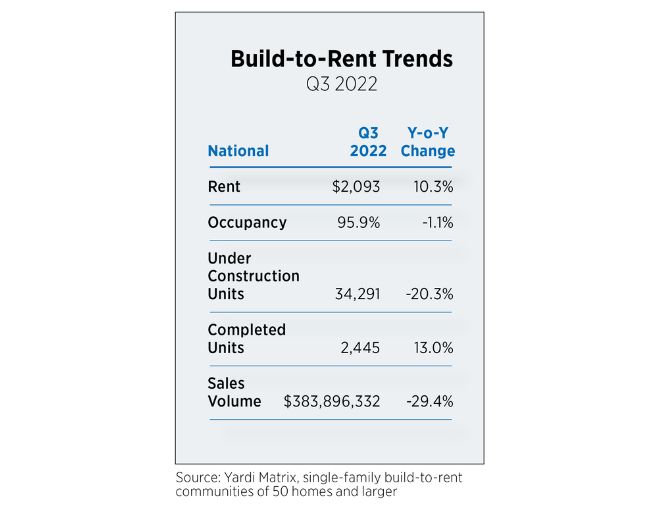 Cracks are beginning to be revealed in the labor market, although indicators remain weighted toward the positive. Job growth, unemployment rates and initial claims for unemployment all point to strong labor market fundamentals. Layoff announcements surged in September but were down more than 21% year-to-date from last year, and the Q1-Q3 period was the lowest on record since Challenger, Gray & Christmas began collecting the data in 1993. Job openings dropped by about 890,000 in August, an initial indication that some companies might be pulling back on expansion plans, but September’s reading showed a 437,000 increase. There are still 1.9 jobs for every unemployed person in the U.S.

Employment growth slowed in September to 263,000 jobs, but at a 420,000 monthly average this year, remained well above long-term trends. The unemployment rate dropped back to its 50-year low of 3.5%, largely due to a slight decline in the labor force participation rate. Initial claims for unemployment have been running below the 250,000 per-week threshold, which is indicative of a healthy labor market.

At 10.7 million, job openings remained well above pre-pandemic levels, with the leisure and hospitality sector still leading the way and responsible for half

the increase in openings. Education and health services job availability jumped by 138,000. Openings decreased in the wholesale trade sector (-104,000) and in the finance and insurance sector (-83,000), which has experienced declines for three consecutive months due in part to the strain that soaring interest rates have put on financial markets.

Quit levels have come off their peak of 4.5 million in November 2021, but remain at historic highs. Employees quitting for other jobs are contributing to wage increases lingering at or above 5% year-over-year as switching jobs typically comes with a loftier raise than staying in place. Sectors experiencing the highest level of quits were professional and business services and state and local government. 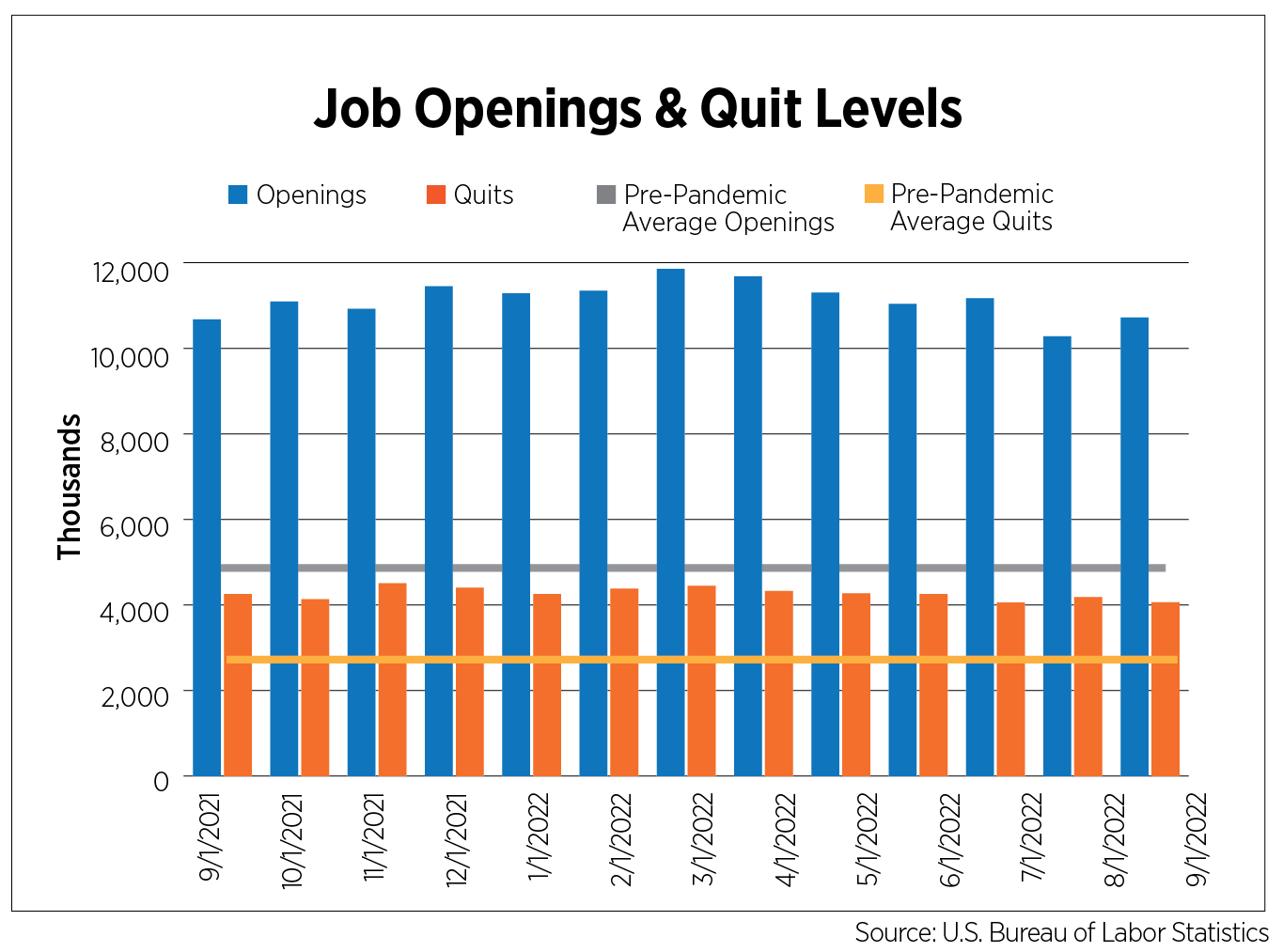 For-sale housing has emerged as one of the weakest links in the economy. Driven by 20–year high mortgage rates, a runup in house prices and low inventory, existing home sales have decreased by 27% since January. Additionally, the National Association of Home Builders Housing Market Index, which measures homebuilder sentiment, was at its lowest level in 10 years. Sales prices have weakened but have not quite caught up to the deteriorating market conditions. Both the Case-Shiller and U.S. Federal Housing Finance Agency home price indices showed their first monthly price declines in July, but they were less than 1%. Price growth averaged 15% on a year-over-year basis, however. Since peaking in June, the National Association of Realtors median sales price has dropped 7% through September. These slight price reductions are not enough to lessen affordability challenges faced by would-be homebuyers. 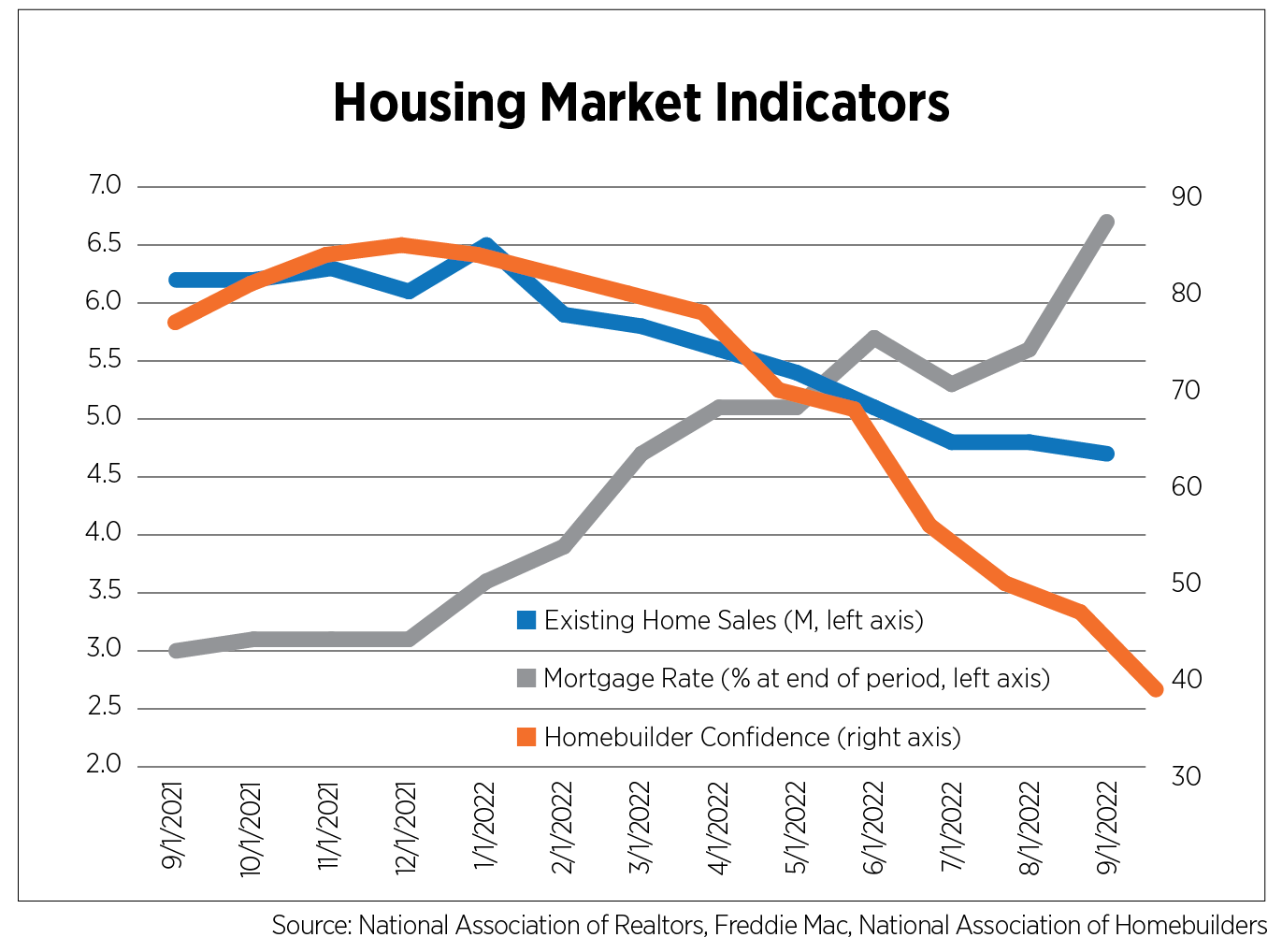 The preliminary estimate of third quarter GDP showed a 2.6% expansion after two quarters of decline. The growth was largely driven by trade, and given the strong dollar, it is expected to be temporary. It did not impact the Federal Reserve’s actions, as they raised interest rates by 75 basis points in November and appear to be on track for another 50 to 75 basis point-
increase in December.

A Bloomberg Economics model forecasted a 100% chance of recession in the next 12 months. A recent Bloomberg survey of economists was also more pessimistic with the probability of recession at 60%, up from 50% just one month earlier. CEOs of major corporations have been advising businesses and consumers to ready themselves for an upcoming downturn. The severity and duration remain major unknowns, although most economists are predicting a mild recession starting anytime within the next three-12 months.

Household formation has already begun to slow, supply is outpacing demand in some markets and rent growth has decelerated and even turned negative, according to some private sector data providers – all signs of normalization in the apartment market. Jobs and wages continue to grow, albeit at more subdued levels, which will keep apartment fundamentals solid, if not stellar. If the Fed cannot execute a soft landing and unemployment rates rise significantly, further downward pressure on both occupancy rates and rents are sure to follow.